A 57 year old woman, Barbara Higgins has given birth to a baby boy. Higgins gave birth on Saturday, March 21, five years after losing her 13 year-old daughter to a brain tumor.

The baby who was born a month premature, weighed five pounds 13 ounces, and is now back home and doing well after spending three days at the hospital where he was delivered.

Barbara, from Concord in New Hampshire, US, and her husband Kenny Banzhoff, 65, are delighted with their new arrival.

According to her she desired another child after her daughter Molly’s death in 2016.

She said: ‘In 2016 my daughter Molly died from an undiagnosed brain tumor. (It) was a traumatic, life-altering, horrifying experience. It hobbles you completely.’

Barbara said that she began to have dreams about having another baby while mourning Molly.

She added: ‘It was a pretty persistent dream. I’d wake up with an overriding feeling that I need to have another child. I was 53 at the time.’

“I attached [the dreams] very much to my grief process, and a couple of years went by where I had this sort of compelling thought in my head that I should have a child,” she told the TODAY show. “The dream was pretty consistent.” 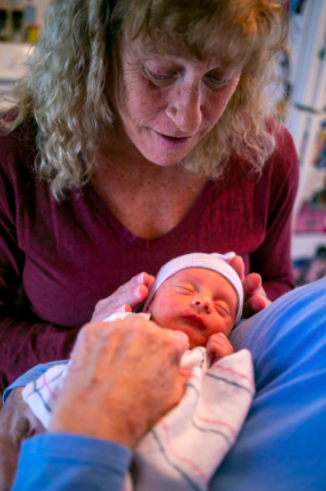 After finding an IVF clinic in Boston that would treat someone Higgins’ age, the couple reportedly decided to move forward with the pregnancy.

Higgins also credited her active lifestyle for a smooth third pregnancy, sharing that she had been weightlifting up until the day she went into labor.

“I do a lot of weight training and all of that crazy Crossfit stuff that you hear about,” she told NBC Boston.

As for having a child at 57, which makes her the oldest woman to ever give birth in New Hampshire, according to the Concord Monitor, Higgins said her age wasn’t a factor in deciding to have another baby.

“Nobody can give birth to a baby and know with a certainty that they will see that baby grow up,” she told the outlet, adding to TODAY that she was “not concerned about external judgments or factors.”