Westfield has made the stunning admission its interactive screens are watching customers after a shopper noticed a mysterious camera in one of the displays.

The hawk-eyed shopper shared footage of the camera at the top of the touch-screen in a Westfield shopping centre to TikTok last week.

‘Hidden cameras at Westfield shopping centres,’ he captioned the video.

The video shows him approaching the information display and slowly zooming in to the top of the screen where a small camera can be seen.

The bizarre discovery quickly caught the attention of social media users who speculated on what the camera was being used for in the comments. 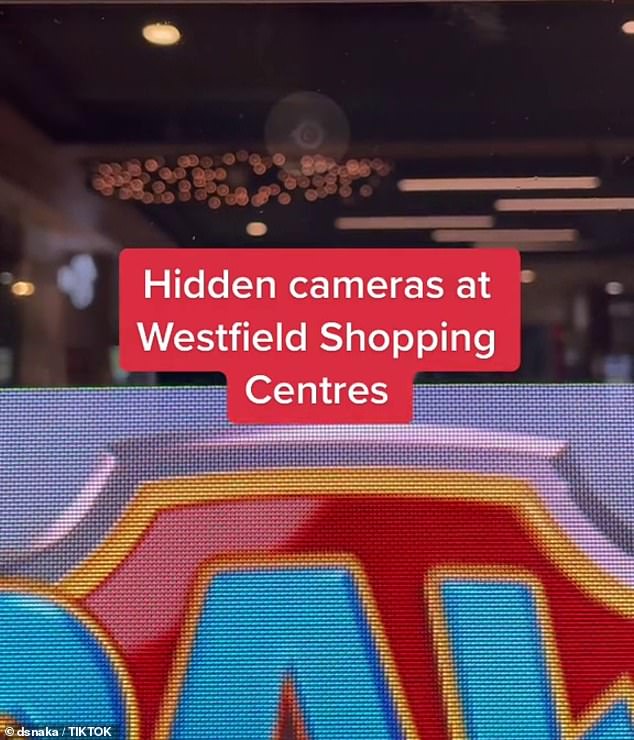 One woman who claimed to work in marketing said the camera was being used to detect customer’s eyes to see if the advertising was working.

‘They’re used to check how many people look at the ad. It’s data collection, same as your phone when you look at an ad too long,’ another said.

‘It’s an interactive billboard, it will have apps built in,’ a third user guessed.

Other commenters suggested the camera was being used for security purposes.

‘Westfield shopping centres are busy places so they use hidden cameras to catch criminals,’ one user stated.

‘I mean, it’s probably a good thing incase something happens. It’s a public place,’ another agreed.

‘It’s just an easy way of having a security camera facing the door,’ a third claimed.

However, others were less impressed with the notion of being unknowingly filmed.

‘I’ll make sure to bring some duct tape next time and cover it up,’ one commented.

‘What! I didn’t even know there was a camera there, sneaky,’ another said. 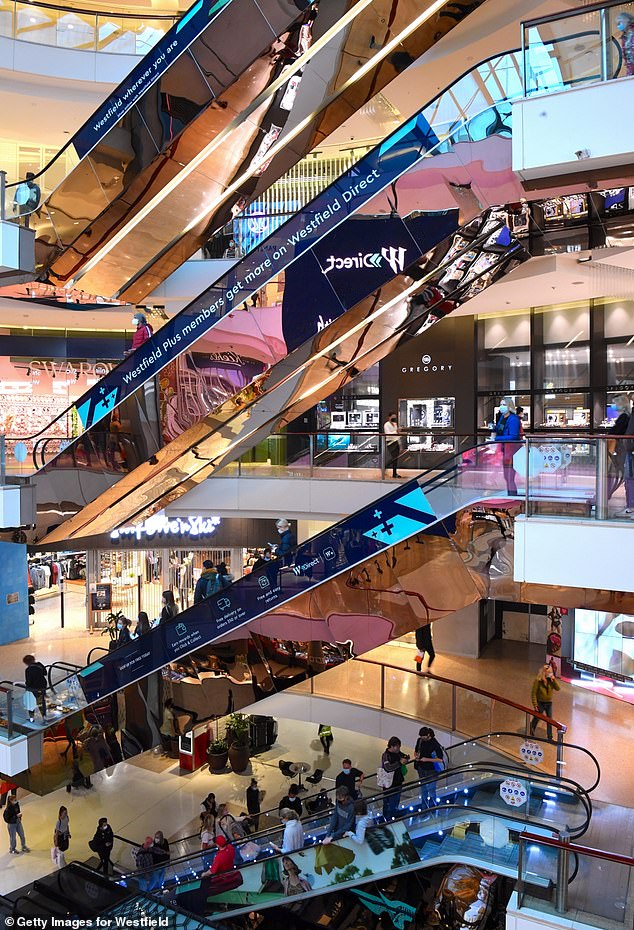 While some users said the camera was used to detect peoples attention to the advertising others disagreed and said it was for security purposes (pictured, Westfield Bondi Junction) 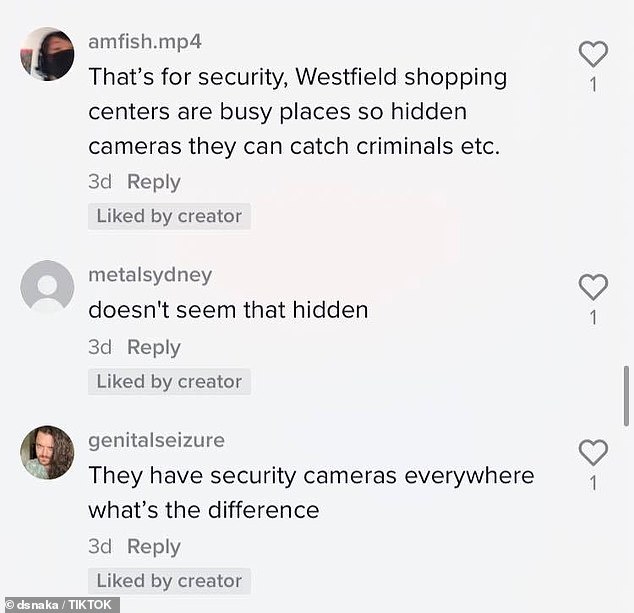 A spokesperson for Scentre Group, which owns Westfield, said the cameras were used to analyse ‘anonymous customer data’ in order improve decision-making and planning.

‘Delivering a superior customer experience across our portfolio of 42 Westfield Living Centres is dependent on access to dynamic customer insights,’ the spokesperson said in a statement.

‘This data helps inform discussions with our business partners – retailers and advertisers – so that we are able to curate the right mix of retailers, brands and services into our centres for our customers.

‘Our SmartScreens use audience measurement and image processing software to aggregate the number of people passing a screen, as well as determine how many people have looked at the screen.

‘These technologies do not identify individuals, or record or retain images of individuals.’

In 2015, the Scentre Group introduced 1,600 screens with the SmartScreen network in over 40 Westfield stores across Australia and New Zealand. 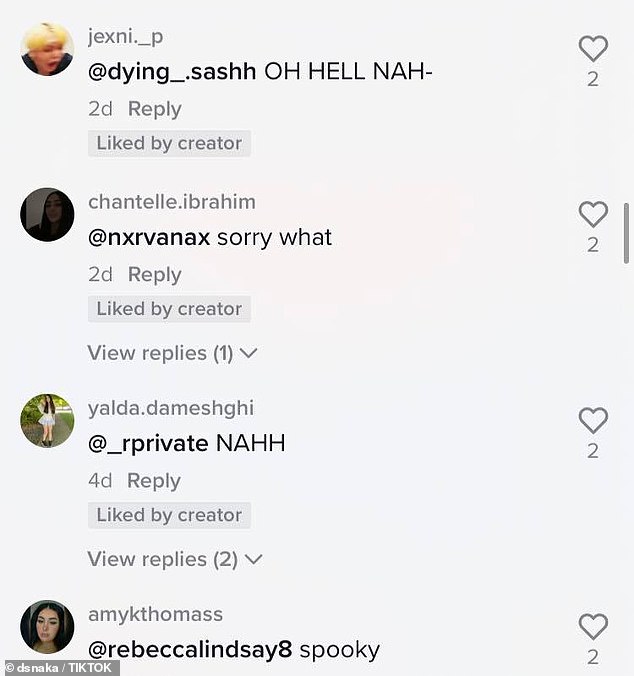 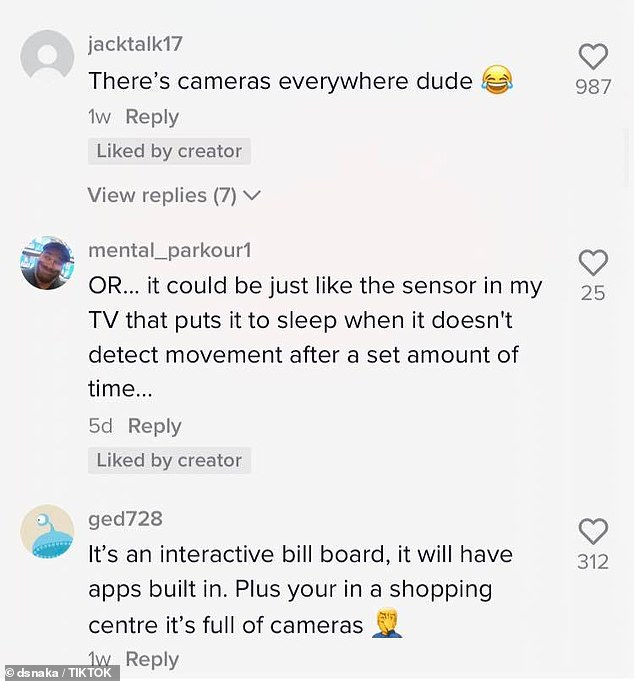 The revelation comes two years after a Singapore Airlines passenger made the alarming discovery his small television screen had a camera embedded inside it.

Soon after Vitaly Kamluk boarded his Singapore Airlines Boeing 787 flight he noticed a tiny camera at the bottom of the in-flight entertainment screen.

Mr Kamluk took a picture of the screen, circling the small camera, and posted it to Twitter asking why it was there.

He tweeted: ‘Just found this interesting sensor looking at me from the seat back on board of Singapore Airlines. Any expert opinion of whether this a camera? Perhaps @SingaporeAir could clarify how it is used?’

Almost immediately, Singapore Airlines responded to Mr Kamluk to confirm it was a camera, but said it was not switched on and that there are no plans to use them as cameras.

The carrier tweeted: ‘We would like to share that some of our newer in-flight entertainment systems provided by the original equipment manufacturers do have a camera embedded in the hardware.

‘These cameras have been disabled on our aircraft, and there are no plans to develop any features using the cameras.’ 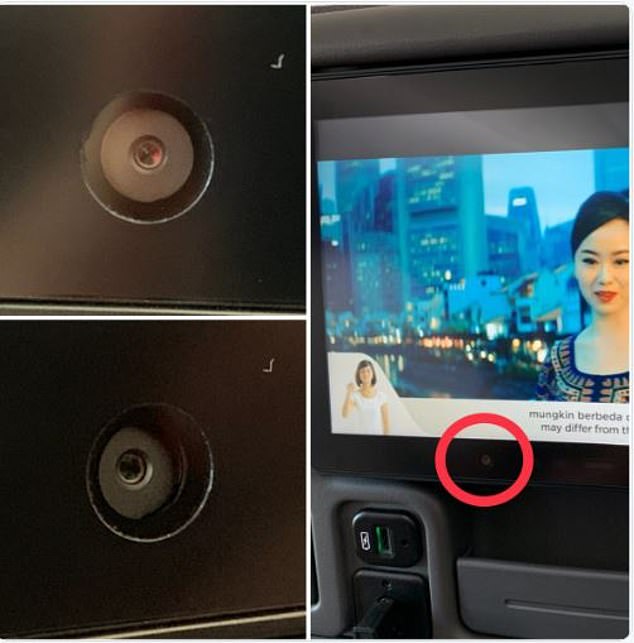 In February 2019, a Singapore Airlines passenger discovered to his alarm his TV screen on a recent flight with the carrier had a camera embedded in it (pictured) 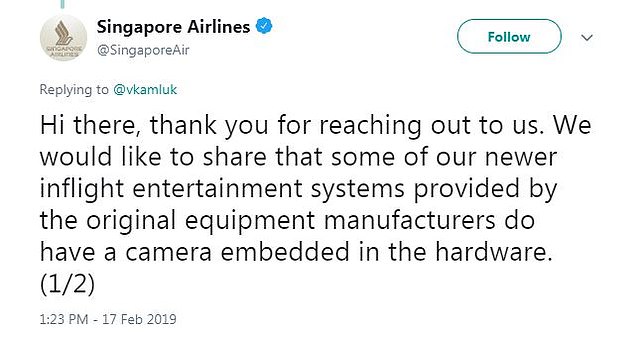 Almost immediately, Singapore Airlines responded to Mr Kamluk to confirm it was a camera, but said it was not switched on and that there are no plans to use them as cameras