A motorist blocked a runaway Volkswagen with his own car after its driver suffered a medical emergency while travelling down along a Dutch highway.

Henry Temmermans, from Gelderland in the Netherlands, spotted the female driver slumped behind the wheel as her car careered along a grass verge.

A third car, travelling behind Mr Temmermans and the victim on the A28 near Harderwijk, filmed the dramatic incident on their dashcam on November 19.

Henry Temmermans, from Gelderland in the Netherlands, spotted the female driver slumped behind the wheel as her car careered along a grass verge on the A28 near Harderwijk

Henry Temmermans, pictured, said his car had been written off after last Friday’s collision

The video shows Mr Temmermans carefully manoeuvring his car in front of the woman’s VW and bracing for impact.

Just before the collision, the woman’s car had been drifting back out towards the main carriageway, placing other motorists at risk.

The footage shows the victim’s car jolt as it crashes into the back of Mr Temmermans’ Ford.

The unnamed woman was taken to hospital with broken ribs.

Afterwards Mr Temmermans told local media: ‘What I saw was not good. It was clear that the lady was no longer conscious.’

He said he decided to accelerate to get in front of the woman and use his car to bring her to a halt as ‘the guardrail would not stop her’.

Mr Temmermans said another motorist pulled over to help the unconscious woman.

He continued: ‘He called 911 and then we looked in the car together. I saw that she had vomited. I still felt a heartbeat in her neck, so that reassured me.

‘I still called her, “Wake up, what happened?” That helped after about 2 minutes.’

Mr Temmermans said his car had been written off as a result of the incident.

He said the woman’s husband and daughter have been in contact with him to express their gratitude to his quick thinking.

Mr Temmermans was invited to his local town hall so civic authorities could honour his actions.

However, Mr Temmermans added: ‘People say on social media that they are proud of me, call me a hero. But I don’t see myself that way. You are obliged to help people in need. I did what I had to do.’

But viewers of the dramatic footage were effusive, with one saying: ‘This dude is amazing! 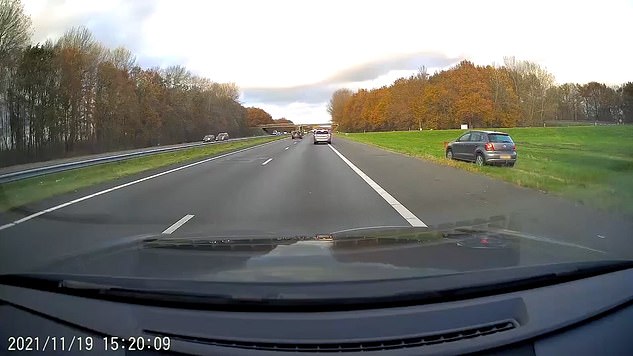 Her car drifted onto the grass verge, while Mr Temmermans pulled onto the hard shoulder to bring the out-of-control VW to a halt

The woman’s VW Polo, pictured extreme right, joined the motorway from the slipway

‘He didn’t just save the driver’s life. He saved a ton of people from getting hurt on the highway.

‘The timing and accuracy was perfect too.’

Another said: ‘That driver has heart and brains. Saved this person’s life.’

Another commentator said: ‘Faith in humanity restored! Not all heroes wear capes.’

Dimitrios Angelakos added: ‘This man is a real life hero and deserves our true respect.’

One more practical-minded fan suggested: ‘I hope the insurance company will pay for the damage of this hero’s car.’