Democrats Joe Manchin and Kyrsten Sinema are receiving a stream of cash from Republican donors as the centrist senators continue to derail Joe Biden‘s liberal agenda in Congress.

With a 50-50 split Senate, even one defector could severely throw off the Democrat agenda – as their best hope is to get all members of the party on board and have Vice President Kamala Harris come in to break the tie.

Billionaire Republican donor Stanley Hubbard wrote his first check to Sinema in September and said he is considering also donating to Manchin.

‘Those are two good people — Manchin and Sinema — and I think we need more of those in the Democratic Party,’ Hubbard said, according to The New York Times.

Hubbard has given an overwhelming majority of his millions in federal political donations to Republicans.

A Sinema spokesman, John LaBombard, said the cash flow from the right side of the aisle has not factored into her legislative approach. 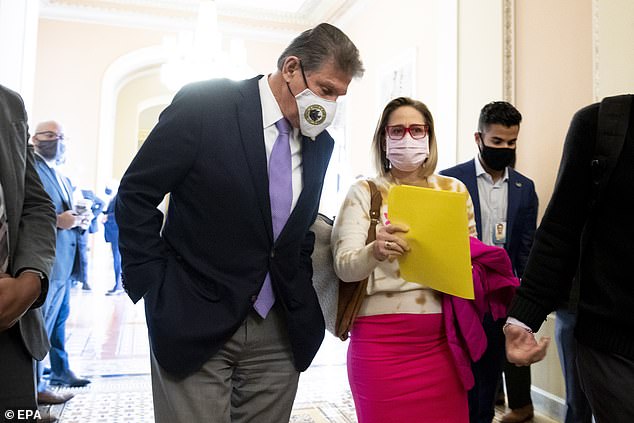 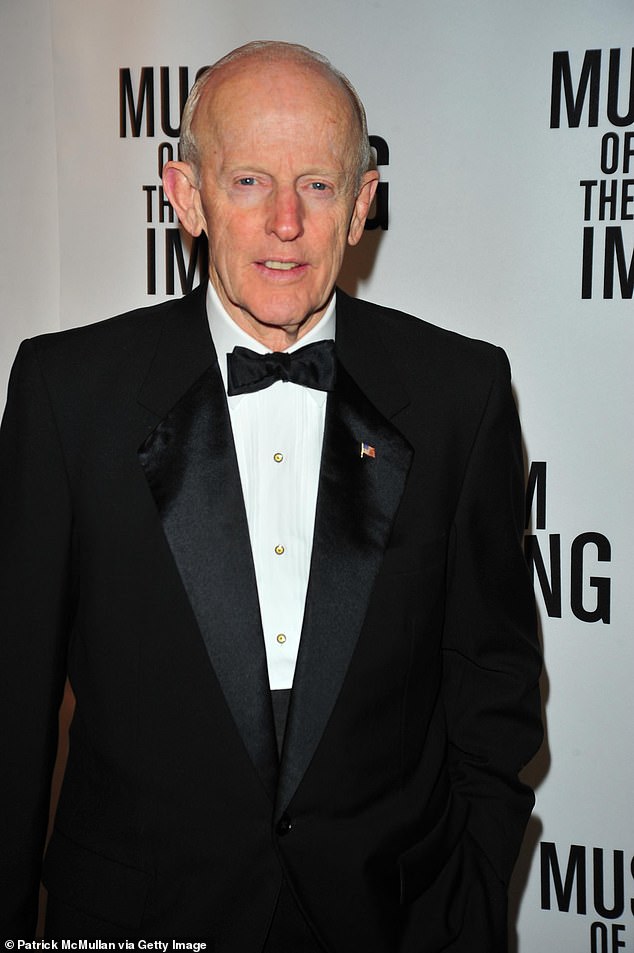 Billionaire Republican donor Stanley Hubbard (pictured on May 11, 2009 in New York) wrote his first check to Sinema in September and said he is considering also donating to Manchin 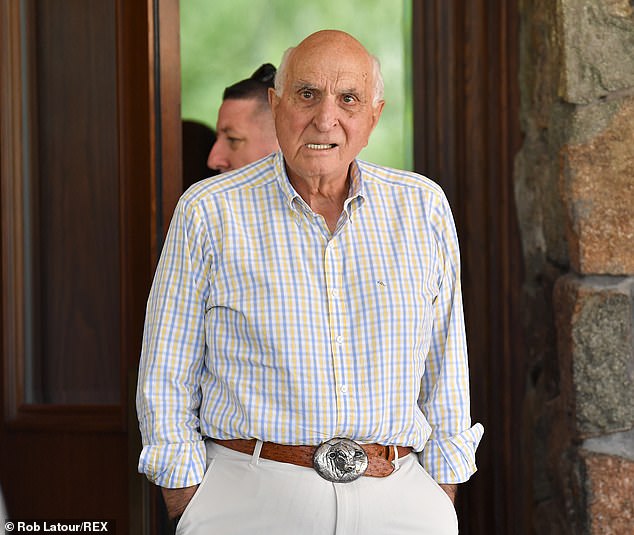 Earlier this month, Langone told CNBC that he would throw ‘one of the biggest fund-raisers I’ve ever had’ for the West Virginia senator.

‘My political contributions have always been in support of candidates who are willing to stand tall on principle, even when that means defying their own party or the press,’ he told the Times.

Both Manchin and Sinema, who represent Arizona in the Senate, have also received cash from right-leaning political action committees and donors linked to the finance and pharmaceutical industries, which are entities opposed to proposals included in the bills the two centrist senators are holding up.

Over the summer, Manchin traveled to an $18 million mansion in Dallas, Texas for a fundraiser with Republican and corporate donors. In September, Sinema stopped by the same home to raise money from the same sect of donors.

The duo have drawn criticism from their own party for reshaping the Biden agenda by opposing certain measures in his Build Back Better plan.

Sinema is seeing the backing due to her opposition to raising the personal and corporate income tax rates while Manchin has attracted right-leaning donors in his fight against the size of Biden’s social spending and welfare package.

It’s not unusual for donors to cross the political aisle. For example, Republican Representative Liz Cheney received a handful of contributions from Democrat donors this year after speaking out against her party embracing Donald Trump.

The influence from Manchin and Sinema has drastically thrown off Biden’s ability to sail his agenda through Congress.

Biden’s Build Back Better plan was originally proposed at $3.5 trillion but was whittled down to $1.75 trillion, the version of which passed the House on Friday. The plan was supposed to be paid for through tax-rate increases, which is a component of the plan that had to be rewritten due to Sinema’s opposition.

Langone, 86, told CNBC’s Squawkbox earlier this month: ‘You know my politics, but I don’t see leadership any place in this country.’

‘Thank God for Joe Manchin,’ he continued. ‘The guy’s got guts and courage.’

‘He’s a Democrat, I’m a Republican, I’m going to have one of the biggest fundraisers I’ve ever had for him,’ he said. ‘He’s special. He’s precious. He’s a great American.’

In the 2020 election cycle, Langone and his wife Elaine donated $545,000 to candidates and parties, $534,600 to Republicans and $10,600 to Democrats, according to the Center for Responsive Politics. Hit net worth is estimated to be $6.4 billion, according to Forbes.

Forbes reports that Langone has donated over $2.4 million to Republican causes since 2019. He did not donate to the former President Trump’s reelection campaign in 2020, though he has in the past expressed support for a number of his policies.

After the Jan. 6 Capitol riot, Langone said he felt ‘betrayed’ by Trump.

Manchin is not up for reelection until 2024. He has not announced if he’ll run for another term. 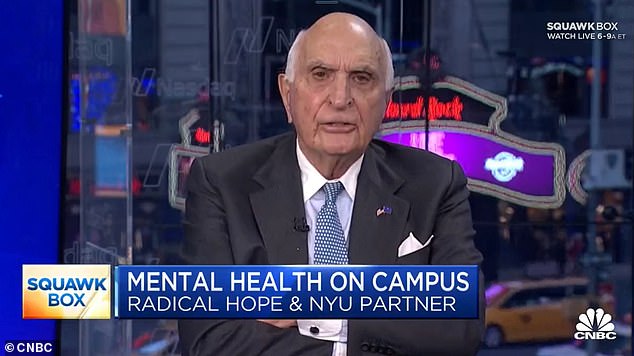 “I don’t see leadership any place in this country. Thank god for Joe Manchin. The guy gots guts and courage … I’m going to have one of the biggest fundraisers I’ve ever had for him. He’s special,” says Ken Langone on @Sen_JoeManchin. pic.twitter.com/HUkZHdI41a 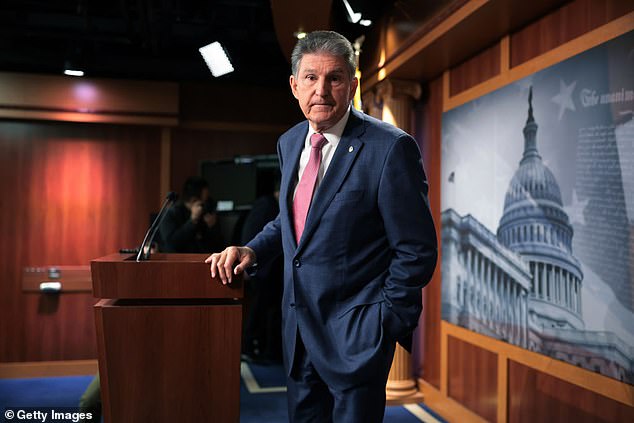 ‘Thank God for Joe Manchin,’ Langone said. ‘The guy’s got guts and courage’

Langone also issued a dire warning on inflation, hours before Manchin did the same.

‘Let me give you a warning, this inflation is a lot worse than people think. It is not transitory. The little people … they’re going to suffer.’

New figures released Wednesday showed a 6.2 percent jump in the Consumer Price Index in October compared to a year ago. Prices were up 0.9 percent from only one month ago.

Manchin said the new figures proved inflation was ‘getting worse’ and is not temporary, as the White House has previously insisted.

‘By all accounts, the threat posed by record inflation to the American people is not ‘transitory’ and is instead getting worse. From the grocery store to the gas pump, Americans know the inflation tax is real and DC can no longer ignore the economic pain Americans feel every day,’ Manchin said.

Manchin, along with Sen. Kyrsten Sinema, D-Ariz., was the last stalwart against the $3.5 spending bill, President Biden’s Build Back Better agenda. That bill has now been pared back to $1.75 trillion and many tax provisions have been cut out. Still, Manchin has not committed to voting for it, but reports say that Sinema has quietly signaled her approval.

The West Virginia Democrat has found himself something of a hero for the right, as rumors swirl over whether he’ll switch party affiliation.

He has killed any idea of a corporate tax above 25 percent, the proposed billionaire tax and a provision that would allow the IRS to snoop on bank accounts with over $600 in transactions.

His new statement about inflation follows prior warnings he made last week, and wasn’t lost on Senate Minority Leader Mitch McConnell, whose team out a statement pointing to Manchin’s comments, adding his own concerns about inflation.

Manchin said last week, when asked about the Build Back Better plan: ‘Nor will I support a package that risks hurting American families suffering from historic inflation.’ He added: ‘I, for one, also won’t support a multitrillion-dollar bill without greater clarity about why Congress chooses to ignore the serious effects inflation.’

‘Senator Manchin might be onto something,’ said McConnell aide Doug Andres.

McConnell, in comments to WKYX-Paducah radio in Kentucky, pointed to Manchin and Sinema as ‘resisting’ the package.

‘They could kill the whole thing, either one of them,’ he said.