A man has been charged with money laundering after Queensland Police allegedly found more than $4 million in the boot of his car in a ‘random intercept’.

When officers approached, they said the 28-year-old placed a large suitcase in the car boot. 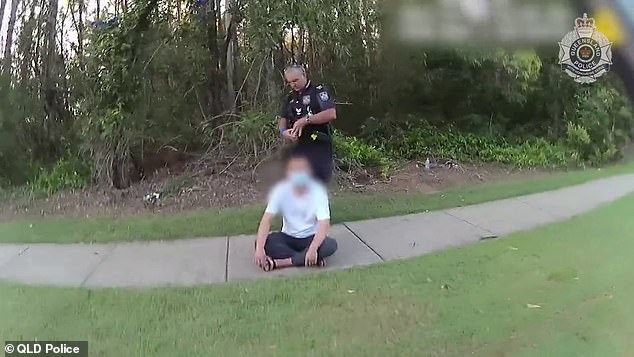 Queensland police officers arrested a 28-year-old man (pictured) last Saturday after allegedly discovering his car boot contained $4.1 million in cash and he had failed to comply with Queensland Covid restrictions

After the man became ‘nervous and elusive’ when questioned, officers searched his car and found about $4.1 million in cash.

The money was wrapped in vacuum-sealed bags inside two zip-tied suitcases.

Police footage of the incident has been released by the Queensland Police Department.

The footage shows the man acting suspiciously upon police approach as well as the officers’ discovery of the cash and the man’s subsequent arrest.

Police alleged the man had entered Queensland from NSW only two days prior to his arrest and additionally charged the man for failure to comply with Covid restrictions.

The man was remanded in custody on Monday and will next appear in the Brisbane Magistrates Court on December 6.