A student nurse has described how she was stalked by a neighbour who offered to pay her for sex and licked his windows when she left the house.

Eleanor Maddison, 23, ordered some medical books for her course in January this year, but was on a nursing placement when the package arrived at her house in Salford, Greater Manchester, so it was left with neighbour Jehad Khan, 46.

Perverted Khan then began messaging Ms Maddison, sending sexually explicit messages and pictures, declaring his love, and offering to pay her £200 for sex.

Ms Maddison told him to leave her alone, but Khan persisted, and eventually she threatened to tell the police.

She did not hear from him for two weeks and thought her ordeal was over, but in early February Khan sent Ms Maddison her own WhatsApp profile photo with a love heart on it, along with a message saying ‘F*** you b****’ and a photo of a penis.

Ms Maddison said she then spoke to police, who ‘were aware of Khan’, and they arrested him the same day.

Khan appeared before Tameside magistrates in October 2021 and was convicted of harassment and sending malicious communications. 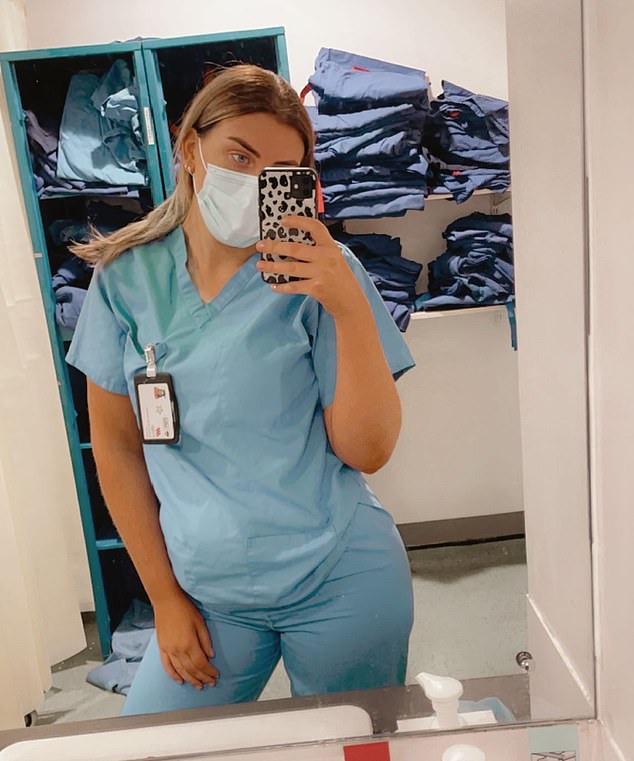 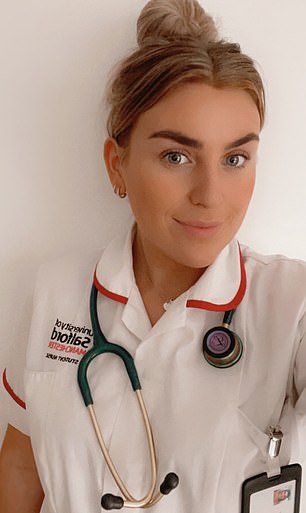 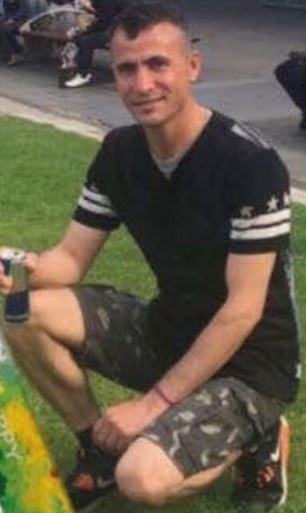 Eleanor Maddison, left, ordered some medical books for her course in January this year, but was on a nursing placement when the package arrived at her house in Salford, Greater Manchester, so it was left with neighbour Jehad Khan, right 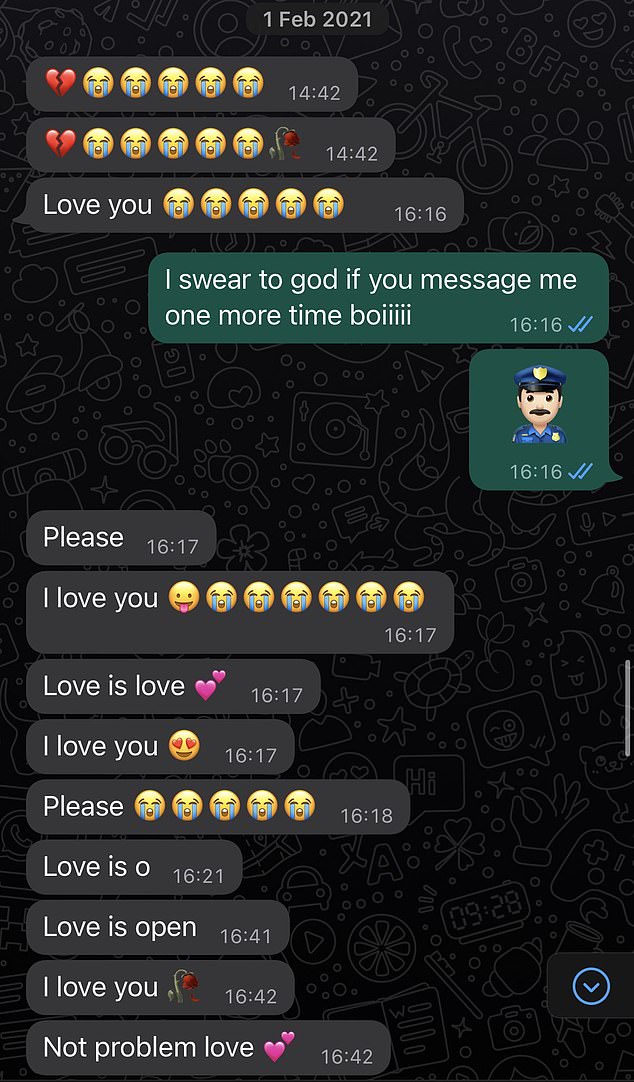 Perverted Khan then began messaging Ms Maddison, sending sexually explicit messages and pictures, declaring his love, and offering to pay her £200 for sex

He was handed a 12-month community order, a 12-month restraining order, and 20 days rehabilitation, along with 240 hours of unpaid work.

Ms Maddison was left too distressed to remain in her home and she moved to a block with round the clock security. She also changed her phone number.

Eleanor Maddison has started a petition to stop mobile phone numbers being printed on parcels following her ordeal.

She had been too distressed by the incident to stay in her home and had to move house and change her phone number.

In her petition calling for an end to displaying phone numbers on packages, which now has more than 400 signatures, she writes: ‘How many times have your parcels been delivered to neighbours? Probably a lot!

‘We do not know who is going to get hold of your personal details.

‘The general idea of my petition is to stop mobile numbers being put on parcels and to protect people from this happening again, I would appreciate anybody reading this to sign.

‘I do not want anybody else to have to go through what I did, this has affected my studying, mental health and I have spent a lot of money to move house and protect myself when it all could have been avoided.

‘I am aware not all neighbours are like him, but you just never know.’

She has now started a petition to stop mobile phone numbers being printed on parcels and to protect other people from a similar ordeal.

Ms Maddison said: ‘This could all have been avoided if my number hadn’t been on the parcel. I have now started a campaign to stop this happening to someone else.

‘(Khan) sent dozens and dozens of messages and they very quickly became inappropriate and sexual. If I hadn’t gone to the police and then moved house, I dread to think how this might have ended.’

Ms Maddison, a student nurse, moved into a student house with a pal in October 2020 in Salford.

She says: ‘We loved the house and the street seemed OK. I settled in very well.’

But in January 2021 Eleanor ordered some medical books for her course. She was on a nursing placement when the delivery arrived, so it was left with a neighbour, Jehad Khan.

Ms Maddison said: ‘Jehad Khan called me to say he had my parcel and I arranged to collect it that evening. I’d never met him before and I thanked him and that was that. I realised when I checked the parcel that my mobile number was on the label.’

Ms Maddison said: ‘I ignored the message, but he continued sending love heart emojis and asked if I would go out with him. I told him I had a boyfriend, to try to put him off, but instead he offered me £100 to go on a date with him.

‘He was a middle-aged man, in his forties, and I thought he was inappropriate.

‘I wasn’t too concerned at first but then he said he was in love with me and sent me a photo of a couple kissing in their underwear. I replied asking him to leave me alone, but he sent me an image of a man giving a woman oral sex. It really creeped me out.

‘He was sending maybe fifteen messages at once. His house was opposite mine and when I left my home, I’d see him staring at me.

‘On one occasion, he was in his bedroom, and he knocked on the window to get my attention and then began licking his window as he stared at me. It really knocked me sick.

‘Then he messaged offering me £200 for sex and said I was ”hot” and ”sexy”. I asked him so many times to leave me alone and to stop harassing me. 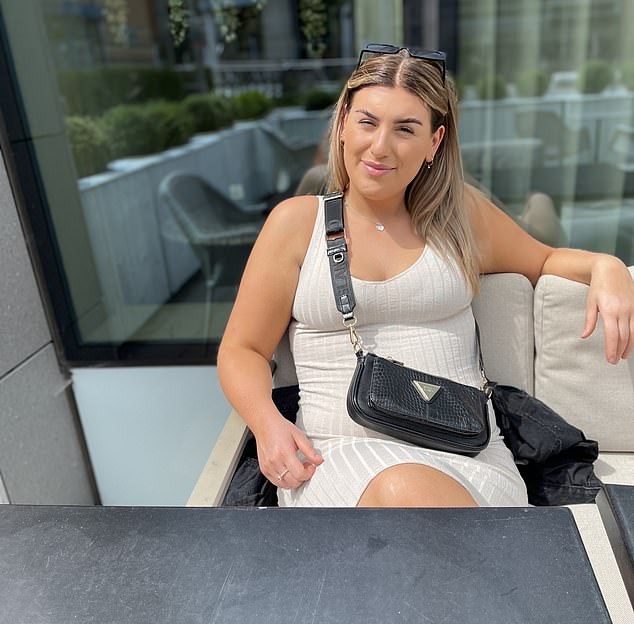 Ms Maddison, a student nurse, moved into a student house with a friend in October 2020

‘My housemate and me worked alternate shifts so I was often in the house on my own and I didn’t feel safe. I kept the blinds closed because I didn’t want him to see me. I didn’t feel comfortable in my own home.’

Ms Maddison confided in family and friends who urged her to contact police.

She says: ‘I sent him a formal message saying that if he ever messaged me again, I would call the police. For nearly two weeks, I didn’t hear from him, and I really thought my ordeal was over.

‘Next, there was a photo of a penis, which turned my stomach.

‘I spoke to the police who said they were aware of Khan and they arrested him that same day.’

Ms Maddison added: ‘Before I moved out of the house he stood and stared at me at the window. He didn’t seem to have taken the court case seriously at all.’

She has now started a petition to remove phone numbers from parcels.

Ms Maddison said: ‘I do not want anybody else to have to go through what I did, this has affected my studying and my mental health and my family and friends have been worried sick.

‘I have spent a lot of money moving house and protecting myself when all of this could have been avoided.

‘Taking numbers off parcels is a positive step towards keeping women safe.’