Transportation Pete Buttigieg defended his own paternity leave Monday as he pitched the new $1.2 trillion infrastructure bill headed to President Biden’s desk as he said the White House would ‘continue to fight’ for family leave legislation.

His defense of family leave came even as a group of Democratic moderates pledged to back a White House framework agreement ‘in its current form other than technical changes’ – meaning without family leave provisions that are a priority for progressive lawmakers.

‘The president put forward a framework that he’s confident can pass the House and the Senate,’ Buttigieg told reporters at the White House Monday.

‘I think it’s also no secret how I feel about family leave and how the president does, which is why … he campaigned on it and we will continue to fight for it.

Then he defended providing time for leave for the birth of a child or to care for a family member – after he took time after he and husband Chasten adopted twins. 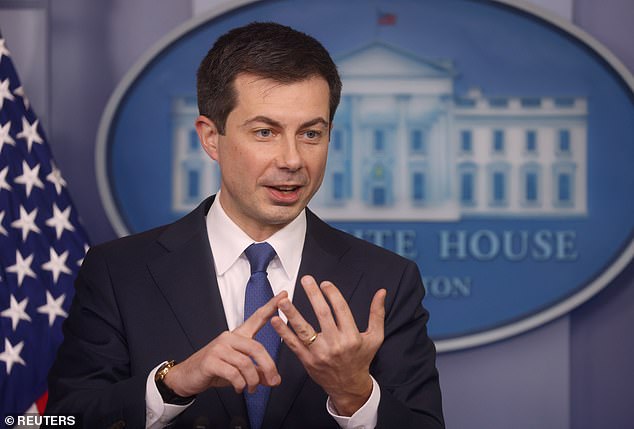 Secretary of Transportation Pete Buttigieg speaks to the news media during a press briefing at the White House in Washington, U.S., November 8, 2021. He defended his own paternity leave, and said the White House would fight to extend it

Then, Buttigieg said, speaking as a new parent, about all that would come from a negotiated framework in other areas – he mentioned pre-K, affordable child care, and the extended child tax credit.

Buttigieg also cheered House passage of legislation he said would now become ‘law of the land.’ He said he was ‘thankful to everyone who’s played a role.’

But the White House did not say Biden would not sign legislation that is such a priority immediately.

Instead, indications are that Biden will wait for lawmakers to return to Washington from a week-long break to stage a pep rally signing ceremony for what the administration considers a major legislative win.

Asked about the delay, White House press secretary Karine Jen-Pierre said Biden ‘wants to make sure the Congress members who worked very, very hard on this’ got a chance to participate.

‘When they come back they’ll figure out a time to sign it,’ she said.

Buttigieg also spoke about moderate Democrats who are demanding to see a budget score for the big Build Back Better bill before it hits the floor, likely the week of Nov. 15.

Five centrists, including Reps. Josh Gottheimer (D-N.J.) and Stephanie Murphy (D-Fla.), helped negotiate a letter where they indicated they would back the agreement if it stays essentially the same and the score comes in as anticipated.