A mother has pleaded guilty to horrifically abusing her five adopted children, beating and strangling them, depriving them of food and forcing them to sleep in a frigid basement without any bedding.

Stephanie Duncan, 43, of Annville Township, Pennsylvania, faces up to 288 years in prison after pleading guilty to the abuse of the children, aged between six and 15.

Duncan’s husband Robert pleaded guilty to having failed to intervene and was sentenced last week to between six and 30 years in prison.

The Duncans punched and strangled all four of the boys, while they smacked the youngest, a six-year-old girl, in the mouth.

The siblings were subjected to the terrifying beatings for failing to complete chores on time, and even for ‘stealing’ water from the sink when they got thirsty.

The three eldest boys were forced to sleep downstairs in the basement with just a space heater for warmth and a mattress which lay directly on the concrete floor.

The abuse was uncovered when the couple’s 11-year-old son, named only as L.D., was rushed to hospital with hypothermia. Court documents say his blood pressure was unusually low, and the boy had bruises on his neck, shoulders, back, abdomen, hip and genitals. 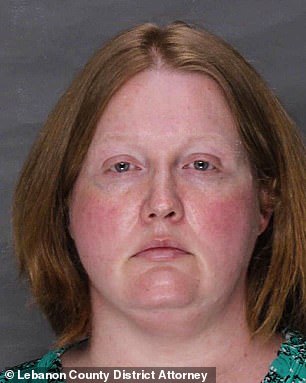 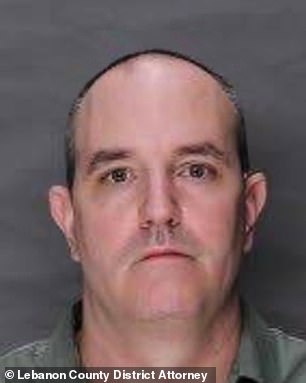 Appearing via video link before Lebanon County Judge Bradford H. Charles on Wednesday, Stephanie Duncan entered an open guilty plea, which means there is no agreement regarding her sentence.

Her sentencing is scheduled for December 22.

Robert Duncan was sentenced on October 13 after he apologised for his role in the abuse.

‘The children will never recover psychologically,’ Charles said, according to the Lebanon Daily News. ‘There are times when an apology is trite, and this is one of those times. It takes a sociopathic sadist to torture children. It takes someone who has no regard for humanity to sit back and let it happen.’

In a statement regarding the couple being charged, the Lebanon County District Attorney’s office said in February that they were charging the Annville couple over ‘the prolonged assault and abuse of their five adopted children’.

The statement said that they were charging ‘Stephanie A. Duncan and Robert Duncan with multiple counts of aggravated assault, simple assault, tampering with or fabricating physical evidence, endangering the welfare of a child, and conspiring with one another to commit these heinous acts.’

The statement added: ‘On January 12, 2021, the Defendants’ eleven-year-old son, L.D., was rushed to the Hershey Medical Center. The child required emergent medical care; L.D. was unresponsive and hypothermic.

‘His blood pressure presented as abnormally low. Test results showed his blood had low potassium levels, an electrolyte disturbance, and an excessive amount of sodium.

‘An examination of L.D.’s body revealed bruises on his neck, shoulders, back, abdomen, hip, and genitals. The medical staff determined the location of the child’s bruises were not consistent with accidental injury.

‘Through their course of care, medical professionals determined L.D. did not have a pre-existing medical condition to which they could attribute his injuries. The child’s significant hypothermia could only be caused by prolonged exposure to extreme cold.

‘Hospital staff spoke with L.D.’s mother, Stephanie Duncan. S. Duncan told staff her child went to bed the night before in a normal fashion with a headache. She had no explanation for his weakened state or issues within his blood.

‘The Lebanon County Detective Bureau commenced an investigation. Detectives responded to the Duncan residence on the evening of L.D.’s hospitalization.. They learned the Defendants adopted L.D. as well as four other children who resided in the family’s home. The children ranged in age from six to fifteen years old.

‘The oldest three children had separate bedrooms in the family’s basement. L.D.’s room contained a bare, concrete floor. The room had a mattress with bedding; the mattress rested directly on top of the concrete floor.

‘A space heater ran in the middle of the room, and directly faced the mattress. The child’s bedroom contained nothing on the walls and very minimal personal items. Investigators noted the room smelled strongly of bleach. The Defendants placed a video camera in the child’s ceiling; S. Duncan told law enforcement the cameras were live-stream and used during daytime hours only.’

The statement also said that the authority started an emergency petition to remove the children from the home, adding that ‘both defendants inflicted punches and strangulation on all four male children; the Defendants smacked their youngest child, a six-year-old girl, in the mouth.

‘Each child provided statements during his or her interview which depicted graphic punishments, restrictions, and the denial of basic, necessary sustenance from both S. Duncan and R. Duncan. Each child provided statements which also illustrated the disturbing experience of watching S. Duncan and R. Duncan physically attack his or her siblings. Even minor misbehaviors, such as taking too long to consume water or complete a chore, resulted in horrific, violent abuse.’

The statement said that the child named as L.D. was at one point choked by the male defendant for ‘stealing water from the sink’ because he was thirsty and that had not received medical when he was taken to hospital, he would have died.

The statement added that ‘L.D. suffered near daily torment at the hands of the defendants.’ It also said that ‘Dr. Kathryn Crowell of the HMC Child Protection Team ultimately opined the little boy’s physical condition constituted ‘serious bodily injury’ as defined by law.’

The District Attorney’s office slammed the parents, saying that ‘the defendants had the duty to protect, care for, and unconditionally love their children.

‘They violated every aspect of their duties and instead created a household of unspeakable fear, violence, torment, and abuse.’

‘Crimes of child abuse are the worst, both for the victims and the investigators. As your DA, I am so proud of the efforts our law enforcement took to protect these children and hold the offenders accountable. We spent hours with the kids, to get to know them, to understand their daily lives, and to let them have input as to the outcomes of the cases.

‘Victim empowerment – giving control back to these children- is such a huge part of the healing process. Every day we work to protect those victims who cannot help themselves. To bring horrific child abuse to light, to make kids safe in their home, is a true calling. I thank all of the investigators and, most of all the children themselves, for the work done in this case.’