A mother has revealed how a bike helmet saved her two-year-old son from almost certain death after he was knocked off his bike by a car – his head pinned under the tyre.

The mother was walking with her 15-month-old daughter Emily and two-year-old son Jack through Montrose, in Melbourne‘s east, in October 2020.

She was pushing her daughter in the pram while her son was riding ahead when the trio stopped for a couple of babycinos at a cafe.

‘We came around a corner towards the cafe, approaching the exit driveway, and Jack took off a few metres ahead.

‘As he was approaching the driveway, I shouted out, “remember, we stop here and walk our bike in the carpark”.’

As soon as the mother had spoken the words a car appeared from the driveway and struck Jack. 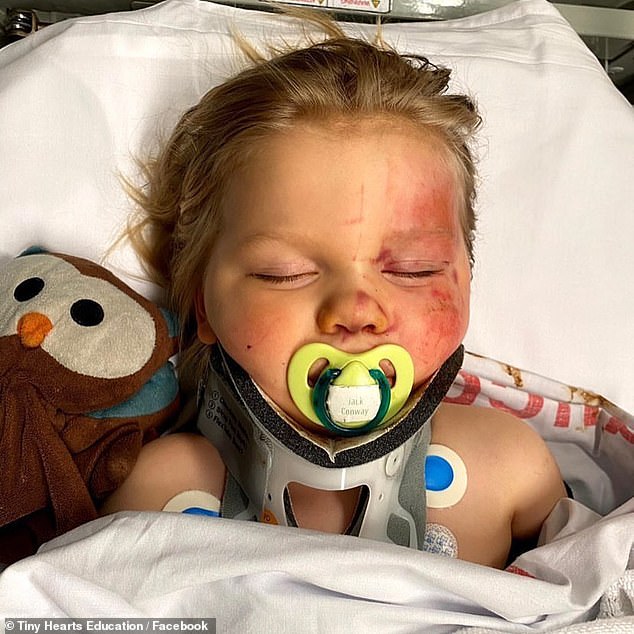 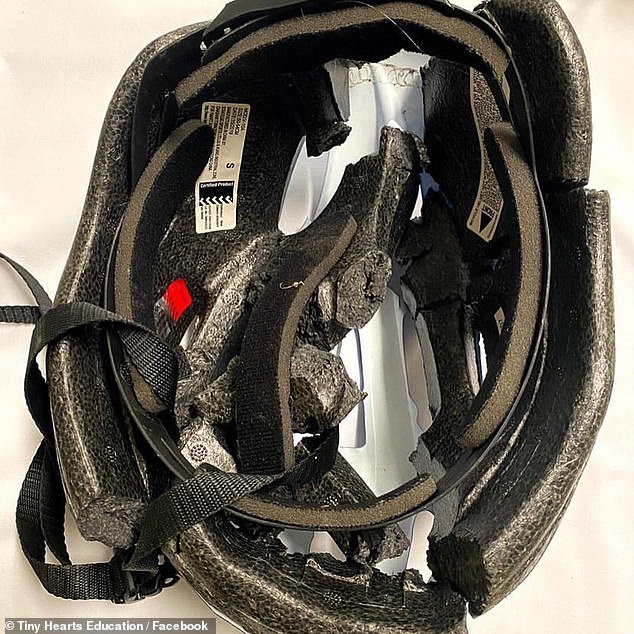 The mother had been walking with her 15-month-old daughter Emily and two-year-old son Jack through Montrose, in Melbourne’s east, in October 2020

‘I watched a red car hit my baby boy off his bike, and he disappeared under it,’ the mother wrote.

I literally watched the tyre drive over my baby’s head

‘I have never screamed so loud in my life.’

The horrified mother rushed over to her son and found him wedged under one of the tyres. His head was on one side, his body on the other.

Bystanders rushed in to help and they told the elderly gentleman driver to slowly reverse the car.

In the panic and confusion, the driver accidentally accelerated forward.

‘I literally watched the tyre drive over my baby’s head,’ the mother said.

‘I heard the loudest crack as his helmet caved under the car, and at that exact moment, I thought my boy was going to die.’

The mother cradled her child into her arms as she waited for the ambulance to arrive.

‘I tipped water onto his face, and I just kept telling him to stay with me; he was moving in and out of consciousness.’

A bystander called the son’s father Chris who came to pick up Emily while the mother rode in the ambulance with her son to hospital. 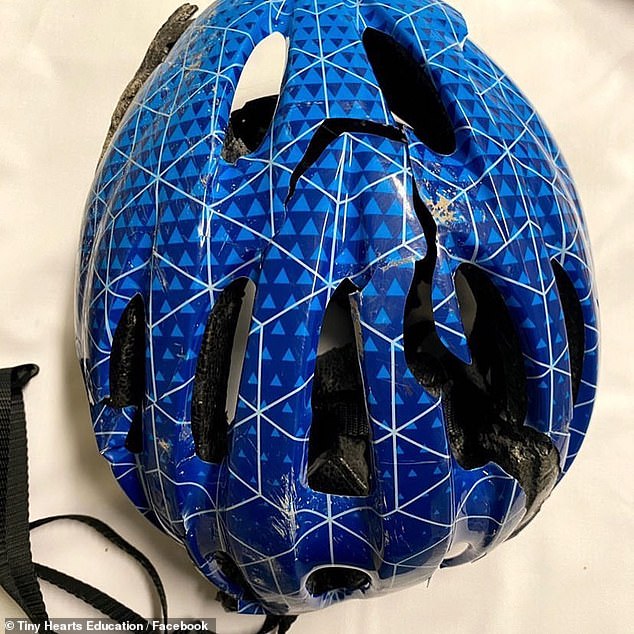 Doctors revealed the bike helmet spared Jack any permanent damage from the horrific accident. Above, the massive crack left in it

Preliminary tests showed Jack did not suffer any permanent damage to his body but the mother braced herself for the worst as he went in for a CT scan of the head.

‘I was just holding it together,’ she wrote. ‘I stayed with him the whole time except I had to wait outside the room when he had his CT scan: it was horrible.

‘Finally Chris arrived during that time and I finally broke down! We stood there together wondering what the outcome of our sweet boy would be.

‘The doctor came out, he told us, “I have not seen the final report, however I can tell you there is no bleeding or any sign of injury to his brain”.’

Jack managed to escape the accident with only two fractures on the left side of his face.