Medina Spirit, the disputed Kentucky Derby winner at the center of horse racing’s doping scandal, has died from an apparent heart attack following a training session in California, according to multiple reports.

The Bob Baffert-trained colt had just completed a five-furlong workout at Santa Anita Park, according to Thoroughbred Daily News, which reported the news. California Horse Racing Board equine medical director Jeff Blea and Dionne Benson also confirmed the report to Bloodhorse.com. The CHRB did not immediately respond to DailyMail.com’s request for confirmation.

‘I just heard. He had a heart attack,’ owner Amr Zedan told TDN. ‘It was quick and he didn’t suffer. It’s unfortunate. In a moment like this there is not much that we can do. All I can say is that he gave us the ride of our lives and brought everyone together. We are mourning this loss, Bob [Baffert], myself, our team and Johnny [Velazquez], as well. We are all very sad.’

The cause of the heart attack was not immediately known.

‘We don’t know the cause and sometimes even after the necropsy, we don’t know,’ Benson told BloodHorse.

Medina Spirit tested positive for betamethasone, a banned substance, in May and was banned from running in the Belmont Stakes, the third and final leg of the triple crown. The Kentucky Horse Racing Commission has not yet issued a final decision on the matter.

Medina Spirit, the disputed Kentucky Derby winner at the center of horse racing’s doping scandal, has died from an apparent heart attack following a training session in California 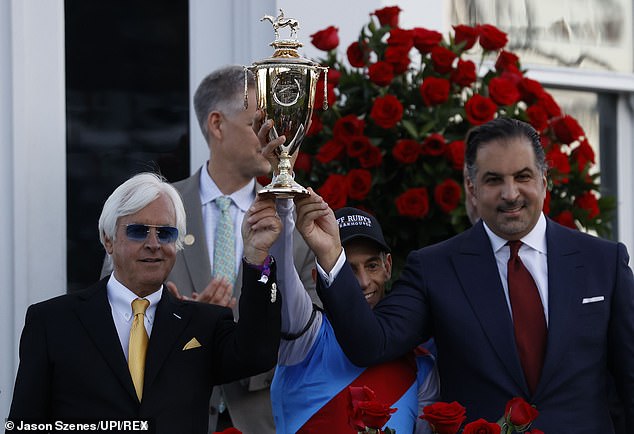 Trainer Bob Baffert (L) Jockey John Velazquez (C) and Horse Owner Amr Zedan hold up the winners trophy after the 147th running of the Kentucky Derby at Churchill Downs on May 1, 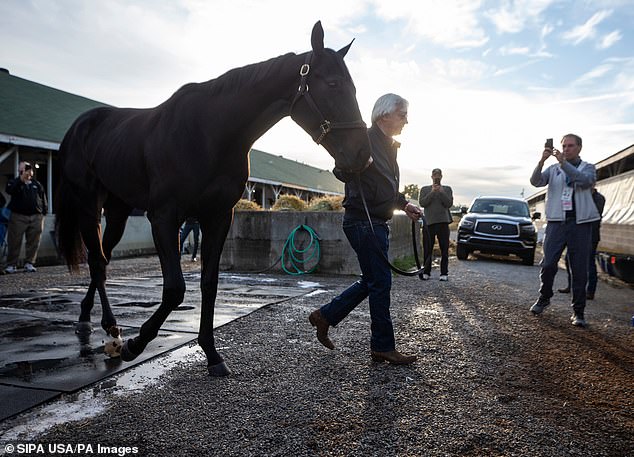 Clark Brewster, an attorney for Zedan Racing, said the testing of the sample was completed by the New York Racing Laboratory and ‘scientifically confirmed’ Medina Spirit was not injected with betamethasone. A split sample test for the three-year-old confirmed that the presence of betamethasone was from a topical ointment, Brewster said.

‘The Kentucky Racing Commission has steadfastly enacted rules relating to corticosteroid joint injection and have drawn a bright line rule that no injections are permitted within 14 days of a race,’ read the statement.

‘Now there is zero doubt that the 14-day rule some thought might have been violated by the earlier, less specific testing is revealed as premature judgment. That groundless accusation is without scientific merit.’ 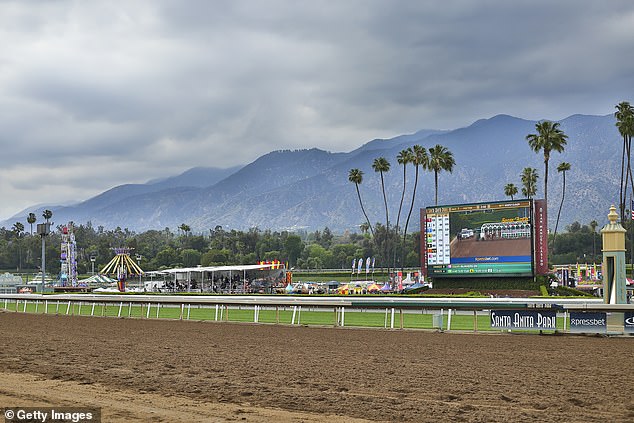 A general view of atmosphere at Santa Anita Gold Cup Race Day at Santa Anita Race Track on May 26, 2018 in Arcadia, California. Medina Spirit suffered a heart attack at the track Monday

He has since claimed to be the victim of ‘cancel culture.’

‘With all the noise going out, we live in a different world now,’ Baffert told Fox News in May. ‘This America is different. It was like a cancel culture kind of a thing.’

He said a prolonged suspension from racing horses in New York or stabling them at Belmont Park, Aqueduct Racetrack and Saratoga Race Course could cause him to lose horses worth tens of millions of dollars to other trainers.

‘This will effectively put me out of business in the State of New York,’ Baffert said in a filing in the federal court in Brooklyn.

In July, a federal judge nullified the NYRA suspension, saying the organization failed to provide him a post-suspension hearing.

The ruling was a significant win for the trainer, one of the most successful and recognizable figures in the sport, and allowed for him to compete in New York state races again.