Not less than 120 retired military generals and admirals have signed an open letter questioning Joe Biden’s physical and mental health.

The letter from the group which calls itself ‘Flag Officers 4 America’ and consists of retired military officers including generals and admirals calls into question Biden’s capacity to serve as president.

It also challenges the election of the country, which they claimed a “Constitutional Republic is lost” without “fair and honest elections that accurately reflect the ‘will of the people’.”

The letter talks about former US President Donald Trump’s claims of widespread election fraud and comes a day after Rep. Liz Cheney was voted out of the Republican party leadership for criticisms of Trump for still peddling claims of electoral fraud.

According to the Letter from Retired Generals and Admirals:

‘Without fair and honest elections that accurately reflect the ‘will of the people’ our Constitutional Republic is lost,’

‘The FBI and Supreme Court must act swiftly when election irregularities are surfaced and not ignore them as was done in 2020,’ they wrote.

The letter, called an ‘Open Letter from Retired Generals and Admirals,’ was first reported by Politico.

The letter buttresses Trump’s claims that absentee ballots are not secure.

‘Today, many are calling such commonsense [voter ID] controls “racist” in an attempt to avoid having fair and honest elections. Using racial terms to suppress proof of eligibility is itself a tyrannical intimidation tactic,’ they write.

The retired officers raise doubts about Biden’s mental capacity – and reference Speaker Nancy Pelosi’s move to get assurances about the nuclear codes in the days after the January 6 MAGA riot.

‘The mental and physical condition of the Commander in Chief cannot be ignored. He must be able to quickly make accurate national security decisions involving life and limb anywhere, day or night,’ they write.

‘Recent Democrat leadership’s inquiries about nuclear code procedures sends a dangerous national security signal to nuclear armed adversaries, raising the question about who is in charge. We must always have an unquestionable chain of command.’

‘The group pledged to support and defend the Constitution of the US against all enemies, foreign and domestic.’

The signatories of the letter attached their names to the letter. Among them was Maj. Gen. Joe Arbuckle, who served in Vietnam and later commanded the US Army Industrial Operations Command (IOC) at Rock Island, Illinois.

Other signers of the anti-Biden letter included include Vice Adm. John Poindexter, who was convicted in the Iran-Contra Affair.

Also signing on was Army Brig. Gen. Don Bolduc, who lost the Republican primary in 2020 to challenge Democratic Sen. Jeanne Shaheen, and is planning another Senate run.

‘Arbuckle, who organized the effort, told Politico: ‘Retired generals and admirals normally do not engage in political actions, but the situation facing our nation today is dire.’

He continued: ‘We are facing threats greater than at any other time since our country was founded. To remain silent would be a dereliction of duty.’

“Under Biden, the world is getting more violent and more unstable because Biden’s weakness and lack of support for Israel is leading to new attacks on our allies. 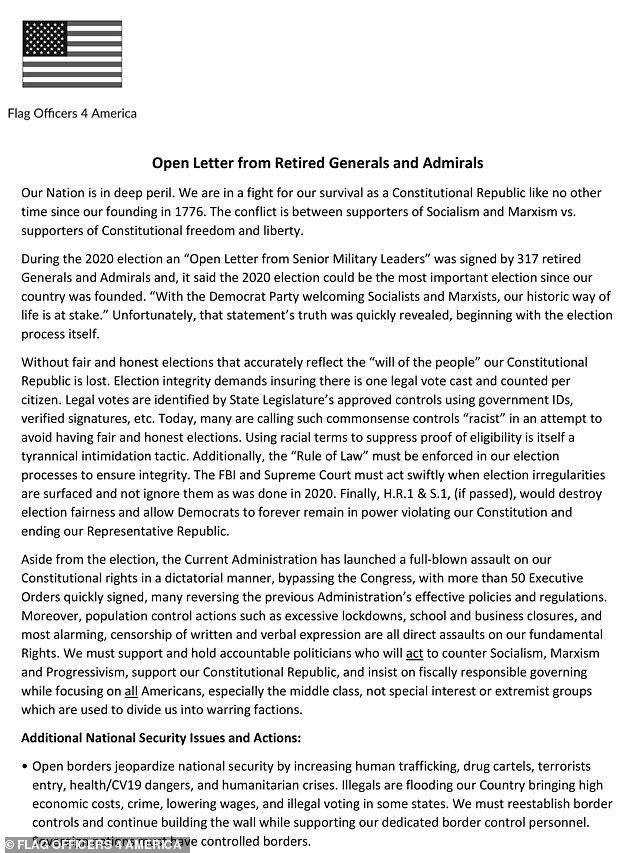 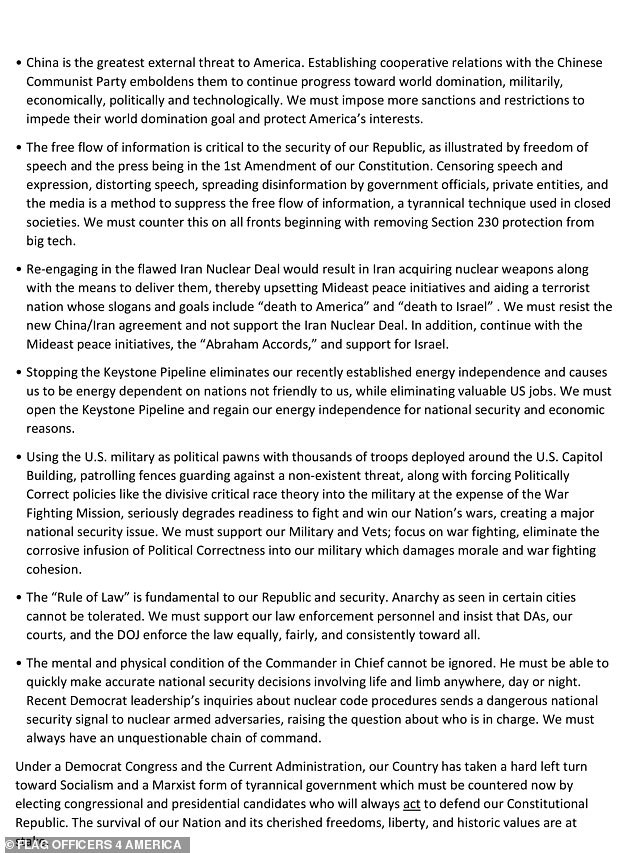