A young author who lost her left eye and underwent gruelling brain surgery after being diagnosed with melanoma has revealed how a trip to South Africa saved her life after Australian doctors failed to correctly diagnose her condition.

At the age of 21, adventurous Jessica Van Zeil felt invincible, but her world was turned upside down after being diagnosed with melanoma in 2015.

For as long as she can remember, the now 28-year-old from Melbourne told Daily Mail Australia she had a small red dot in her left eye that local doctors dismissed as a ‘burst blood vessel’ that was ‘nothing to worry about’.

But the dot was the only symptom that led Jess to be eventually diagnosed  with conjunctival ocular melanoma which later spread to her brain.

To this day doctors are unsure what caused the rare cancer as Jess always wore sunglasses and hats while outdoors. 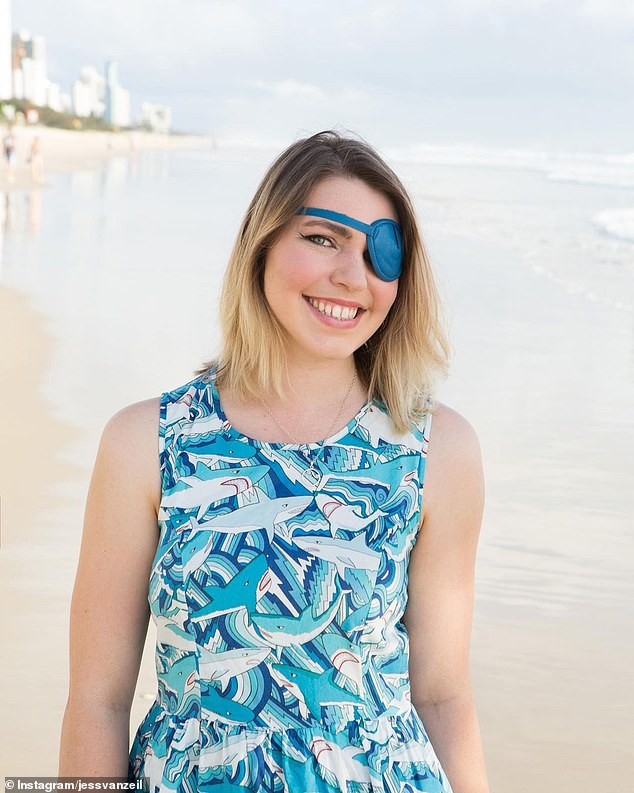 At the age of 21, adventurous Jessica Van Zeil (pictured) felt invincible, but her world was turned upside down after being diagnosed with conjunctival ocular melanoma in 2015 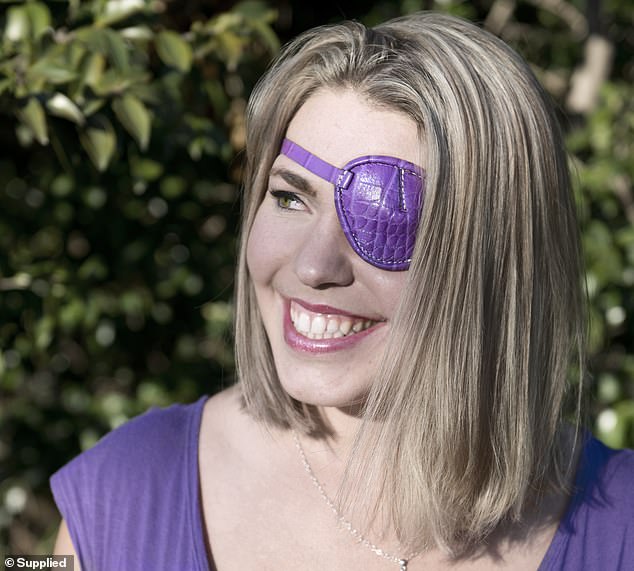 In January 2015 she had two surgeries in South Africa to remove the cancer in the eye, then a month later made her way back to Australia for further treatment

Prior to being diagnosed in January 2015 while in South Africa, Australian doctors conducted a biopsy on Jess’s eye and the results were benign.

‘I thought I was in the clear and the doctors weren’t too concerned,’ Jess said.

‘I didn’t have the time, energy or the private health insurance to deal with more concerns about my eye, so I decided to leave it for a few months,’ she said. 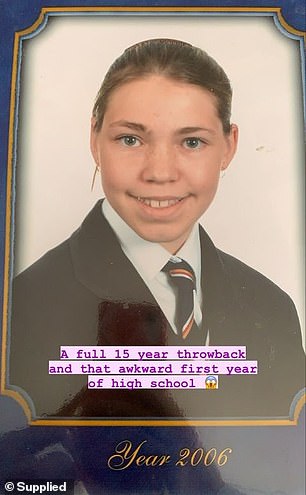 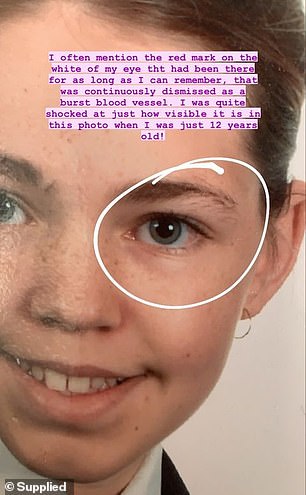 Jess flew to South Africa for an eight-week trip and was later diagnosed while there after she became increasingly concerned about her eye.

‘Being 21 I felt invincible, but an oncologist in Africa made me realise the seriousness of melanoma,’ she said.

‘I was in a lucky percentage to have a chance at survival.’

She had two surgeries to remove the cancer in her eye, then a month later she made her way back to Australia for further treatment.

Rare melanomas can occur inside the eye (ocular melanoma) or in parts of the skin or body that have never been exposed to the sun such as the palms of the hands, the soles of the feet or under the nails

Melanoma is projected to be the third most common cancer diagnosed in Australia in 2020, which along with New Zealand has the world’s highest incidence rate for melanoma

Melanoma is more commonly diagnosed in men than women. The risk of being diagnosed with melanoma by age 85 is 1 in 13 for men compared to 1 in 21 for women 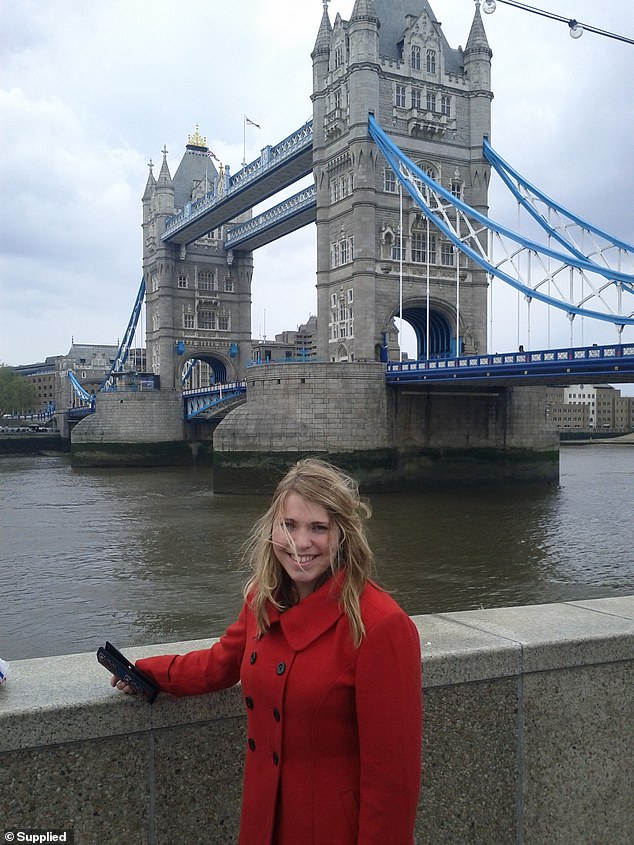 ‘For six months we watched and waited for changes, and then more dark black spots appeared on my eye and a lump the size of a pea grew on my bottom eyelid that was progressively getting bigger,’ she said.

The dots and lump were a sign the cancer had returned more aggressively than anticipated, leaving Jess shocked and confused.

The cancer was considered to be a ‘cutaneous melanoma’ as it had moved from the eye to the eyelid and muscle.

‘I knew I would lose my eye, but I just assumed I would have a glass replacement instead so I wouldn’t look “different”,’ she said.

‘But my dad later called the doctor who said my eye would be stitched shut after the surgery, which I was completely shocked to hear.

‘I remember thinking “I don’t want to stand out” and I wanted to live a “normal life”, so I didn’t want to go through with it at first.’

Jess researched potential alternative treatments herself which she later discussed with her doctor who turned down the options.

‘The doctor had answers and reasons for saying no – and eventually told me if I didn’t have the life-changing surgery suggested, I wouldn’t be here in five years,’ Jess said. 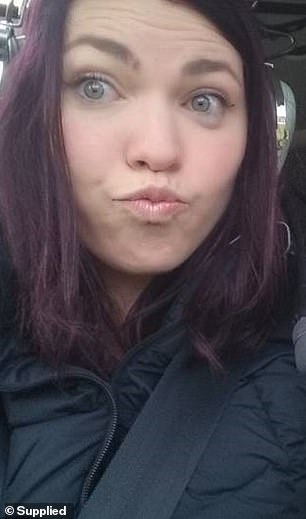 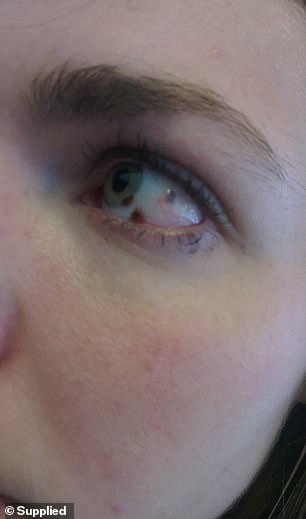 ‘We watched and waited for changes for six months and nothing changed, but then more dark black spots appeared on my eye and a lump the size of a pea grew on my bottom eyelid that was progressively getting bigger,’ she said (lump under eye pictured left)

‘That night I didn’t sleep and just lay staring at the wall wondering what life looked like beyond all this for me,’ she said.

However after 24 hours, Jess changed her perspective, accepted the fate of having the surgery and started to look up quirky eye patches to wear.

‘I thought I could let this ruin my life or I could be courageous and embrace it,’ she said. 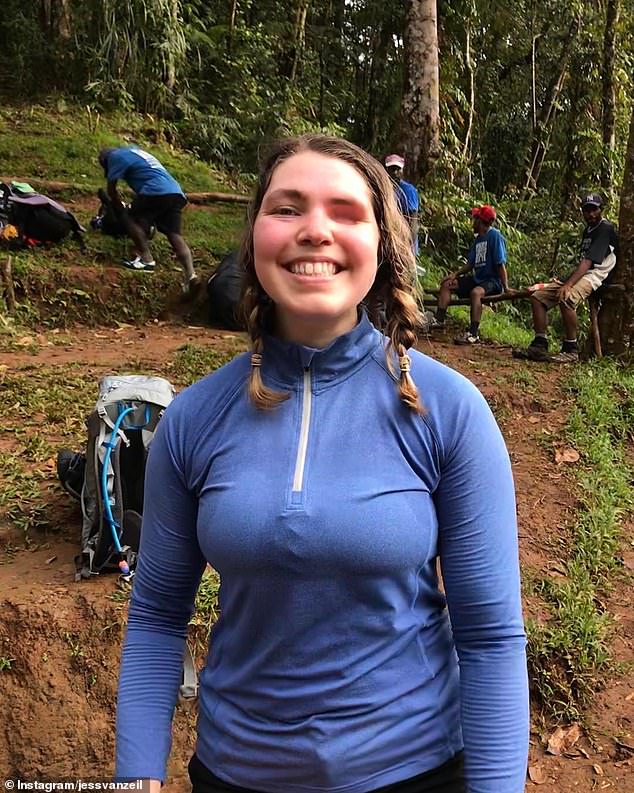 On October 9, 2015 Jess had surgery to remove her left eye and after six months to her surprised life resumed ‘as normal’

On October 9, 2015, the then 22-year-old Jess had surgery to remove her left eye then, to her surprise, life resumed ‘as normal’.

‘After taking the bandages off I expected to see someone foreign staring back at me, but I saw my bright familiar smile, my freckled cheeks, my button nose, my on-point eyebrows,’ she said.

‘The only difference was there was one eye staring back not two.’ 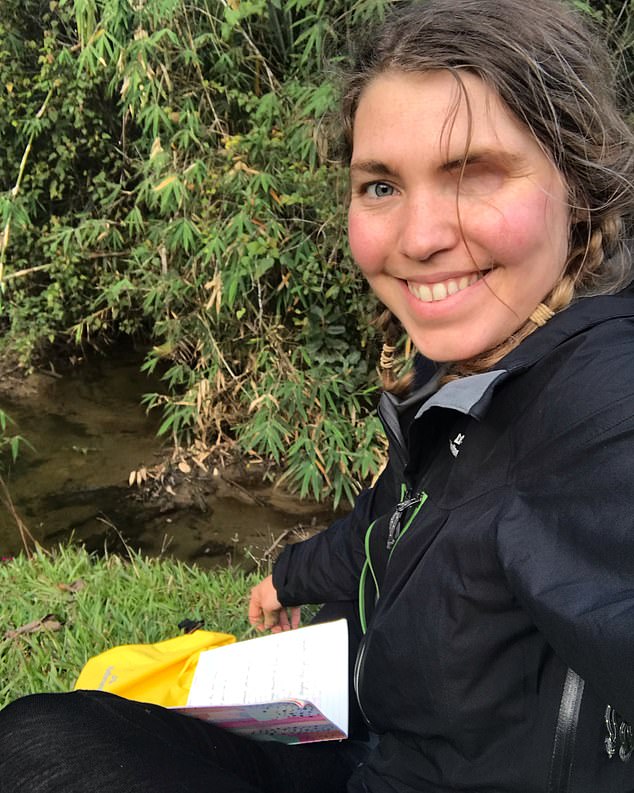 ‘The only difference was there was one eye staring back not two,’ she said

Eleven months later, Jess was living her life as she normally would and started wearing the eye patch in stylish ways.

However one morning when she went to have a shower before work, her toes started twitching and she had a seizure on the bathroom floor.

‘I thought I was having a heart attack or a stroke and thankfully my who mum was working from home called the ambulance,’ she said.

After being taken to the hospital, a CT and MRI scan detected ‘brain abnormalities’, which was later determined to be six to eight tumours.

‘The doctor told me and my mum the melanoma had returned and I was diagnosed with stage 4 melanoma metastases on the brain,’ Jess said.

‘My mum burst into tears thinking I had a death sentence, but I didn’t quite grasp the situation and asked “what’s next from here?”‘ 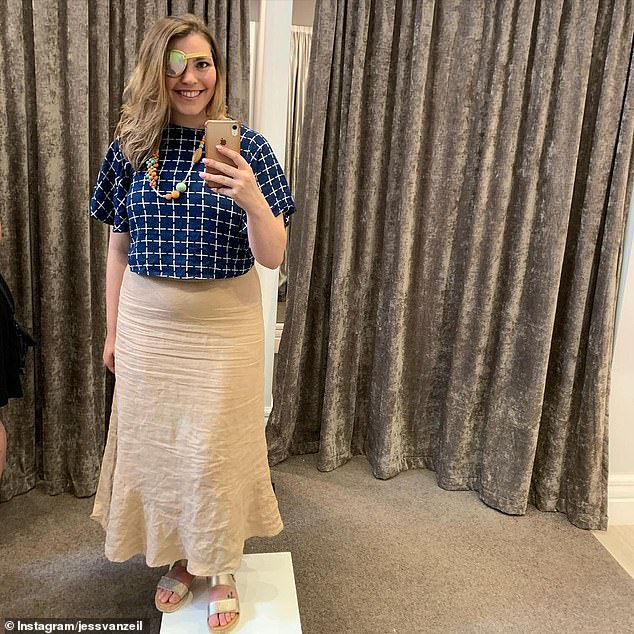 One morning when she went to have a shower before work, Jess’s toes started twitching and she had a seizure on the bathroom floor. After being taken to the hospital, a CT and MRI scan detected ‘brain abnormalities’, which was later determined to be six to eight tumours 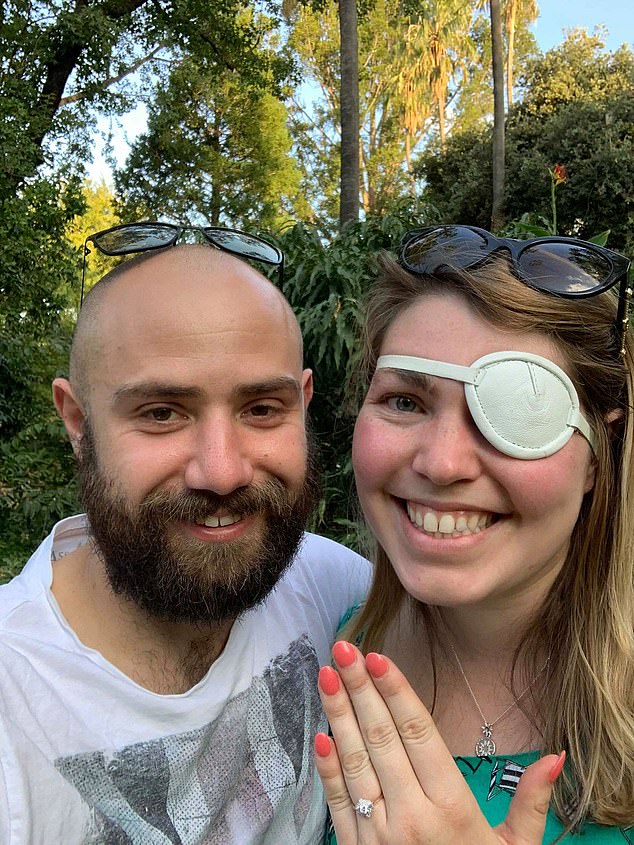 ‘The doctor told me and my mum the melanoma had returned on the brain that caused the seizure and I needed to stay in hospital for 24 hours,’ Jess said 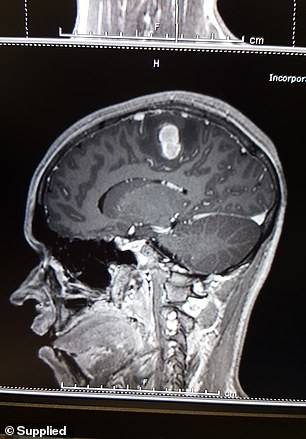 The following month Jess brain surgery to remove the one tumour that was the ‘safest’ to extract. She then had other treatments to get rid of the remaining tumours

The following month she had brain surgery to remove the one tumour that was the ‘safest’ to extract.

‘There was a chance I could become completely paralysed on the right side from the surgery,’ Jess said.

‘After the surgery I needed to learn how to walk and run again.’

‘This treatment is the only reason I am here alive and living my beautiful life. If it wasn’t for this treatment I would have been given six to 16 weeks to live,’ she said.

With help from the community, Jess and her family were able to raise over $100,000 to cover the costs of the treatments.

This week, six years on after the initial eye diagnosis, Jess has had her final PET scan and was given the all clear.

She is now in remission, but is still under surveillance.

In 2019 Jess recalled her experience and released a book ‘Eye Won’ to share her journey with others.

WHAT ARE THE COMMON SYMPTOMS OF MELANOMA?

Often melanoma has no symptoms, however, the first sign is generally a change in an existing mole or the appearance of a new spot. These changes can include:

– Colour – a mole may change in colour, have different colour shades or become blotchy

– Size – a mole may appear to get bigger

– Shape – a mole may have an irregular shape, may increase in height or not be symmetrical

– Elevation – the mole may develop a raised area