A group of organizers for the ‘Save America’ rally that played out before the Capitol riot were ensconced in the Willard Hotel Jan. 6th – ordering booze and charcuterie as Capitol police clashed with rioters, leaked group text messages reveal.

The mother-daughter team of Amy Kremer and Kylie Jane Kremer helped organize the Women for America First Save America on Jan. 6th. Each have been subpoenaed by the House select Jan. 6th committee.

Amy Kremer, who was also a founder of the Tea Party movement, put in for fancy hors d-oeuvres on the evening of the 6th – in a replay of the prior night’s noshing at the Willard Intercontinental Hotel near the White House.

Group chat messages viewed by Rolling Stone recount her party planning as beleaguered Capitol Police countered hundreds of protesters and rioters. Sources told the publication attendees at the Willard event were also drinking champagne in the hotel suite that night.

But while the organizers put in for cured meats on their own initiative, the group texts also appear to show deference to the White House on the planning for Jan. 6th.

‘We are following POTUS’ lead,’ Kylie Jane Kremer wrote in one message, using an abbreviation for the president. She wrote on Jan. 1st amid the rush to secure permitting for the rally on the Ellipse just steps from the White House, at an event where President Trump would speak. She indicated to associates she didn’t want them to put the word out until Trump moved: ‘just FYI – we still can’t tweet out about the ellipse,’ she wrote. 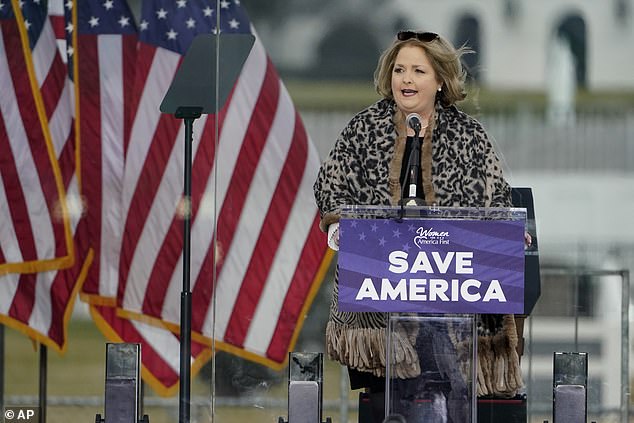 In this Jan. 6, 2021 file photo Amy Kremer, Chairwoman of Women for America First, speaks in Washington, at a rally in support of President Donald Trump

March For Trump activist Dustin Stockton, who the House select Jan. 6th committee subpoenaed on Monday for documents and testimony, wrote a message with an inquiry about credentials for rally VIPs. ‘It’s a combination of us and WH,” Kylie Jane Kremer responded.

The article says organizers ‘coordinated closely with the White House before Jan. 6.’

The menu order came hours after the rioters first breached the Capitol.

‘We ordered dinner again tonight. Sorry, but we forgot to take orders in the chaos of the event this morning, so we just ordered the same thing as last night. I figured that was better than not eating. Lol,’ Kremer wrote in the meal message. ‘Cheese & Charcuterie should be here at 6PM and dinner around 7PM.’

The order came at about the time the National Guard finally arrived on Capitol grounds to help restore order and reinforce Capitol Police and District of Columbia police.

The Willard is the same hotel that the House select Jan. 6th committee says served as a ‘war room’ for another group of organizers of events that day.

Earlier messages give indications some organizers engaged in some boozing in between promoting claims of electoral fraud. The Kremers had helped organize a bus tour immediately following the Nov. 3rd election.

In a December 27 message, Amy Kremer told her daughter: ‘Kylie, you need to slow your roll on the wine RIGHT NOW. We have so much work to do and not enough time to get it done.’ 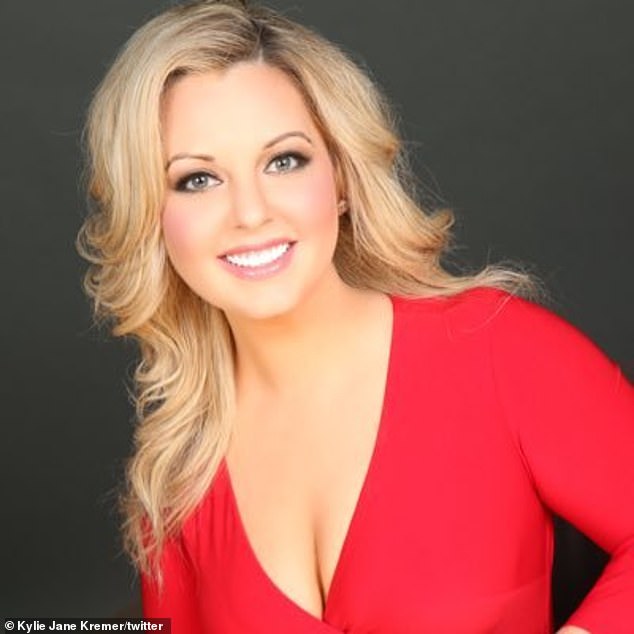 In a December 27 message viewed by Rolling Stone, Amy Kremer told her daughter Kylie Jane Kremer: ‘Kylie, you need to slow your roll on the wine RIGHT NOW. We have so much work to do and not enough time to get it done.’ 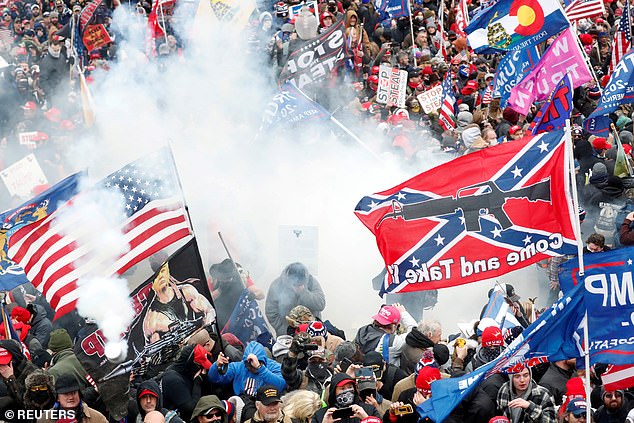 Tear gas is released into a crowd of protesters, with one wielding a Confederate battle flag that reads “Come and Take It,” during clashes with Capitol police at a rally to contest the certification of the 2020 U.S. presidential election results by the U.S. Congress, at the U.S. Capitol Building in Washington, U.S, January 6, 2021 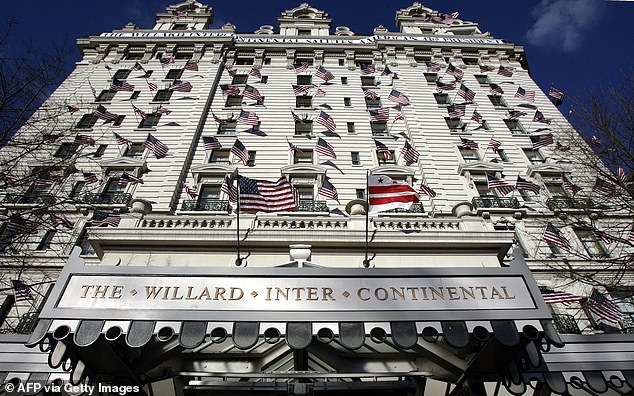 The organizers were camped out at the luxury Willard Intercontinental Hotel

She wrote in another message: ‘There will be no more drinking on this trip.’

A ‘March For Trump’ member said guests in the suite were ‘totally sloshed that night.’ A source who worked at the rally told the publication there were upwards of a dozen people in the suite and it was ‘stocked up with wine.’

A Willard in-room menu features a charcuterie and cheese plate for $24. Other offerings include duck pate for $20 and Escargot Bourgogne. Sparkling wines run the gamut from $70 to $795 for high end champagnes.

In a Jan. 6 ‘Statement on Violence at the Capitol,’ Kremer said ‘We are saddened and disappointed at the violence that erupted on Capitol Hill, instigated by a handful of bad actors, that transpired after the rally.’

She denounced violence of all types, then complained: ‘Unfortunately, for months the left and the mainstream media told the American people that violence was an acceptable political tool. They were wrong. It is not.’

‘The movement that was launched by President Donald J. Trump is one that respects the rule of law, supports our law enforcement and believes that violence has no place in politics today,’ she said.

Women for America First is a dark money group that is not required to disclose its donors.

According to the September 29 subpoena letter: ‘According to press reports, you, others working with you and WFAF to organize the January 6th rally, collectively communicated with President Trump, White House officials including Chief of Staff Mark Meadows, and others about the rally and other events planned to coincide with the certification of the 2020 Electoral College results.’