Hamas militants have launched dozens of rockets at Israel after Israeli air strikes killed senior commanders and felled a multi-storey building in Gaza.

The escalation of the fighting, which began on Monday, has prompted the UN to warn of a “full-scale war”, reports the BBC.
At least 65 people in Gaza, including 14 children, and seven people in Israel have been killed since then.
The fighting erupted after weeks of rising Israeli-Palestinian tension in East Jerusalem which culminated in clashes at a holy site revered by Muslims and Jews.
Further violence in towns in Israel with mixed Jewish and Arab populations has led to 374 more people being arrested on Wednesday evening, Israeli police said, and 36 officers being injured.

There were reports in Israeli media of both Jewish and Arab individuals being attacked by mobs in Israeli towns and cities. They include a Jewish man who suffered injuries at the hands of Arabs in the city of Acre, and an Arab man who was reportedly injured in Bat Yam.

Palestinian militants have been firing rockets into Israel since Monday night, and Israel has responded by hitting targets in the territory.

On Thursday morning, the IDF said about 1,500 rockets had been fired from Gaza into Israeli cities since hostilities escalated at the start of this week.

The Hamas-run health ministry in Gaza says that more than 400 people have been injured there since the conflict began, in addition to the 67 who have died.

Mr Netanyahu said the government would use all its strength to protect Israel from enemies on the outside and rioters on the inside.

But the Palestinian Authority condemned Israel’s “military aggression” in a tweet, saying it was “traumatizing an already beleaguered population of 2 million people”. 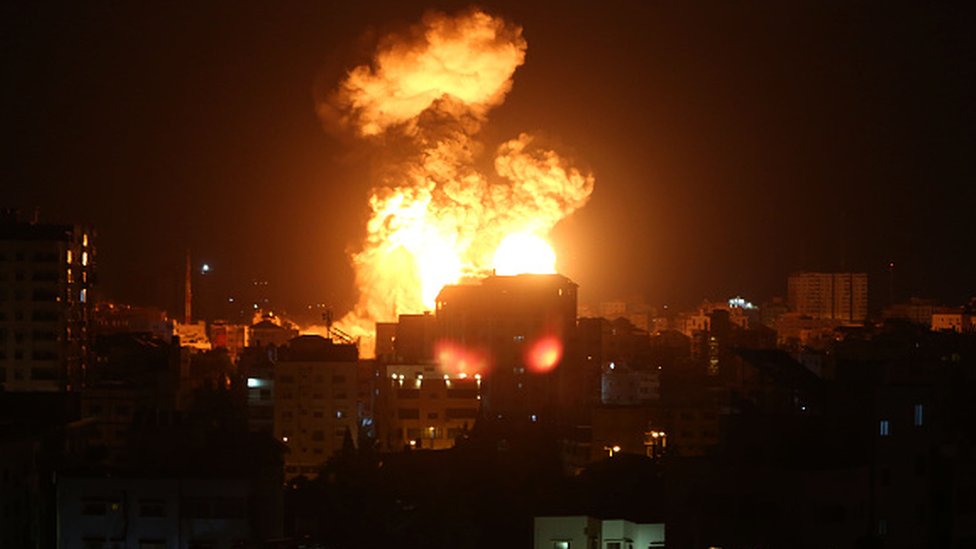 What happened on Wednesday?

Militants in Gaza said they had fired 130 rockets into Israel in response to an Israeli aid raid which destroyed the al-Sharouk tower in Gaza City.
The tower, which is the third tall building to be destroyed by air strikes this week, housed al-Aqsa TV, the station run by Hamas.

Israel said it had killed senior Hamas officials in Gaza, and was also targeting missile launching sites. Hamas confirmed a senior commander and “other leaders” had died.
The Israel Defence Forces (IDF) said on Wednesday that their strikes on Gaza were the largest since the conflict in 2014.
Residents had been warned to evacuate the buildings before fighter jets attacked; however health officials said there were still civilian deaths.
Five members of one family were killed in an air strike on Tuesday, including two young brothers, according to AFP news agency.

“We were laughing and having fun when suddenly they began to bomb us. Everything around us caught fire,” their 14-year-old cousin, Ibrahim, said, breaking down in tears as he described their death.
Meanwhile millions of Israelis were in bomb shelters on Wednesday evening, according to the IDF, after sirens warning of rockets sounded across the country.

The child killed in the Israeli town of Sderot was named as Ido Avigal, aged six, who was caught in an attack on a block of flats.
Anna Ahronheim, the defence and security correspondent of the Jerusalem Post, described spending Tuesday night in a shelter with her five-month-old baby.

“To hear hundreds of interceptions and even to hear rockets fall near us was horrifying,” she told the BBC.
On Wednesday morning an Israeli soldier was killed by an anti-tank missile fired from Gaza into Israel, authorities said, while two Israeli Arabs died in Lod when a rocket hit their car.