The FBI is facing backlash after ‘hiding’ the fact that Brain Laundrie, the fiancé of murdered hiker Gabby Petito, had a gun and should have been considered ‘armed and dangerous’ as the nation searched for him.

Laundrie, 23, was reported to have died from a single, self-inflicted gunshot wound to the head, his lawyer Steve Bertolino said on Tuesday.

Bertolino, told DailyMail.com that one of the family’s guns was missing when Laundrie vanished, but that they kept it secret because they didn’t want the public to panic. It remains unclear where the gun is now.

‘We didn’t want the public going into a frenzy on that. I don’t think they considered him dangerous to anybody he met on the street,’ Bertolino said.

A gun was hanging in his bedroom in photos taken by a real estate website before he vanished.

For weeks, the FBI declined to answer questions regarding if Laundrie should be considering ‘armed and dangerous.’

The public is now expressing fury toward the FBI for withholding the information, with some questioning ‘What is the FBI hiding?’ and ‘Why do we even have an FBI?’

One user, who goes by Tessarossa on Twitter, said: ‘Wow. I saw the update on the news and this blatantly obvious question didn’t even occur to me. None of this makes sense. What is the FBI hiding?’

Brian Laundrie, the fiancé of murdered hiker Gabby Petito, died of a single gunshot wound to the head, his autopsy has revealed. He is shown in police bodycam footage in August, during his trip with Petito 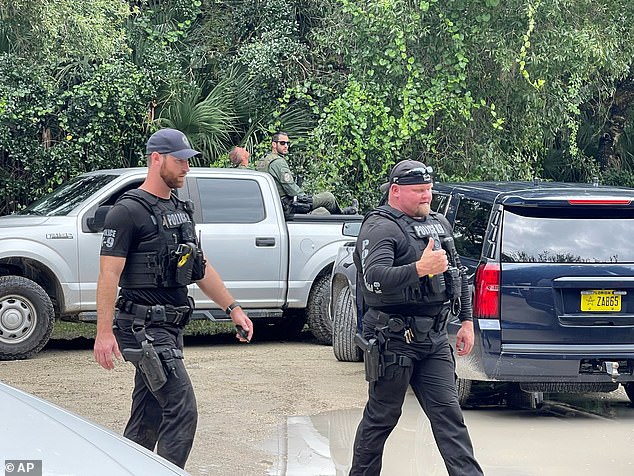 The FBI is now facing backlash after ‘hiding’ that Laundrie was ‘armed and dangerous,’ knowing the public was assisting in the search for him. Many people claimed to have had encounters with Laundrie

Another user questioned: ‘Why do we even have an FBI? During the entire search for Brian Laundrie, not once was the public warned that he may be armed!’

Others questioned why authorities did not disclose the vital information knowing that the public was assisting in the search, with many claiming to of had encounters with him.

‘Le and FBI have alot to answer for in the Gabby petito and Brian laundrie case knowing that he had a firearm when he went “missing” and not notifying the public of an armed and dangerous person knowing the public were looking 4 him smh.’ 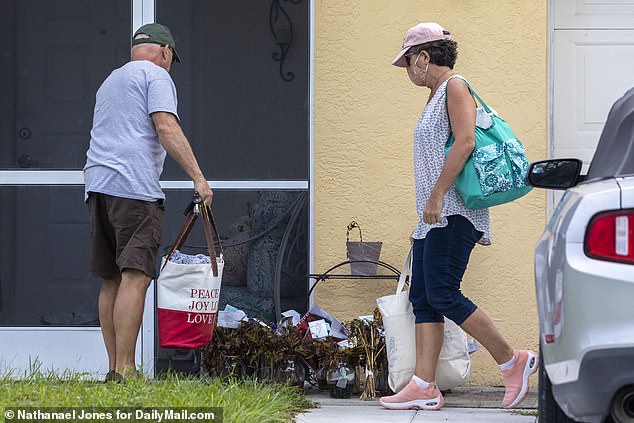 ‘Additional charges’ could be made toward Laundrie’s parents (pictured), the Petito family lawyer suggested

Another joked that ‘if the gun is not recovered maybe the fbi should ask the dad to go get it for them.’

In addition, the Petito family lawyer floated the idea that ‘additional individuals’ could face charges in connection to their daughter’s murder.

The family said they would make a ‘statement’ following the determination, and were asked ‘to wait for the United States Attorney’s Office to make a determination on whether any additional individuals will be charged.’

The 23-year-old went missing in September after returning alone from a trip with Petito, whose body was found in the Grand Teton National Park in Wyoming. 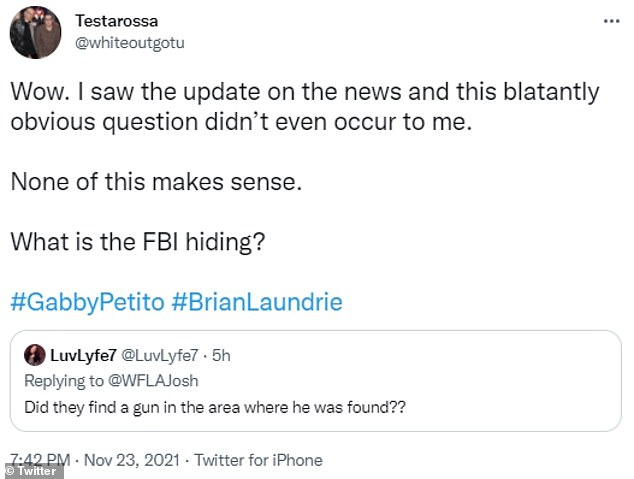 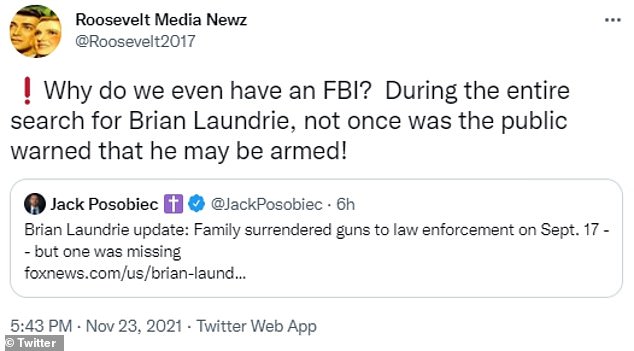 The public questioned ‘Why do we even have an FBI’ and ‘What is the FBI hiding?’ after it is revealed Laundrie was armed while on the run

His remains were discovered in the Florida reserve near his parents’ house on October 20.

An initial autopsy was inconclusive but the Laundrie family lawyer, Steve Bertolino, said on Tuesday he had been told by the forensic anthropologist who took over that Laundrie died by a single gunshot wound to the head.

‘Chris and Roberta Laundrie have been informed that the cause of death was a gunshot wound to the head and the manner of death was suicide.

‘Chris and Roberta are still mourning the loss of their son and are hopeful that these findings bring closure to both families,’ the lawyer said.

Laundrie with his fiancee, Gabby Petito, whose body was found in Wyoming on September 19

When Laundrie returned home to his parents’ house in Florida on September 1, Petito was not with him.

He had no contact with her family, who were becoming increasingly worried that she hadn’t been seen or heard from.

He told them he was going camping in the park.

On September 19, Gabby’s strangled body was found in Wyoming. Police say she had been dead for three or four weeks.

Police started searching the park for Brian in the hopes of finding him alive to question him over Gabby’s death. 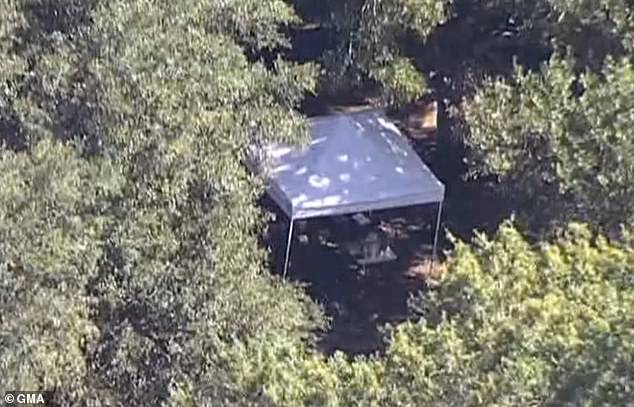 Chris and Roberta Laundrie are shown arriving home in October after their son’s remains were found. They were widely criticized for not turning their son into police after Gabby was reported missing

The young couple had been on a cross-country van trip but it turned sour and in August, just a few weeks before she died, they were ordered apart for the night by police.

Witnesses had seen them arguing in their van and were worried.

The police however ruled that Petito was the aggressor.

Chris and Roberta Laundrie, Brian’s parents, have been widely condemned for not talking with Petito’s family or turning their son in to police when he returned home from his trip, especially after she was reported missing.

He left their home on September 13, two days after her family on Long Island, New York, reported her disappearance.

Petito’s family criticized the Laundries for not helping them.

August 12: Police in Moab, Utah respond to a domestic incident involving the couple

Aug. 17: Laundrie allegedly flies back to Florida to ‘clear out a storage unit’

Aug. 21: Petito’s father, Joseph Petito, has his last FaceTime video call with his daughter who was in Salt Lake City, Utah

Aug. 23: Laundrie flies back to Utah to ‘rejoin Gabby’ on their trip

Aug. 24: Petito is last seen at a hotel in Salt Lake City with Laundrie

Aug. 25 or 26: The couple chats with the owner of a shop called ‘Rustic Row’ in Victor, Utah for about 20 minutes

Aug. 27: Video of Petito’s van was taken by blogger Jenn Bethune around 6.30 pm at the Spread Creek Campground; Witnesses say they saw a ‘commotion’ with the couple at Merry Piglets Tex-mex restaurant in Jackson, Wyoming

Aug. 29: The day that Wisconsin TikToker Miranda Baker claimed that she and her boyfriend were approached by Laundrie at Grand Teton National Park and asked them for a ride at 5.30pm

Aug. 30: Schmidt receives the last text from Petito’s phone: ‘No service in Yosemite’

Sept. 1: Laundrie returns to his parents’ home in North Port, Florida in a van without Petito

Sept. 11: Schmidt reports Petito missing to authorities in New York; Petito and Laundrie’s van was impounded by police in Florida that same day

Sept. 13: Laundrie’s lawyer says on October 5 that his parents now ‘believe’ this was the day they last saw him heading for a hike

Sept. 14: Laundrie issues a statement about Petito’s disappearance through his lawyer; Laundrie’s parents claim on September 17 that Laundrie left his parents’ home for a hike this day and they hadn’t seen from him since

Sept. 15: Laundrie is officially named a person of interest in Petito’s case

Sept. 19: Bethune realizes she has video of Petito’s van around 12am and submits the FBI with the footage 10 minutes later; Officials announce a body was found near Grand Teton National Park that matched Petito’s description in the afternoon

Sept. 21: Coroner confirms remains found in Grand Tetons belong to Petito. Her death is ruled a homicide but her cause of death is still under invesetigation

Sept. 22: Neighbors say they saw the Laudrie family pack up their detached camper on the day Gabby was reported missing. DailyMail.com photos show the camper was back in the driveway two days later, on September 13

Sept. 23: FBI issues an arrest warrant for Laundrie for ‘use of unauthorized access device’ for fraudulently using a Capitol One Bank debit card that was not his between August 30 and September 1 to spend $1,000; A probe is launched into the police handling of the Utah police incident on Aug. 12; Laundrie’s parents visit their attorney in Orlando

Sept. 25: Dog the Bounty Hunter joins the search for Laundrie

Sept. 26: A funeral is held for Petito in Holbrook, New York, and her family launch a charity to help parents find missing children

Sept. 27: Manhunt for Laundrie in the Carlton Reserve is scaled back after 10 day search doesn’t find him. Dog the Bounty Hunter says Laundrie and his parents stayed at Fort De Soto Park from September 1-3 and September 6-8 – and that on the latter visit only the parents left

Sept. 30: Bodycam footage from a second officer at the August 12 incident is released showing a distressed Petito admitting Laundrie hit her; FBI agents collect more evidence from the Laundrie home

Oct. 1: It emerges Laundrie’s sister had contact with him after she said she did

Oct. 2: A hiker along the Appalachian Trail claims to have seen Laundrie near the border of Tennessee and North Carolina

Oct. 3: Investigators searched the area on the Appalachian trail for any signs that Laundrie had been there

Oct. 4: Laundrie’s sister told protestors outside her home that her family has been ignoring her after they rebuked her story and that she does not know where her brother is

Oct 5: Laundrie’s sister appeared on Good Morning America to say she would turn her brother in if she knew where he is;

Oct. 7: Laundrie’s father Christopher joins FBI agents on the search for his son at the Carlton Reserve but the search brings up no clues

Oct. 12: Teton County Coroner Dr. Brent Blue announces autopsy findings which show Petito died by strangulation; No specific date of death was given – only that she was dead 3-4 weeks before her body was found

Oct. 16: Petito’s parents are seen collecting her ashes from the Valley Mortuary in Jackson, Wyoming