Dan Andrews’ wife has spoken out for the first time after protesters threatened to hang her husband at widely condemned protests this week.

Catherine Andrews took to Twitter to thank those who sent messages of support following several days of ugly demonstrations in Melbourne.

Protesters wheeled a wooden gallows to the steps of the Victorian Parliament hanging an effigy of the premier on Monday night, with video showing hundreds of demonstrators cheering in support.

The disturbing stunt came after rally-goers used alarming imagery including nooses and swastikas on Saturday to protest the government’s controversial pandemic management Bill – which gives the premier unprecedented powers to shut down the city.

On Tuesday, a protester told the angry mob: ‘I look forward to the day I get to see you dance on the end of a rope you evil little b*****d.’

This needs to be highlighted. Here are death threats directly aimed at Dan Andrews on the microphone.

“I look forward to the day I get to see you dance on the end of a rope” pic.twitter.com/E5zQQ0tNAz 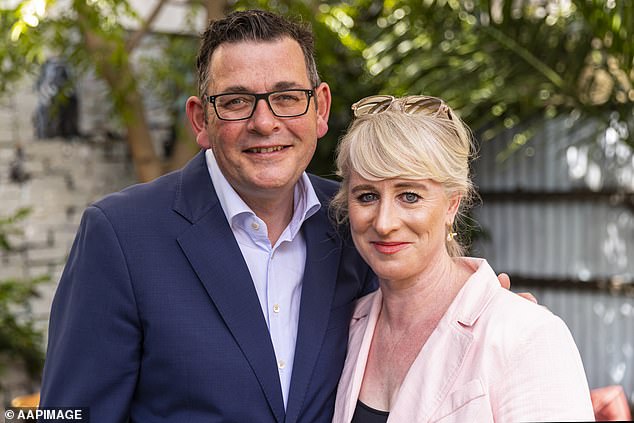 Mrs Andrews took the vile threats in her stride, offering a classy response to the horrifying ordeal.

‘We have received so many beautiful messages today from all over. Thank you,’ she said.

‘We are reminded that the light shines in the darkness and the darkness will not overcome it. As ever #IStandWithDan #GoHigh.’

Melbourne’s streets on Saturday were swamped with angry protesters who rallied at the foot of Parliament House in pouring rain to oppose controversial legislation which would see premier Andrews given sweeping powers to make a pandemic declaration without needing it to be signed off by medical advisers.

The hard-hit city suffered through six gruelling lockdowns and spent more collective time living under stay-at-home orders than any other place on earth.

Posters depicting Mr Andrews as Adolf Hitler – with a swastika armband replaced by a symbol for the Australian Broadcasting Corporation – were handed out to angry protesters in a move that has since been widely condemned. 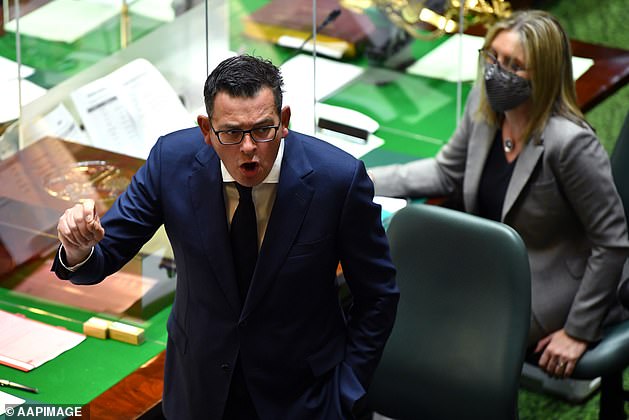 Another protester waved a placard placing the premier alongside the names of dictators including Joseph Stalin, Benito Mussolini and Chairman Mao Zedong.

In chilling scenes, at least two men were seen brandishing nooses, with one man brandishing a makeshift gallows with three nooses hanging from it.

Some waved Eureka and Trump flags, including one which portrayed the ex-United States president wielding an M-60 machine gun like movie action hero John Rambo.

Others adopted imagery of the Knights Templar and crusaders as they marched through the CBD shouting ‘Kill the bill’.

The Andrews Government hopes to pass the bill through the Legislative Council on Wednesday to have it in place before existing state emergency powers expire on December 15. 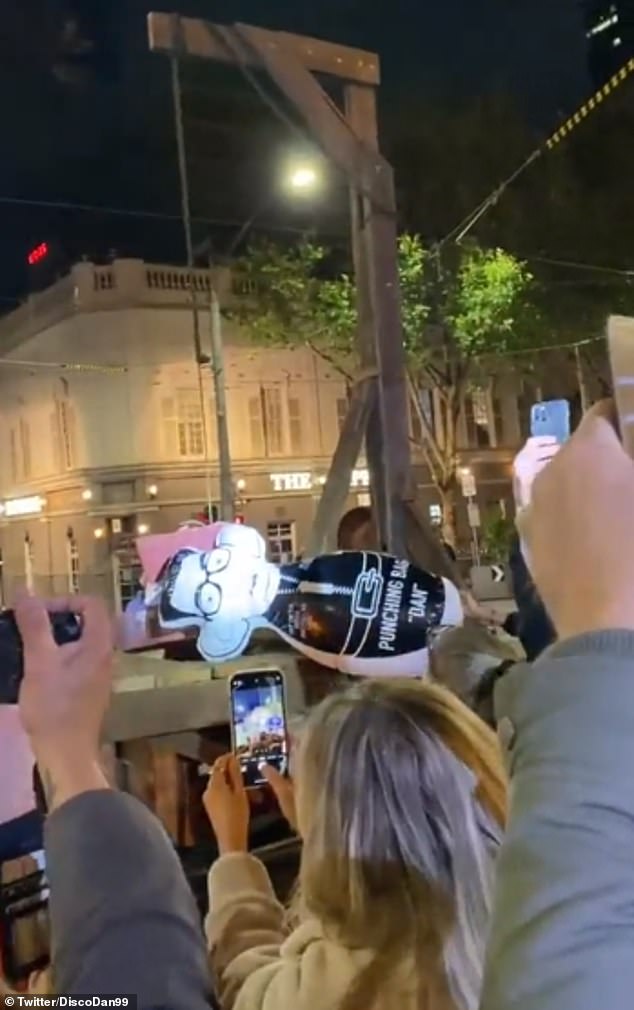 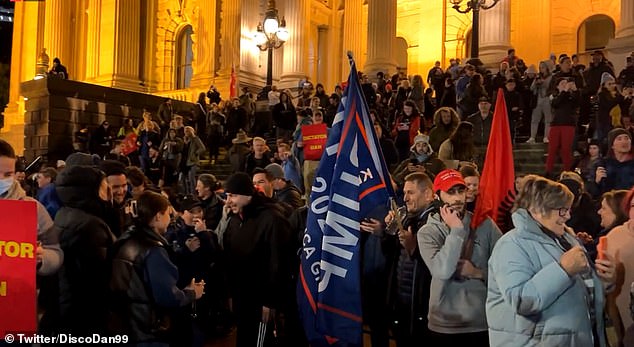 Images from the demonstration show hundreds of people singing and dancing outside the government building, holding placards and chanting against the Victorian premier

The bizarre scenes continued on Monday night when QAnon posters were spotted among the group as they wheeled in a full-size wooden gallows and tried to conduct a fake execution of a blow-up figure of Mr Andrews.

People reacted with anger to the images on social media, with one woman describing it as ‘domestic terrorism’.

‘They will be winding themselves up all week. By next Saturday, they will be in full on mob mode,’ a woman posted to Twitter.

‘Who will be held responsible when someone gets hurt or killed? Something needs to be done now!’ 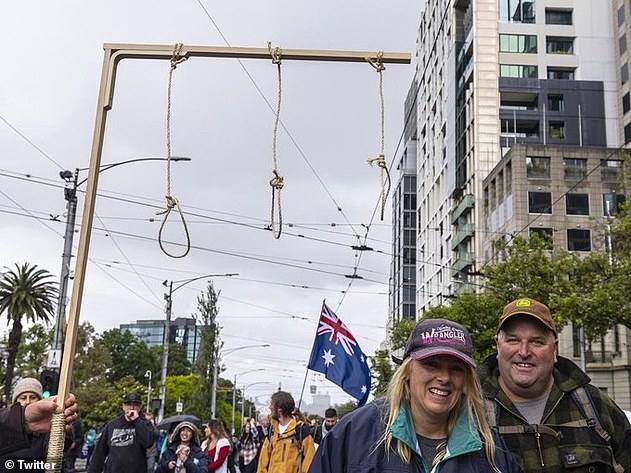 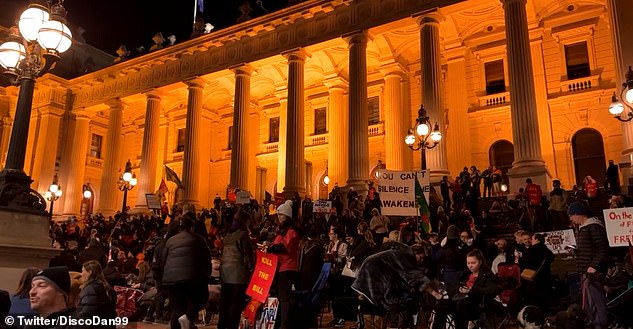 ‘Sickening. Surely this is far beyond acceptable protest behaviour. It is incitement to violence,’ another replied to the footage.

Others reacted to Tuesday’s microphone death threat where a woman called for the Premier to ‘dance on the end of a rope’ to the applause of the crowd.

‘This can not be ignored. It is a direct threat on a political leader,’ one person wrote.

Another said: ‘This is not ok. After what has happened in London with a politician being stabbed to death these threats must be addressed. This is not freedom of speech.’

‘This is horrifying… Is this the country we have become?’ a third said. 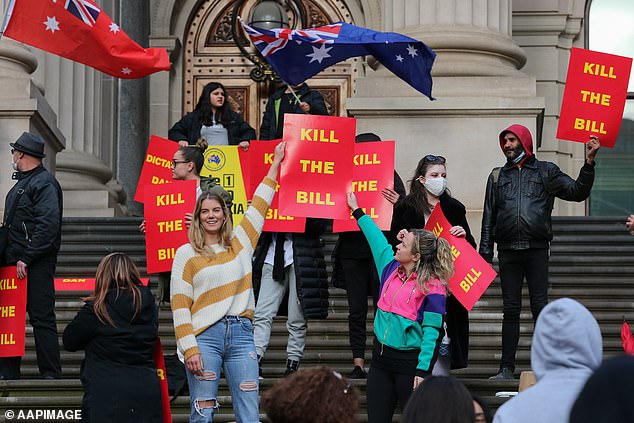 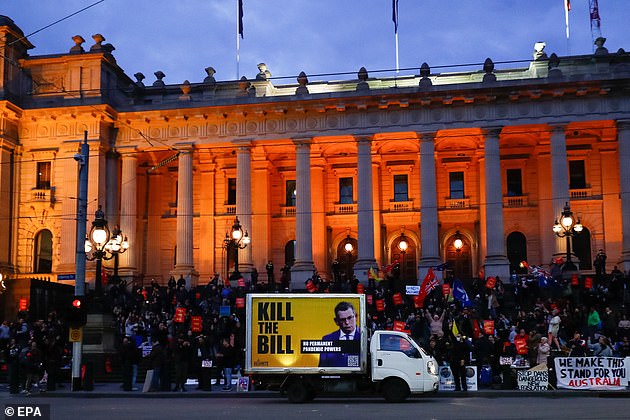