The controversial statue of President Theodore Roosevelt that sat outside the American Museum of Natural History in New York City for decades will find a new home in North Dakota.

The Theodore Roosevelt Presidential Library, which is set to open in Medora, North Dakota in 2026, announced their agreement with the City of New York for a long-term loan.

‘We are grateful to the Theodore Roosevelt Presidential Library for proposing a fitting new home for the Equestrian Statue,’ Vicki Been, New York City’s Deputy Mayor for Housing and Economic Development said according to a statement.

‘This long-term loan would allow an important part of the City’s art collection to be appropriately contextualized, and we look forward to continuing to work with the Library on next steps.’ 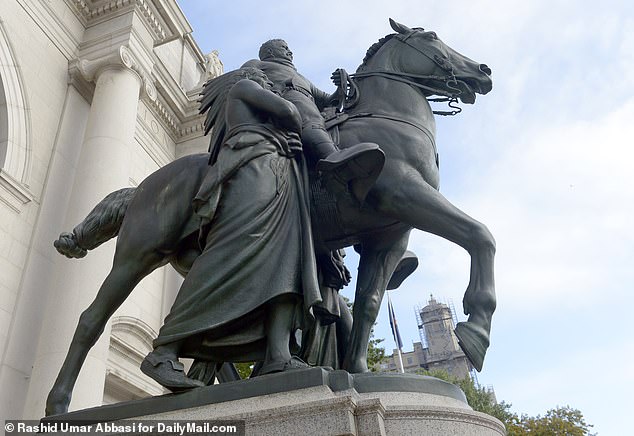 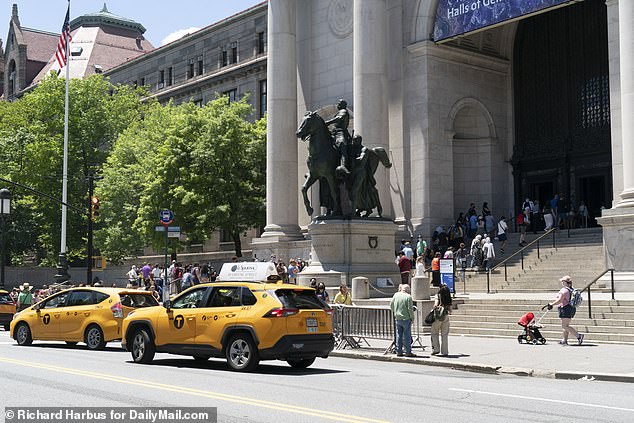 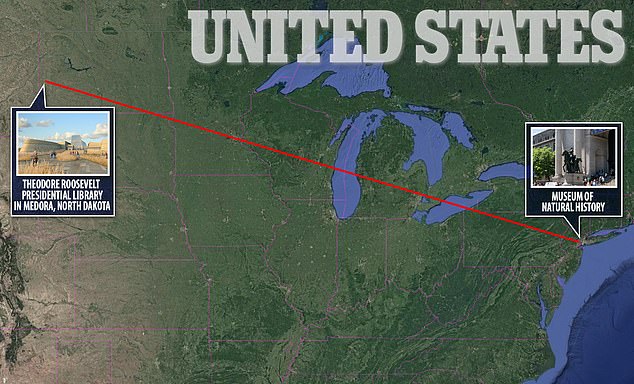 The Roosevelt statue was commissioned by the Board of Trustees of the New York State Roosevelt Memorial in 1929 and welcomed guests at the front of the American Museum of Natural History since 1940.

The piece was sculpted by James Earl Fraser and intended to ‘celebrate Theodore Roosevelt as a devoted naturalist and author of works on natural history,’ the museum says on its website, and notes that Roosevelt’s father, Theodore Roosevelt Sr., was one of the museum’s founders.

The statue has long been criticized, however, for its depiction of Roosevelt on horseback alongside a black man and Native American, which critics have said signifies a racial hierarchy in which Roosevelt stands higher than the other two.

‘Rather than burying a troubling work of art, we ought to learn from it,’ Theodore Roosevelt V, a descendant of the late president said.

‘It is fitting that the statue is being relocated to a place where its composition can be recontextualized to facilitate difficult, complex, and inclusive discussions.’

In 2019, the museum ran an exhibit about the statue and how it was perceived by the public. The ‘Addressing the Statue’ exhibition opened up a conversation with museum attendees about the place of the statue in today’s world. 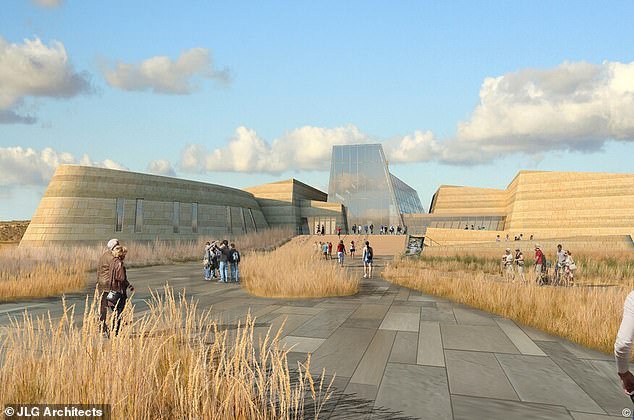 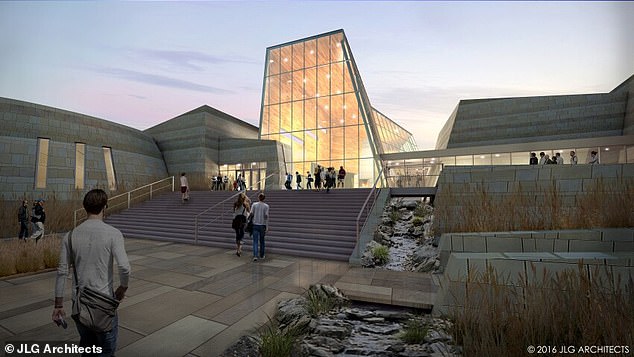 The Presidential Library in Medora, North Dakota is set to open in 2026 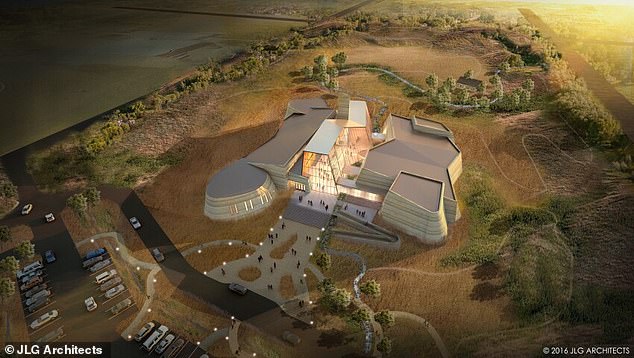 ‘Rather than burying a troubling work of art, we ought to learn from it,’ Theodore Roosevelt V, a descendant of the late President said commenting on the controversial statue’s move

Objections to the statue grew more forceful in recent years, especially after the murder of George Floyd that sparked a racial reckoning and a wave of protests across the US.

The museum is on city-owned property and Mayor Bill de Blasio supported removal of the ‘problematic statue.’

‘The American Museum of Natural History has asked to remove the Theodore Roosevelt statue because it explicitly depicts Black and Indigenous people as subjugated and racially inferior,’ de Blasio said at the time.

‘The City supports the Museum’s request. It is the right decision and the right time to remove this problematic statue.’

The museum released a statement at the time, saying: ‘Over the last few weeks, our Museum community has been profoundly moved by the ever-widening movement for racial justice that has emerged after the killing of George Floyd.

‘We also have watched as the attention of the world and the country has increasingly turned to statues and monuments as powerful and hurtful symbols of systemic racism.

‘While the Statue is owned by the City, the Museum recognizes the importance of taking a position at this time. We believe that the Statue should no longer remain and have requested that it be moved.’

After years of protests, in June, 2020, amid the demonstrations over the murder of George Floyd, the city vowed to have the statue removed.

The New York City Public Design Commission unanimously voted to remove the piece a year later.  The removal of the statue from the museum steps will take several months and is expected to begin later this fall. 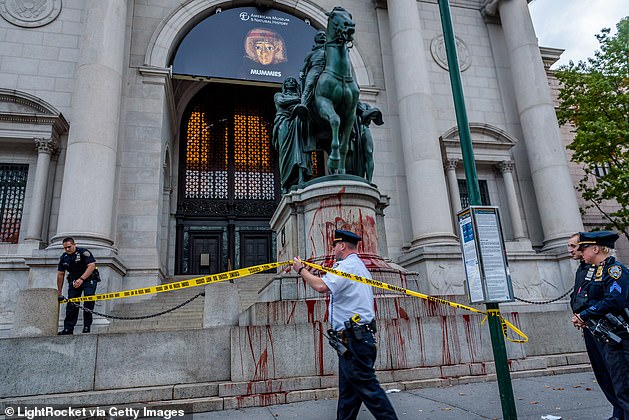 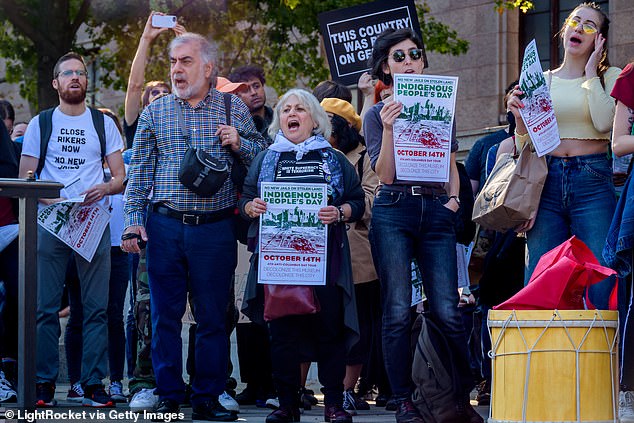 Bowing to pressure from the protestors on June 21, 2021, the New York City Public Design Commission voted unanimously to relocate the statue

Roosevelt’s legacy has been cast in a new light in recent years, with his support of eugenics entering the spotlight as anti-racism protests took hold of the country following the killing of George Floyd.

The statue has been defaced on several occasions through the years, most recently this summer when building security informed police a few minutes after midnight that two people – a woman and a man – had sprayed the base of the bronze statue with paint before running off.

The statue’s removal comes as monuments to figures now deemed racist or problematic by activists have been removed from sites across the country.

In particular, statues of Confederate figures in the South have been toppled in the wake of the police killing Floyd, which sparked nationwide protests demanding an end to systemic racism.

Statues that paid tribute to the likes of Christopher Columbus, Robert E. Lee and George Washington were among those removed or defaced during anti-racism protests.

While there’s no official number of statues taken down over the last year, the Southern Poverty Law Center previously revealed that 168 Confederate symbols were removed in 2020, including 94 monuments. 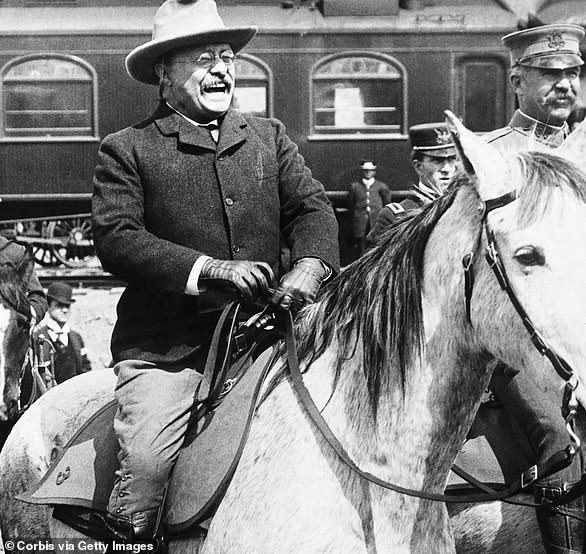 Theodore Roosevelt at Yellowstone Park. He was the founder of the national parks system

Theodore Roosevelt was the 26th president of the United States from 1901 to 1909.

The Republican, whose face is depicted on Mount Rushmore alongside George Washington, Thomas Jefferson, and Abraham Lincoln, is credited with laying the groundwork for the modern Democratic party.

Roosevelt had developed a ‘cowboy’ image and that of a brave, masculine warrior during his presidency.

In more recent years, however, Roosevelt’s legacy has been viewed through a more critical lens. 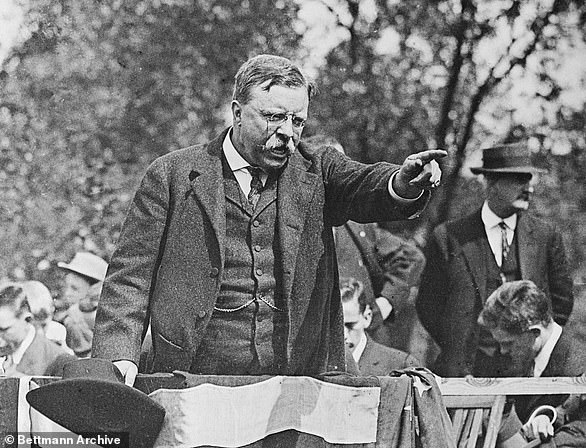 He was a vocal supporter of eugenics, with a belief in white superiority, and that the poor and criminals should be sterilized to prevent procreation.

When he famously fought in Cuba as part of the Rough Riders during the Spanish American War of 1898, he would refuse to give credit to the African American soldiers that historians say were crucial to victory after his disastrous decision in battle to charge up San Juan hill.

He would write in his memoir that black soldiers could only be effective when led by white officers, according to Smithsonian Magazine.

Detractors have also said that Roosevelt’s establishment of the national parks system came at the expense of some Native American tribes, who were displaced during many of the parks’ founding. 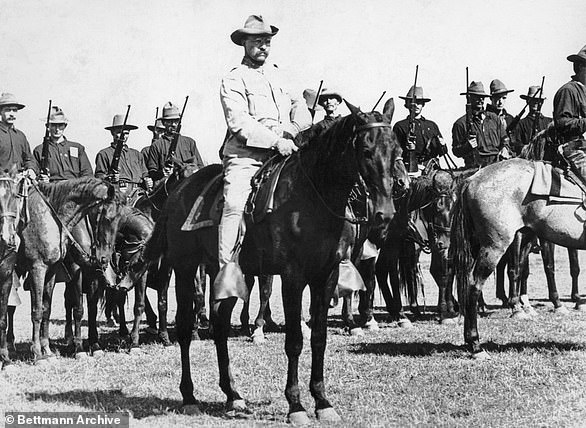 Roosevelt with the Rough Riders during the Spanish American War. His detractors said his actions there led to further American interventions in Latin America

Other critiques of Roosevelt’s legacy involve his imperialist tendencies, and that his involvement in the war would pave the way for further, colonial interventions in the Phillipines, Hawaii, Guam and Puerto Rico, according to the New York Times.

His progressive policies, however, leveled the playing field between rich and poor, and this mantle would be carried forward in the modern liberalism of his cousin, Franklin D. Roosevelt’s presidency.