Chicago’s powerful police union boss has effectively dared Mayor Lori Lightfoot to suspend up of half the crime-plagued city’s cops by telling them to ignore her order to submit their vaccination status by Friday.

Head of the Chicago Branch of the Fraternal Order of Police John Catanzara has shared a video urging his members – who represent 11,000 of the city’s 13,000 sworn officers – to file exemption requests on Thursday instead.

‘We’re going to provide three forms later today, for religious, for medical, and for the conscientious exemption,’ the head of the Chicago branch of the Fraternal Order of Police, John Catanzara, explained in a 10-minute video message posted to the union’s YouTube page.

The union boss then adds: ‘Do not fill out the portal information,’ a reference to the website where city workers, including cops, have been ordered to submit their vaccination statuses by Friday. 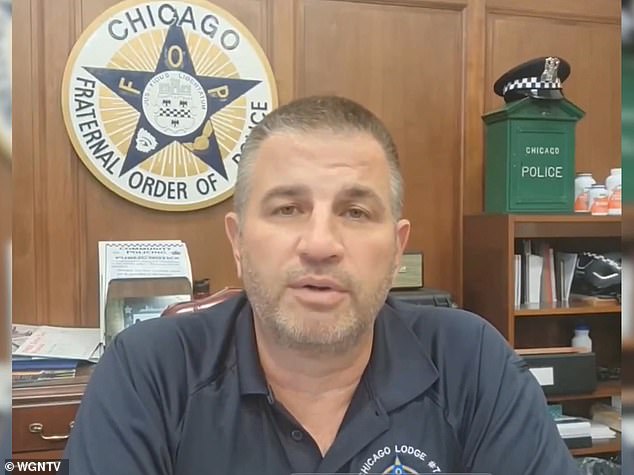 ‘We’re going to provide three forms later today, for religious, for medical, and for the conscientious exemption,’ the head of the Chicago branch of the Fraternal Order of Police, John Catanzara, explained in a 10-minute video message posted to the union’s YouTube page

The stern video message explicitly instructs officers to defy Lightfoot’s order, and comes just days before city workers – including cops – must share their vaccine status using the aforementioned portal by Friday or face being put on unpaid leave.

In the video, Catanzara appears to dare Lightfoot to fire members of his police force as an unprecedented crime wave plagues the Windy City, and predicted at least half of the department would comply with his request.

‘It’s safe to say the city of Chicago will have a police force at 50 percent or less,’ Catranzara said at one point in the recorded message, sitting at his desk at the union’s office on the city’s West Side.

‘Whatever happens because of that manpower issue,’ the union head added, ‘that falls at the mayor’s doorstep.’

Blasting the vaccine mandate, he added: ‘Hell no is the best way I can put it, across the board.

‘I do not believe the city has the authority to mandate that to anybody, let alone that information about your medical history.’

The number of officers already vaccinated for now is unclear – with Chicago Police Department spokesman Don Terry admitting in August ‘We’re not keeping tabs on it at this moment; we don’t have a number.’ 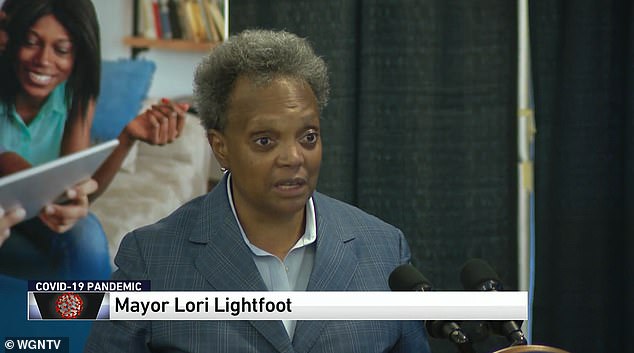 Mayor Lori Lightfoot’s recently put a mandate into effect that forced all civic employees to get vaccinated or face unpaid leave. City employees – including the 13,000 sworn officers that comprize Chicago’s police department, must report their vaccination statuses to the city by Friday

What’s more, the latest data concerning the exact number of vaccinated officers is somewhat up for debate, with WBEZ Chicago reporting in May that less than 3,600 officers had received at least one dose of the jab, while The Washington Post placed the number at somewhere around 4,000 that same month.

Lightfoot responded to Catanzara’s strong words at a news conference the next day, saying that the city was ‘prepared’ for any outcome – but was sure to add that Catanzara was ‘doing a patent disservice to his members every single day’ by encouraging police to push back against the mandate.

She did not comment further on what exactly her plans are if she does follow through on her threat, and Chicago loses thousands of cops. Any bending of Lightfoot’s own rules would be seen as humiliating for the city leader, who has faced an increasing barrage of criticism from officers.

Over the summer, Catanzara revealed that he himself has received the COVID-19 vaccine – but stands behind those who have chosen not to – including members of his union. 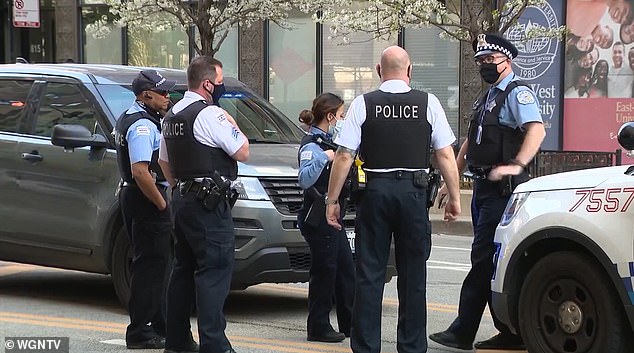 At least 3,600 Chicago officers have already received at least one dose of the vaccine, but Catanzara says that the thousands that remain should have the right to choose 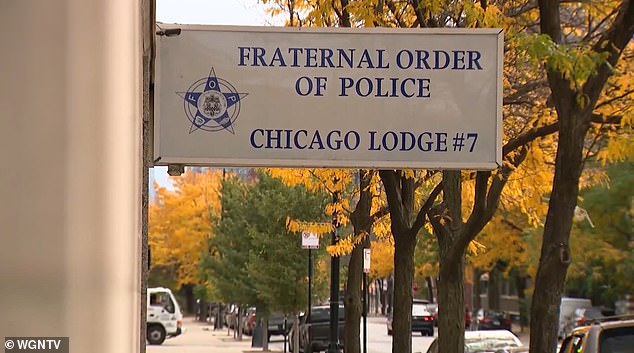 ‘It’s safe to say the city of Chicago will have a police force at 50 percent or less,’ Catranzara said at one point in the vide message he recorded from his desk at the Fraternal Order of Police Union office on the city’s West Side

‘That was a personal choice I made because I want to be able to travel without restrictions – that’s why I got the COVID shot.’ Catanzara said in August, after Lightfoot first announced the city’s vaccine mandate.

‘Many others decided not to,’ he went on, ‘and I absolutely respect and understand their position on why they don’t want to do it.’

The union chief even went as far as to equate the city’s mandate to that of a facist regime – namely, Nazi Germany.

‘When governments, whether it’s Nazi Germany or modern-day Chicago, try to start – or any other major city, like New York and many others who are doing this – try to create policies that mandate their employees first, to have to do things to their bodies, it will not stop there,’ he told The Chicago Sun-Times in August.

‘You are opening up the door for the citizens to be next.’

Catanzara later apologized for the comments, but says he still vehemently opposes the mayor’s imposed mandate – especially when it comes to members of his department.

The city of Chicago’s police department has been increasingly at odds with Lightfoot – a Democrat who publicly supported the ‘defund the police movement’ after the death of George Floyd in 2020 and slashed the force’s budget by $59 million that same year – since she was elected in 2019.

Lightfoot has since denounced the ‘defund the police’ movement, backtracking in August after the shooting death of Officer Ella French earlier that month – unveiling a new plan to ‘refund the police.’ 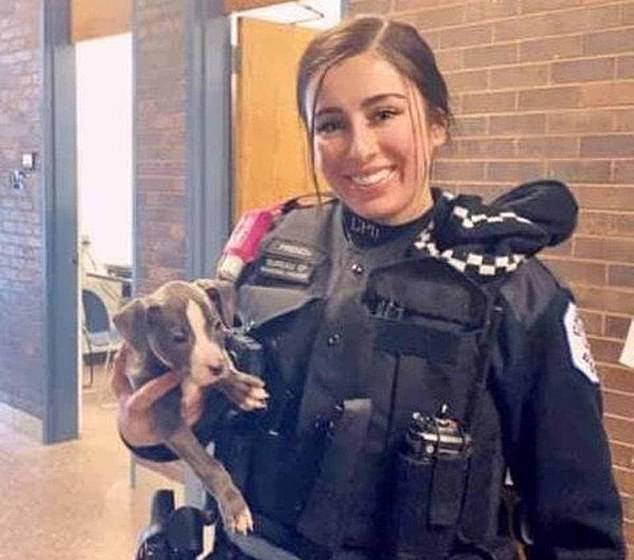 The shooting death of Officer Ella French, 29, in August formed an even bigger rift between the already-at-odds police department and the mayor – who slashed the force’s budget by $59 million before the officer’s murder during a routine traffic stop

Last month, Lightfoot unveiled a a $16.7 billion spending plan Monday that will boost funding for police, lifting the Chicago Police Department’s annual budget to $1.9 billion, up from $1.7 billion in 2021,

The plan relies on federal money to help dig the city out of its current deficit, and outlines prospective funding for a host of new community programs that she says will help the troubled city pull through the ongoing pandemic and address the prevailing issues of rampant gun violence and crime.

The proposed budget comes after the mayor announced in August that she expected funding for the city’s police department would change in the coming months, with the city hopelessly entrenched in a $73 million budget hole.

Lightfoot asserted to attendees of a conference discussing the proposed changes that ‘we have to make sure we are continuing to provide resources to recruit the next generation of police officers and make sure we’re doing that recruitment in a way that reflects diversity of the city.’

Meanwhile, violent crimes are up across the board in The Windy City. 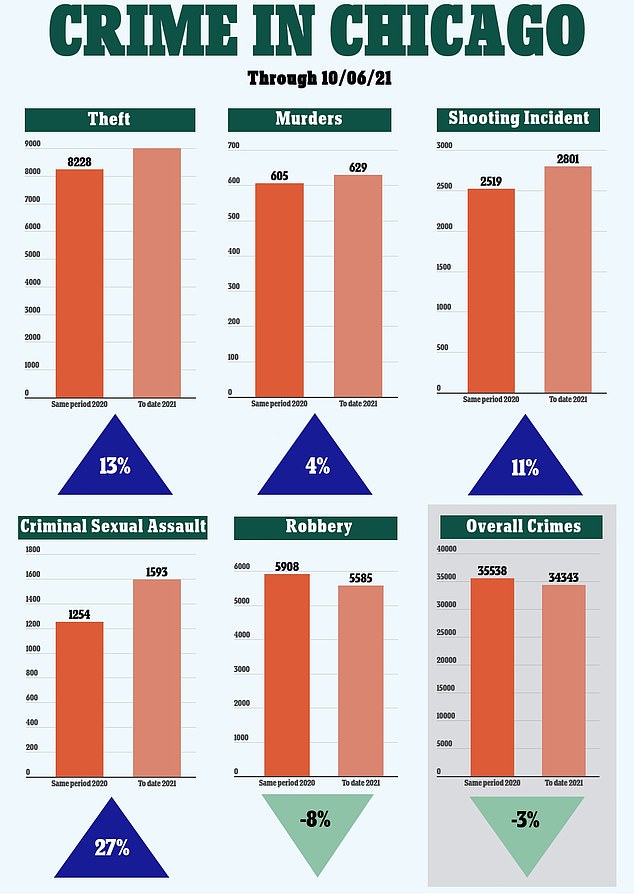 Violent crimes are up across the board in Chicago, with murders are up a whopping 56 percent since 2019, and 4 percent since 2020. According to the 2020 Uniform Crime Report released in late September by the FBI, 94 percent of the homicides were committed with a firearm

Murders are up a whopping 56 percent since 2019, with more than 200 more murders being committed in 2021 than in 2019 – before the pandemic inspired an influx of crime to plague the city’s streets.

Violent assaults are also up, with nearly 100 more cases of aggravated battery taking place this year than in 2019, before the pandemic – with more than two months left to go.

Meanwhile sexual assaults and rapes are up by more than 25 percent in the past year.

With that said, gun violence is arguably the city’s most pressing issue – with 1,606 people shot in this past summer alone – the population equivalent to many American small towns.

From June to August this year 261 Chicago citizens were killed, on pace to be the deadliest stretch in nearly a quarter-century for the city.

According to the 2020 Uniform Crime Report released in late September by the FBI, 76 percent of homicides nationwide were committed with a firearm.

However, in Chicago, fatal shootings accounted for 94 percent of all homicides so far this year – compared to still-dismal 90 last year.

The influx of firearms into the hands of Chicago criminals spurred Chicago Police Superintendent David Brown to label his own city the ‘ground zero for violence,’ in an interview earlier this month with CNN.

‘It’s violent people in possession of weapons,’ he was then sure to add.

With that said, the city of Chicago’s law enforcement agency – an institution that is nearly 200 years old – has made it clear that they do not stand with the city’s new mayor. 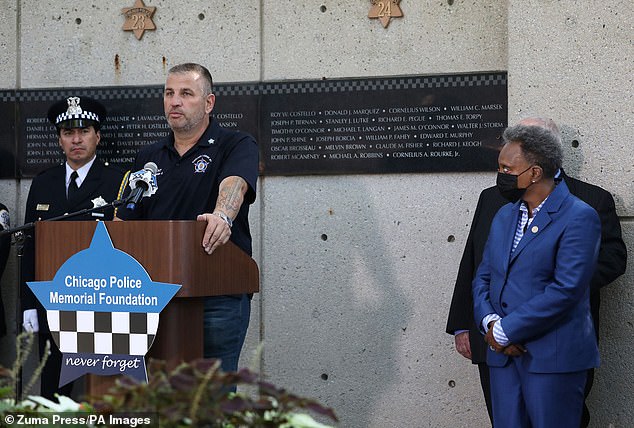 In May, Catanzara’s union issued a vote of ‘no-confidence’ on the mayor, citing poor work conditions and the cancellation of a march for fallen officers because of the coronavirus pandemic.

The vote by the police union, as well as police Superintendent David Brown and First Deputy Eric Carter, was unanimous among as many as 200 active and retired rank-and-file officers, The Chicago Tribune reported.

And the rift between the two party’s only became more pronounced after the shooting death of 29-year-old Officer French – the first fatal shooting of a Chicago officer in the line of duty in three years, and the first of female officer in more than three decades.

French was shot dead and her partner seriously wounded during an armed confrontation with three suspects on the city’s South Side on August 7.

She was one of 10 people killed and 64 wounded by gun violence throughout Chicago that weekend.

Brothers Emonte and Eric Morgan, 21 and 22, respectively, have been charged in the officer’s death, a Chicago Police Department spokesperson announced in August, after allegedly shooting French and her partner after being pulled over during a routine traffic stop.

Emonte Morgan, the younger of the two brothers, was out of jail despite being charged in April for a serious hit-and-run while he was on probation for robbery.

French’s partner, Carlos Yanez, 39, was critically injured in the shootout, but managed to survive, and now faces a ‘potentially lifelong disability.’

A third female passenger in the car has not been charged in the case, due to a lack of evidence.

Lightfoot reportedly received a cold reaction from French’s family and fellow officers at the hospital after the shooting, before she succumbed to her injuries.

At the time, Catanzara’s vice president, Patrick Murray, went as far as to say that the Chicago Police Department has severed all ties with the progressive politico.

‘There is no relationship with the mayor,’ Murray told Chicago outlet NewsNation in August.

Murray went on to say that the only way to repair the relationship would be to elect a new mayor in 2022.