Then came the juice and smoothie bars for ‘clean eaters’ and vegans, offering murky-looking fruit-and-veg concoctions that branded themselves as ‘healthy’ but were often laden with hidden calories.

And then, from the East, came bubble tea.

For the uninitiated, this beverage consists in its most basic form of black or green tea, milk, ice and tiny chewy balls of tapioca dough — shaken together like a cocktail and served with a wide straw so you can suck up those fat and glistening tapioca pearls from the bottom of the cup. 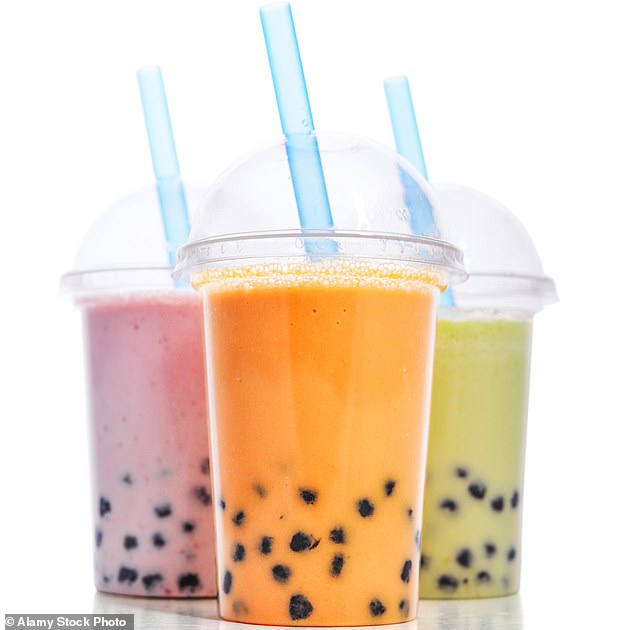 Originating in Taiwan in the 1980s, bubble tea ‘cafes’ and bars offering a dizzying array of creations have been on British High Streets and in shopping centres since the early 2010s and have become a fashionable hang-out spot for teenagers.

But recently they’ve been experiencing a stratospheric growth — proliferating at an extraordinary rate, and all thanks to a surge in popularity on social media platforms such as TikTok, where these drinks have become a new viral trend.

Millions of young people — mostly under 25 — now follow bubble tea ‘influencers’ as they ‘taste-test’ different concoctions on camera, even making their own in every taste and hue.

It’s all bizarrely voyeuristic. People post videos of themselves piercing the drinks’ foil or plastic lids with a straw (to a satisfying ‘pop’), before slurping the pearls, or ‘boba’ as they’re known. (Actually the Chinese slang for ‘breast’, referencing their shape.)

So, then — all a bit of fun? And much safer for our teenagers than cider or vodka gulped round the back of bike sheds?

Well, perhaps not. While green and black teas are famed for their detoxifying benefits, these ‘teas’ are far from healthy.

Only this week, it was revealed that some bubble teas, packed full of different fruit syrups and with endless different topping options such as jellies, whipped cream and ice creams can contain a whopping 800 calories. 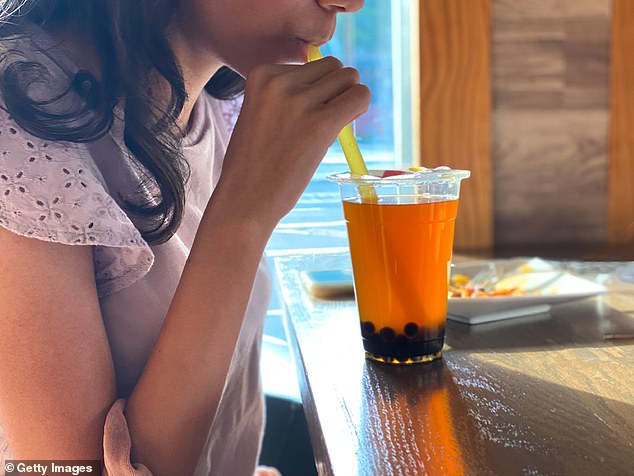 Last week it was reported that childhood obesity in England is at an all-time high — with a shocking 2.5 million children now overweight or obese (file image)

That’s the same as 50 sugar cubes and even eclipses a McDonald’s Big Mac at 550 calories.

Today Britain has nearly 250 shops selling bubble teas, and the main market is teenage girls, lured by the garish branding (to match the eye-wateringly sweet drinks) and who relish the ‘likes’ they get on social media for it.

Bubbleology is the UK’s biggest chain, with 40 stores across Europe, including 17 in Britain. Thanks to this ‘bubble boom’, a stonking 70 more are set to open before the end of the year.

And all this when last week it was reported that childhood obesity in England is at an all-time high — with a shocking 2.5 million children now overweight or obese — partly due to recent increased sedentariness during protracted lockdowns.

And a gut-busting 56 per cent of UK diets now consist of ‘ultra-processed’ foods.

And yet legions of youngsters now seem hooked on so-called ‘meal-in-a-tea’ drinks.

So, for my job as a presenter of the BBC’s The Food Programme, and in the spirit of keeping up with the latest culinary trends, I went out this week to my local branch of Bubbleology in North London to discover more about these beverages which both enthral and, perhaps, endanger our youngsters in equal measure. 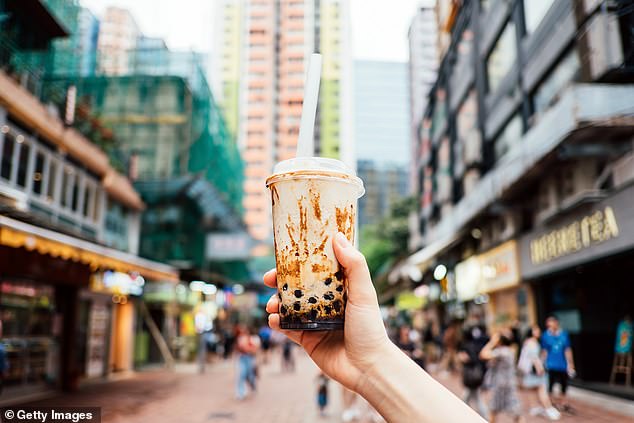 Sheila visited her local branch of Bubbleology in North London, where she learnt the lowest-calorie option still clocks in at 200 calories (file image)

And then came the performance. The ‘boba barista’ scoops in the tapioca balls, pouring the creamy tea on top, then the ice, then the toppings.

I confess, I wasn’t entirely looking forward to the taste. I remember tapioca milk pud — or fish eyes as my friends and I called it — all too well from my school days.

But this is different territory entirely. And I understood the appeal immediately.

First I ordered a pomegranate fruit tea, the lowest-calorie option and yet still clocking in at 200 calories (the milk teas start at a heftier 350 calories) plus the extra 94 calories with the boba.

It tasted intensely of pomegranate. And while sucking balls of pomegranate-impregnated tapioca into my mouth was fairly unique, I can report that they’re soft, slightly chewy — and really rather nice! Certainly a long way from fish-eye pudding.

Emboldened, I moved on to other flavours: next passion fruit, then honeydew and vanilla chai.

In the name of research, of course, I also sampled mango and lychee bobas on top: the possibilities were endless.

My boba barista told me I could have strawberries and cream, Oreo or even banoffee pie. 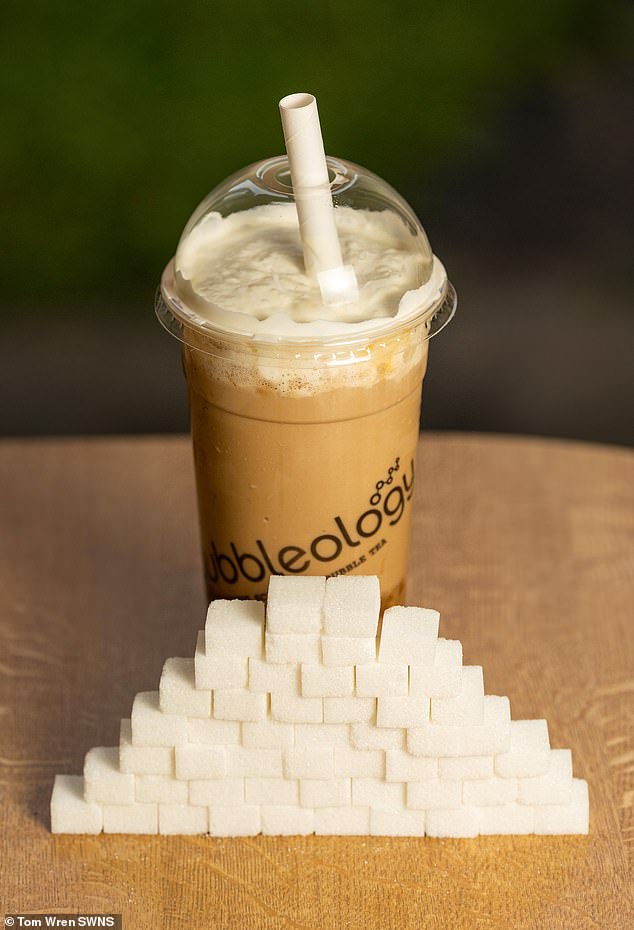 And it doesn’t stop there: there are popping varieties — with seaweed-shell balls that burst in your mouth like popping candy, a wild creation of which Willy Wonka would be proud, although perhaps one that could easily end in milk-spluttering disaster.

There’s even an ice cream version of the drink (substituting out the milk base).

Again, for research purposes, I tried the ‘taro ice cream’, made from taro root — a purple vegetable not dissimilar from a sweet potato or a yam — and it too was rather lovely.

But, above all, my favourite variety included hot balls of molasses with cold milk poured on top to create a delicious, dark brown swirling concoction.

So indeed, in conclusion: all rather delicious, and certainly a treat for when nothing but the sickliest of sweet things will hit the spot.

But, of course, there’s no escaping the fact that they’re laden with calories.

If you’re not careful, you can easily find yourself slurping up piles of sugar in an instant — far more than the 30g the Government says adults should limit themselves to in a day.

Of course, our social media-mad kids don’t care one jot. 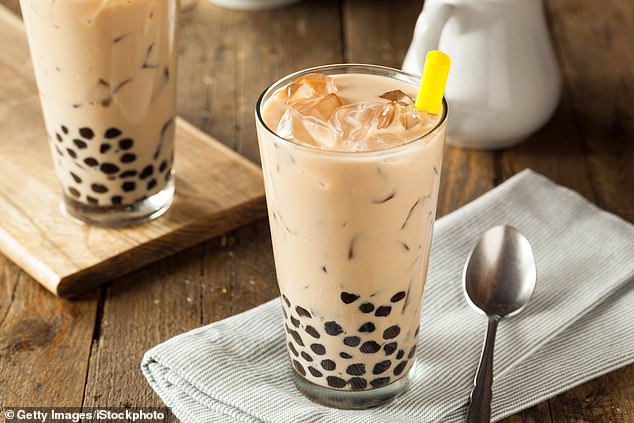 Shelia said the teenagers she talked to were concerned about the nutritional value of the drinks, but see bubble tea as a treat (file image)

None of the teenagers I talked to out on my recce were concerned about the nutritional value of the drinks.

They see them as a treat — but also as a trendy Instagram or TikTok opportunity.

And if they can’t get out to buy them, there are myriad recipes for at-home concoctions, too.

Arriving back, perhaps already on a sugar low, I turned to TikTok at once, where I found plenty of aficionados making their own versions.

Of course the milk and toppings are fairly simple. But to make the tapioca dough, they must be boiled to perfection (30 minutes, then a further half hour to cool). If you over-boil they will be too squishy and stick together, under-do it and they will be too hard to chew. A fine science.

So will the bubble tea bubble burst? And are they simply milkshakes on steroids?

Well, the argument for them sticking around for a long time to come is that they’ve tapped into a large and growing percentage of young people who don’t want to drink alcohol, but do want to go out together for a ‘drink’.

But they’re also, I admit, incredibly unhealthy, and likely only adding to the sugar-filled diets of our woefully overweight population of children — and yet another black mark on the list of the damaging effects of social media.

They’re deceptively moreish and can easily lead to dangerous over-indulgence.

Something I found out myself as I got home and wondered . . . what’s for tea?