A Chicago bride says her entire family missed her Nevada weekend wedding because of mass Southwest Airlines cancellations that left her devastated parents watching the event on FaceTime.

Kimberli Romano, 34, and her husband-to-be Kyle Hlavaty, 37, flew to their wedding destination October 6 without issue, but things didn’t go so smoothly for relatives trailing behind on later flights.

Her Chicago-area parents and siblings were set to fly in for the Valley of Fire wedding on October 9, a day before the ceremony, but were among those affected by Southwest’s abrupt cancellation of more than 1,800 weekend flights.

‘So, I call my parents immediately and told them double-check everything because we just got notification that the flight was canceled,’ Romani told CNN.

‘And, of course, it turns out that it was, and I was freaking out. I was so emotional’ 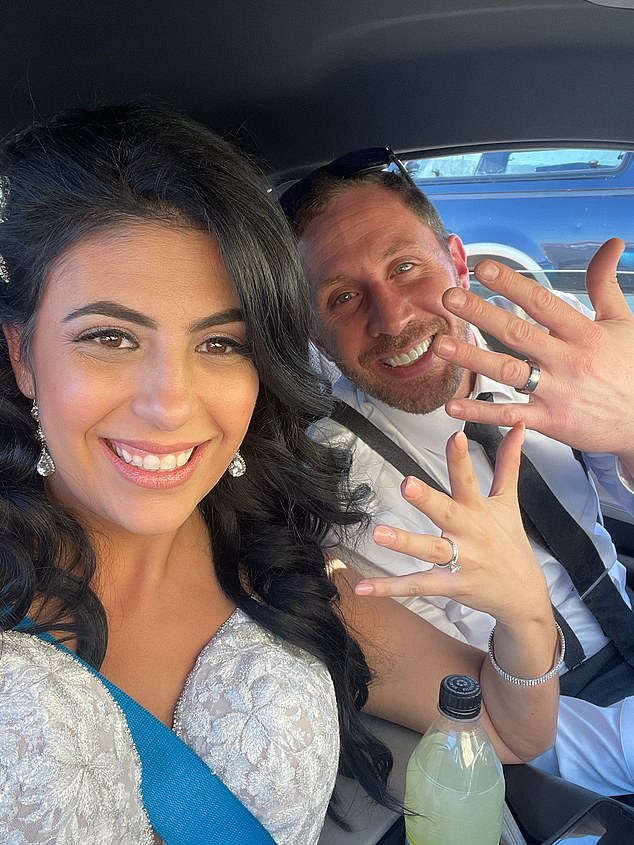 Kimberli Romani, 34, and Kyle Hlavaty, 37, were married Sunday in Nevada’s Valley of Fire 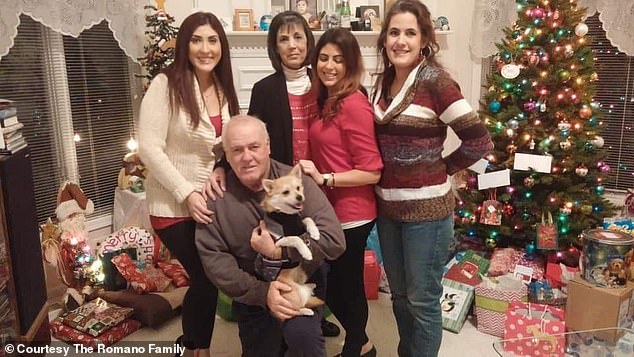 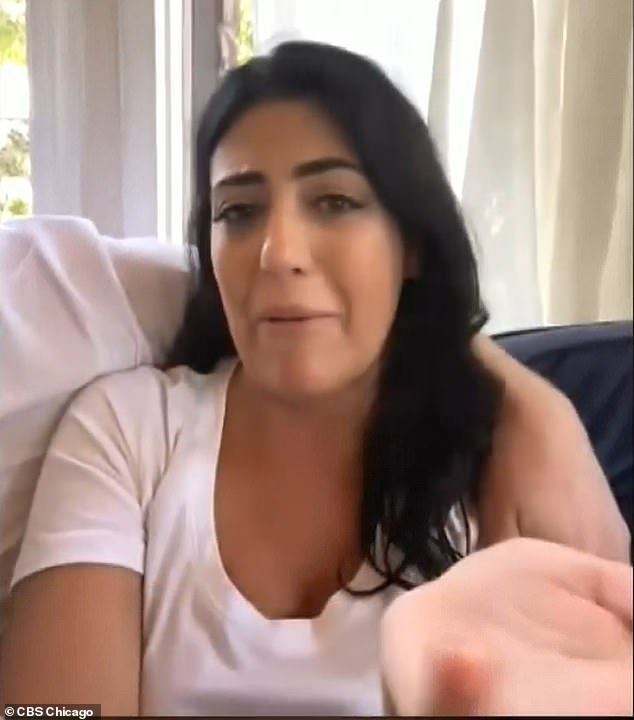 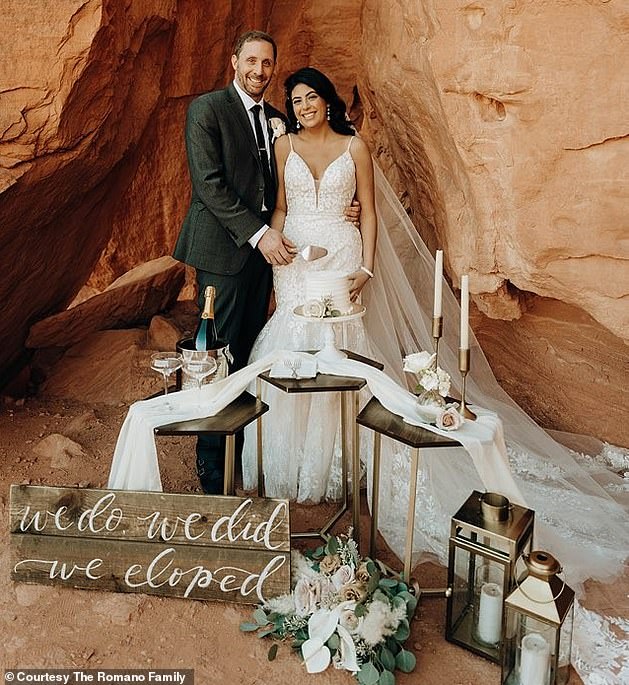 Although the sign indicates the couple eloped, the wedding was meticulously planned

She said she managed to book her parents another flight from Milwaukee the morning of the October 10 wedding, but it also was cancelled.

Aside from her husband’s mom and aunt – who flew to Las Vegas earlier in the week – no family was able to witness the special occasion in person.

Romano said her parents watched the ceremony via FaceTime.

‘Service was spotty because we were up in the mountains and everything, but my mom said that she was able to see most of it,” Romano said. “She couldn’t hear anything but she could see most of it.’ 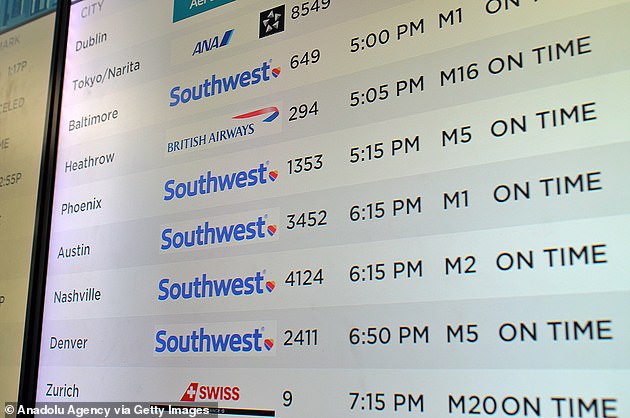 Southwest cancelled nearly 1,800 flights on the weekend, including the flights of Romano’s parents and sisters, who were planning to attend the desert wedding 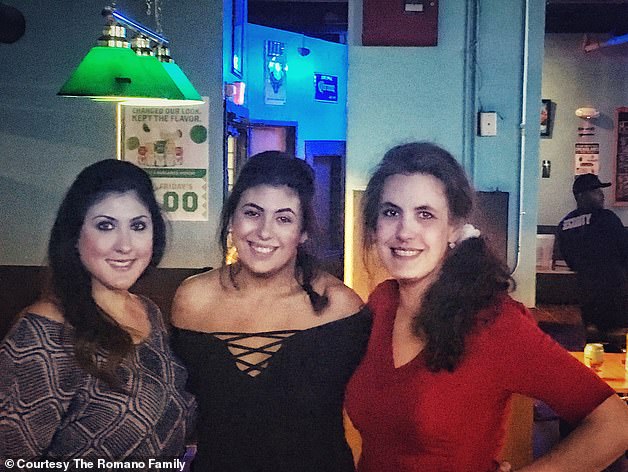 Romano is pictured (center) with her sisters, who were supposed to be bridesmaids

Southwest Airlines on Monday issued ‘a tremendous apology’ to its customers and said the weather was to blame for the cancellation of almost 2,000 flights during the weekend.

The Dallas-based airline refuted claims that employees striking in protest of a vaccine mandate caused staff shortages that forced the mass cancellations.

The nixed flights prevented Romano’s family from attending the special occasion, although a few of her bridesmaids who flew in earlier did attend.

However, her father wasn’t able to walk her down the aisle, and her mom couldn’t help her get ready for her big day.

‘It’s unbearable for a lot of people,’ Romano told CNN. ‘And it’s very, very disappointing. I’ve defended Southwest for so long and been a loyal customer of theirs for so long, and the way we were treated at the airport – they were so rude and disrespectful and had absolutely no remorse for anything. It’s very upsetting.’

Back in Illinois, Romano’s parents and older sisters were scrambling to make the wedding. They spent hours researching other flight options, but couldn’t find one that would get them to the 1 p.m. wedding on time..

Although the wedding was in Las Vegas, it wasn’t an elopement.

It was a planned ceremony with a lot of thought and money put into it, the bride’s sister Renee Romano said.

Romano was the first daughter in the family to get married, and her parents were devastated to miss it, her sister said.

‘They’re really torn up about it. They’re still very upset,’ Renee Romano told DailyMail.com. ‘I think the (sadness) has turned into anger, because it’s just unbelievable that this could happen – and that Southwest allowed it to happen, and had no backup plan in case something like this would have happened.’ 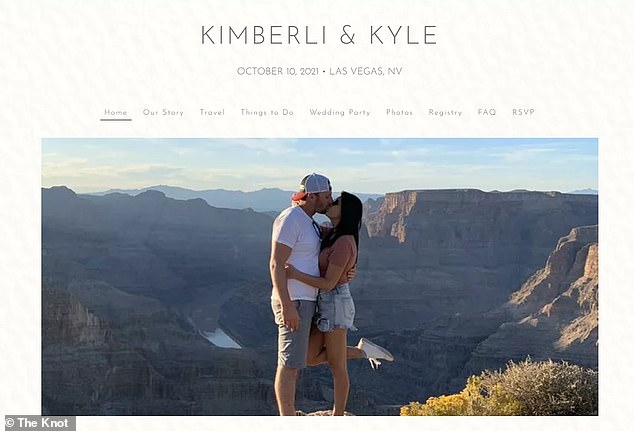 Although the couple tied the knot in Vegas, it was a planned ceremony, not an elopement

Now, Renee Romano said she’s trying to get a refund from Southwest, which offered a flight credit to use on a future trip.

‘I don’t want to use it for future flight,’ she said. ‘I don’t want to fly with them again after all this craziness, not knowing if this is ever going to happen again. I want my money back, so we’re going to try and work on that and see what happens.’

Southwest told Dailymail.com on Thursday that they reached out to the bride to offer their ‘sincere apologies’

The airline has been distributing ‘we’re sorry’ vouchers to passengers affected by its cancellations, with values reportedly ranging from $100 to $250.

‘We know things didn’t go as planned when traveling,’ one voucher said, according to USA Today. ‘We’re so sorry for the disappointment this disruption caused and want a chance to make it up to you.’