On August 4, 2021, an aged woman was declared missing in Akepe area of Osogbo, the capital of Osun State after a heavy downpour that lasted for about four hours. Her body was later found under a cabinet in her apartment after the flood wreaked havoc.

“The flood was so heavy that it fell the wardrobe on the poor old woman. It seems she had drowned in the water already because she was a short woman. She couldn’t have survived it. She was popularly known as Iya Rodo,” a neighbour, Mutiat Sanni narrated.

At least, three corpses – including a 19-year-old girl – were found while the perimeter fence of the Osun State Government House in Oke-fia was damaged – multi-million naira property were damaged by the heavy downpour that wreaked havoc in Osogbo, the state capital.

Businesses dealings in cement, flour, pharmacy, Gas stations, bakeries, boutiques and provisions stores were affected including Churches. Residential houses were also destroyed. The flood sacked most residents of the areas from their houses.

This could have been the story again on September 2, after another torrential downpour wreaked havoc in Osogbo. 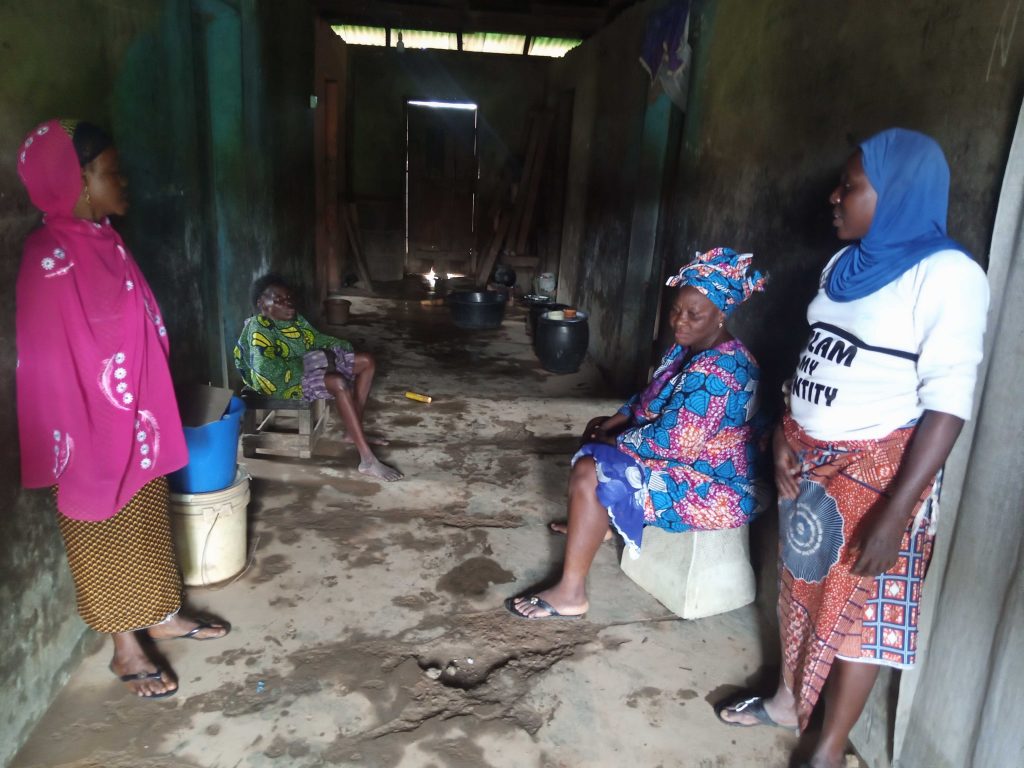 Sanni lives close to a neighbour’s house next to the building where two old women, both above 80-year-old and a young man who had travelled lived.

“If not for the men that were around, that same rain would have affected/killed these two old women. They could not even struggle anymore until those men rescued them.” Sanni told our correspondent who visited the affected areas a month after the torrential downpour wreaked havoc and sacked residents, also destroying businesses in Osogbo.

“Our houses were affected by the rain again. All the rooms were not left out. The rain affected everywhere. These two old women could not sleep in the house. We had to take them to a neighbour’s house. Thanks to the two young men who were around.

“Yesterday, we were so frightened. We could not rest. We kept checking on the mamas to ensure that they were fine. A windstorm accompanied the rain. Everyone was scared. We were just praying that God would help. We seek a solution to this rain disaster. There are just three here. The two mamas and a young man. The man has travelled.

“That first rain damaged a lot of things. Mamas could not sleep here for two days. They were with us. Even when they came back after two days, the water had not dried up. All their clothes were damaged. They spent almost two weeks washing their clothes. A lot of property were destroyed here. Foodstuffs gone. A lot of things were washed away, including money.

In August 2019, there was tension in Osun State over a sudden increase in Osun River which later turned to torrent floods, displaced hundreds and destroyed property worth millions of Naira. 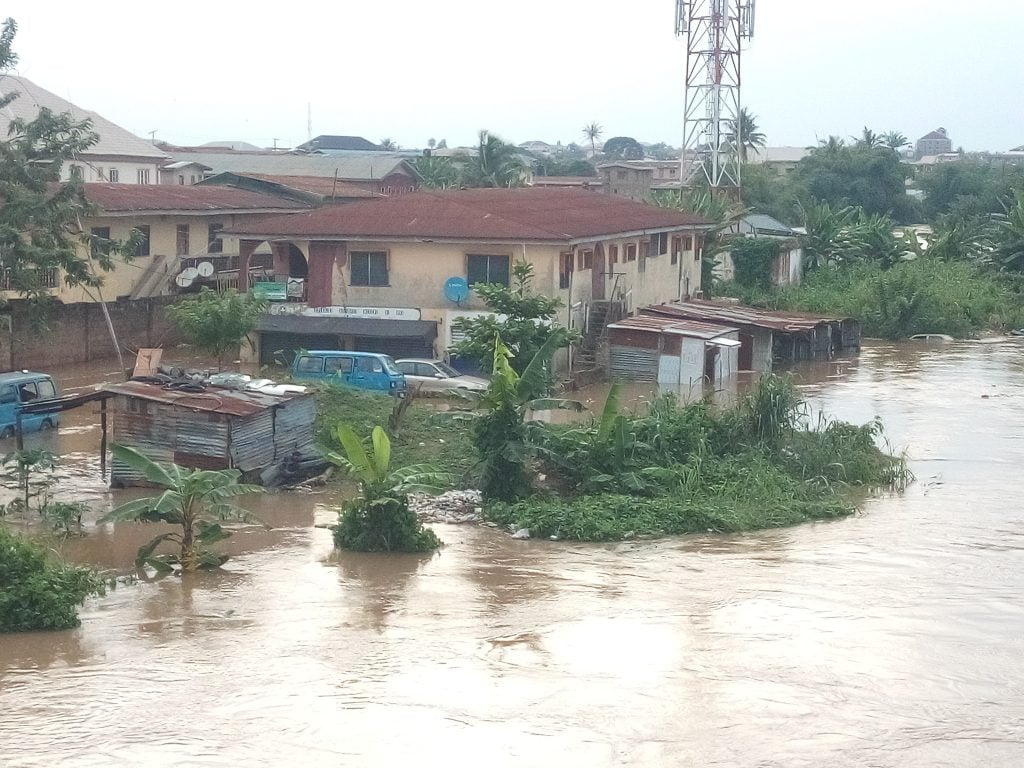 According to the victim’s account, the surge which displayed Baale of Ibu-amo from his house started around 5PM on Friday, August 30, 2019 which later turned to torrent flood. The Osun State Governor Gboyega Oyetola who visited the affected areas on Sunday evening, September 1 ordered those residing in flood-prone areas to take necessary precautions to avoid loss of lives. Oyetola pointed out that the water flow from Ekiti State which may not stop soon is huge and the topography of Osun is sloppy which caused the overflow of the river.

However, knowing very well the landscape of the state, flood still ravages Osun yearly while waterways have not been cleared since last year. 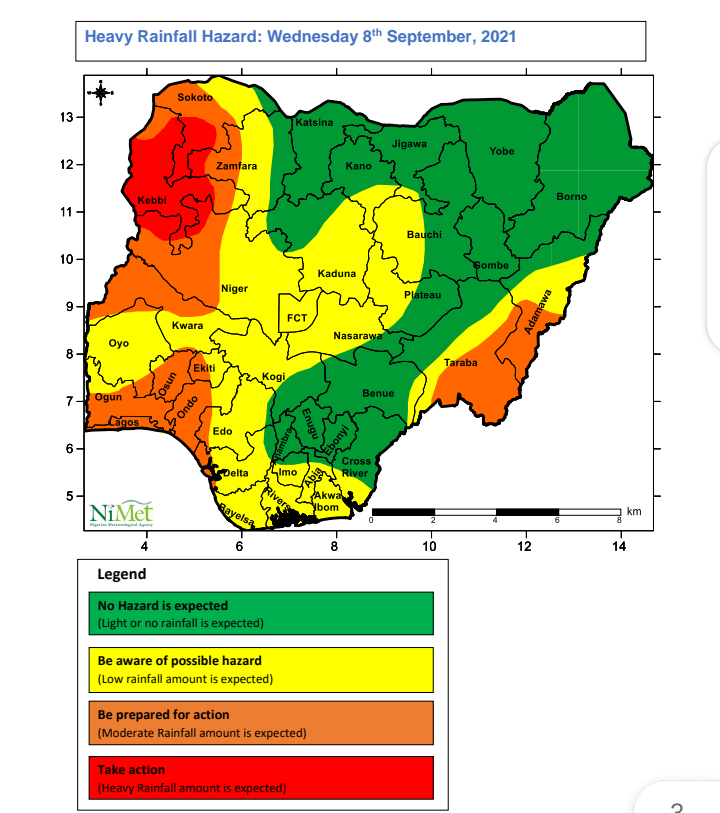 “Due to the presence of good amounts of soil-moisture and the expected heavy rainfall, there are increased chances of flash flood event on roads, settlements, farmlands and bridges, there are also chances of reduced horizontal visibility which can disrupt vehicular traffic and flight operations. Hence, the public is advised to exercise restraint, avoid low-lying areas and fast flowing runoff waters.”

According to the agency, there is a possible hazard for Osun State and warned the state government to be prepared for action in the coming days.

According to experts, the Osun landscape is sloppy and is described as a lowland that can experience floods whenever there are heavy rains in a neighbouring States such as Ekiti and others. They asked the government to be more proactive to curb flooding and put a stop to the loss of lives and property.

An aged man, Jimoh Akanmu who owns a 14-room face-to-face house in Obate area, beside Owo-eba bakery, Osogbo narrated how he, his son Musiliu and his wife, Elizabeth, grandchildren and his other 12 tenants slept in the ceiling after downpours. The 75-year-old Akanmu said the water got to them in surprise and they could not risk going out to seek shelter in another place due to a well outside the house that the flood had covered.

“No one can guess where the well is located because the flood had covered everywhere. To avoid being drowned in the well, we had to climb the ceiling with the help of my tenants. The water covered the house, the only place for us was to sleep in the ceiling till after 24 hours when the water had reduced.

Yesterday night too, the rain had stopped falling already. We were about to sleep when the flood took over. We had to sleep on the roof again. We climbed up a ladder. My son and his wife slept on the roof with another tenant,” Akamu said, stating that all the tenants had left the house since the first rain in August, leaving only one person.

Elizabeth Musiliu who is father-in-law of Akanmu narrated how she and her 3-year-old son landed in the hospital after the August downpour. 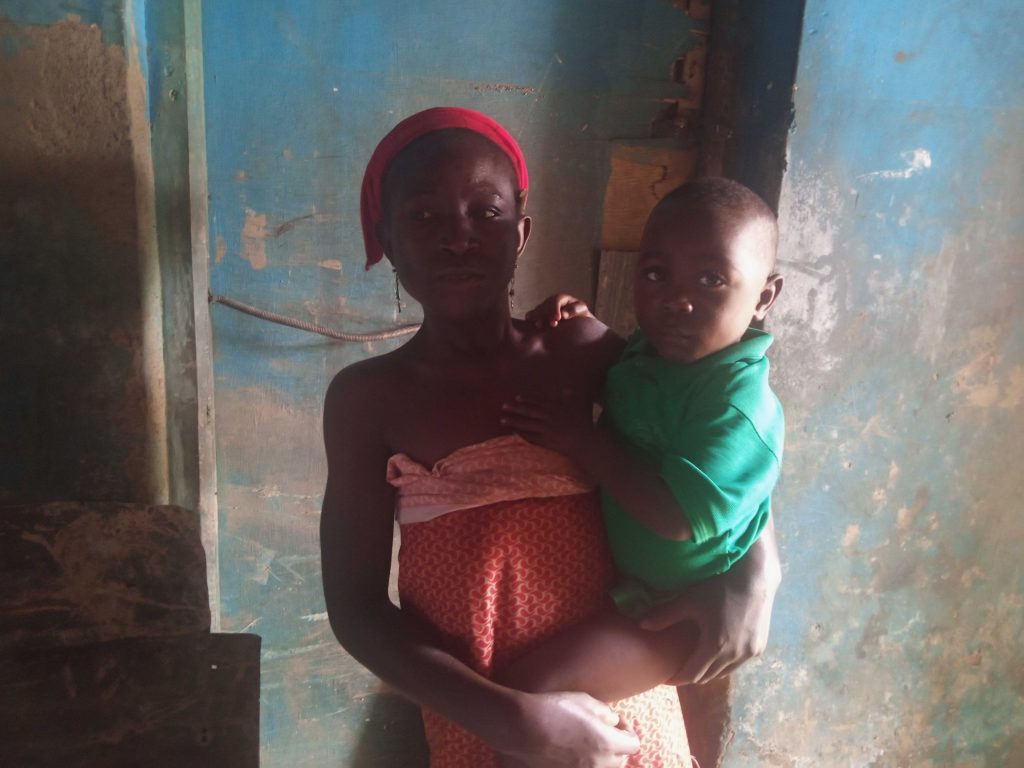 “My son and I landed in the hospital two days after we climbed down the ceiling. We spent N17,000 at the hospital. Now, I have sent my other children to live with some of my relatives. You can even see the traces of both the initial flood and that of yesterday’s own. The flood entered through the windows.

Many houses have crumbled due to this same downpour while businesses worth millions were destroyed by the torrential rains. Hundreds of people in Osogbo were left homeless. Some of the victims who spoke with this medium said they now sleep in shops, with relatives or acquaintances. 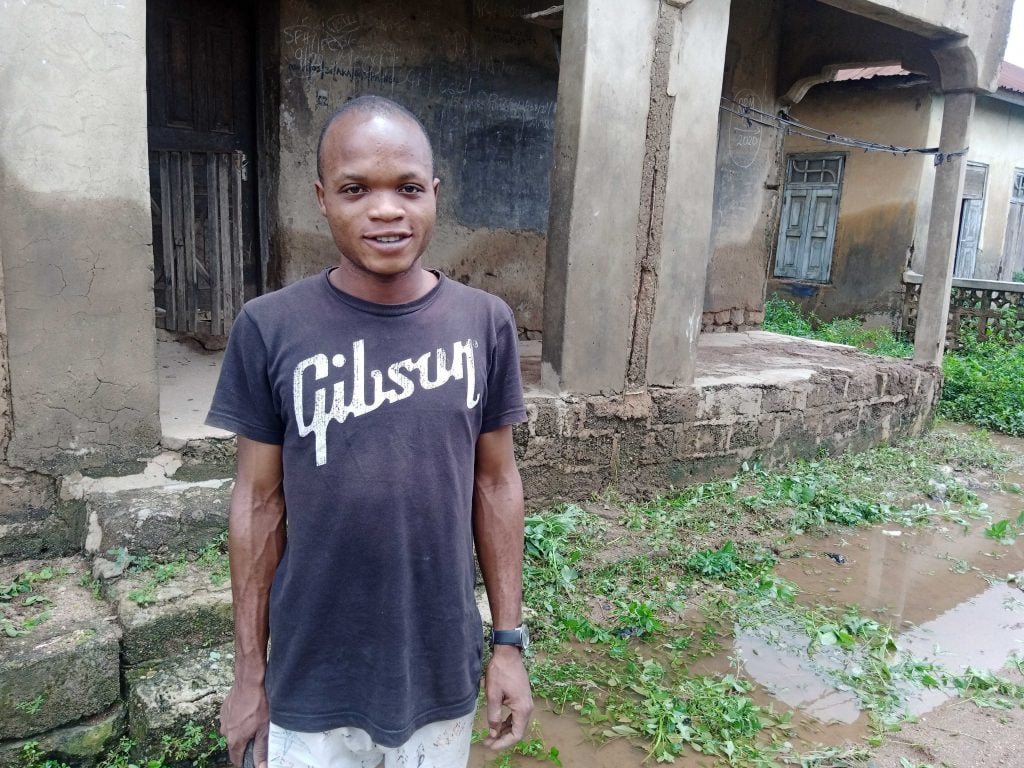 Flood has expelled a 26-year-old Olatunji Omotayo from his house in Akepe area of Osogbo since a month ago. Omotayo said he is sleeping in his shop since August when the flood ravaged the area including his residence. He told our correspondent that he and his co-tenants left home for their safety.

“I have not been home for a month. I just arrived. I left the house for my shop after the first flood disaster. I decided to come and check the house due to this recent rain in case of any destruction. We are just two in this house. On a normal day, about thirteen people live in this storeyer building comfortably.

“Those who live in one of the nearby houses have packed out. They did after the first downpour killed an old woman in that house. The rainfall was quite heavy. It was very high. I was almost immersed in it. It almost reached my head.

Bilikisu Mayomilegbe, and her mother, Simbiat along with her tenants housed in Obate area were also displaced by the torrential rains that fell in August in Osogbo. Mayomilegbe said she sought shelter from some acquaintances in Kasimo area while her mother went to Sabo area. 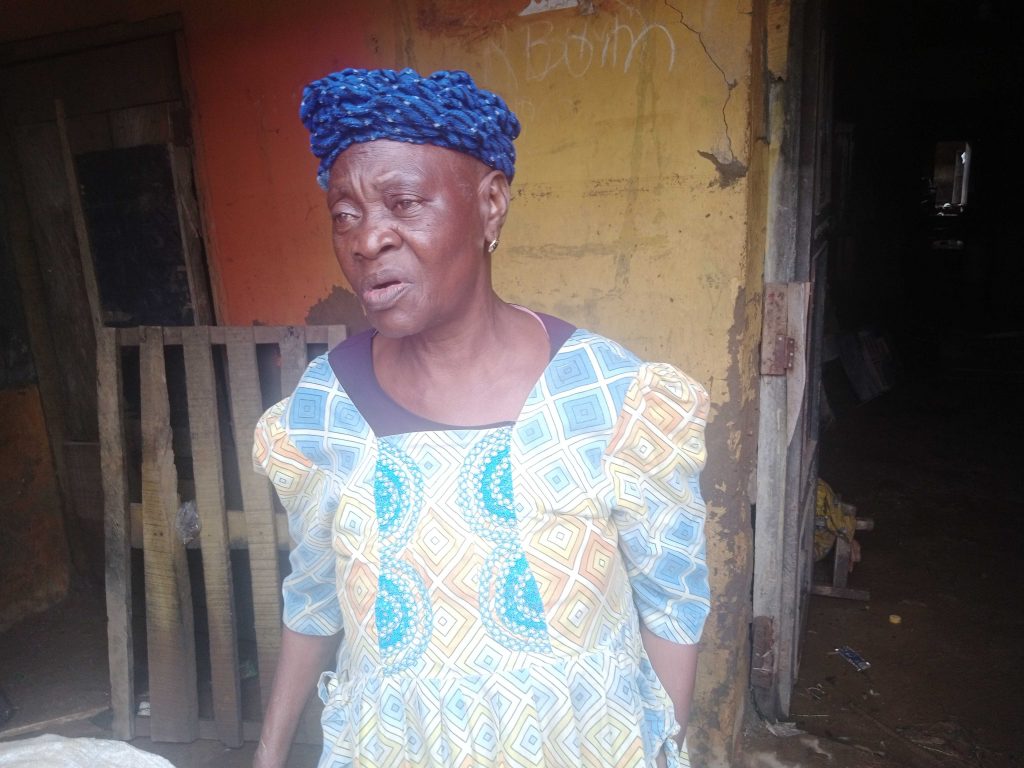 According to her, other tenants spread everywhere to seek shelter after the rain water had destroyed their belongings and businesses. “My own name is Bilikisu Mayomilegbe while Mama is Simbiat Muibi. There are about thirteen rooms here, but almost everyone has gone. After the previous downpour, we had to leave. We came back, hoping that it would be the end of it. Our money and goods were washed away in the rain.

“If you check the building, you can even see the spot showing how high the last downpour was. The entire building was almost covered by the water. Even though property and money were lost in the first rainfall, we thank God for life. We were just concerned about our lives and going out safely. Our food items, everything was washed away. 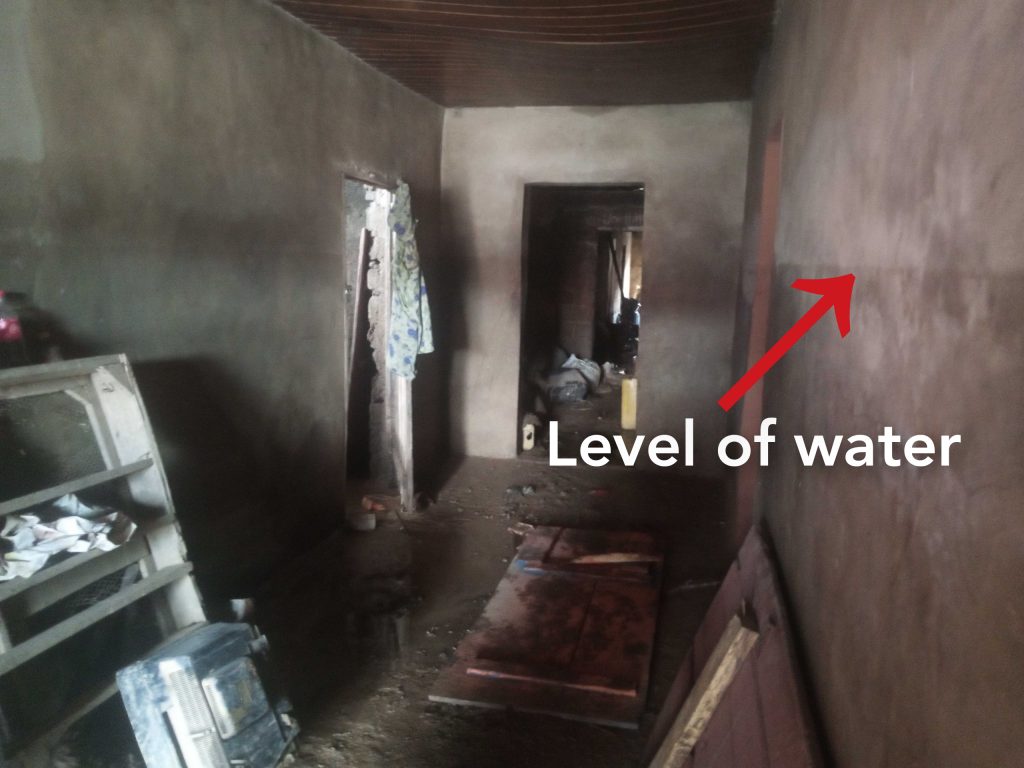 “I had about 200,000 Naira worth of goods. I sell Kola nuts. They were destroyed in the rain. Mama sells planks. The first rain washed them away. We can’t even calculate the amount destroyed. A lot of planks were carried away. The rain destroyed a lot of things. It was the same rain that destroyed that building adjacent to this place. If not for the fact that this house was built with quality materials, it would have given way. Many houses have crumbled due to this same downpour. The river is not even close to this place. Yet, water is destroying houses.

Victims were more concerned about the government dredging the river ways. According to some of the victims who spoke with this medium, renovation of the building or any government’s intervention without taking care of the river would later result in loss if the incidents reoccur again.

“We are just hoping and praying to God. The government should help us with that river. For the nine years when Aregbesola was still the governor, he tried his best then. This present government should also inform the federal government to come to our aid just as the previous administration did. As big as Osun-Osogbo is, it doesn’t destroy houses or property,” Mayomilegbe said.

Also when contacted, the State Commissioner for Environment & Sanitation, Sola Oladepo, promised to get back to our reporter but had not done so before this publication.