Alexander Litvinenko’s widow Marina has told how she ‘gives her husband life’ by continuing to speak about his murder at the hand of the Russian state, 15 years after his death.

Litvinenko, a prominent critic of the Kremlin, died on November 23, 2006, three weeks after drinking green tea laced with Polonium 210 at the plush Millennium Hotel in London‘s Mayfair.

Britain has long blamed the attack on Russia, saying he was poisoned by the two men he met at the hotel that night, Andrei Lugovoi and Dmitry Kovtun.

In September the European Court of Human Rights agreed and ordered Russia to pay £105,000 in damages to Mrs Litvinenko.

Speaking to LADBible, Mrs Litvinenko said she promised her husband, whom she affectionately called ‘Sacha’ that she would keep telling his story. 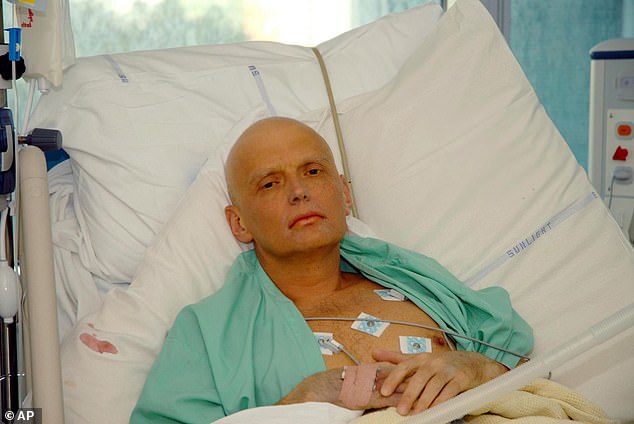 Promise: Alexander Litvinenko’s widow Marina has told how she ‘gives her husband life’ by continuing to speak about his murder at the hand of the Russian state, 15 years after his death 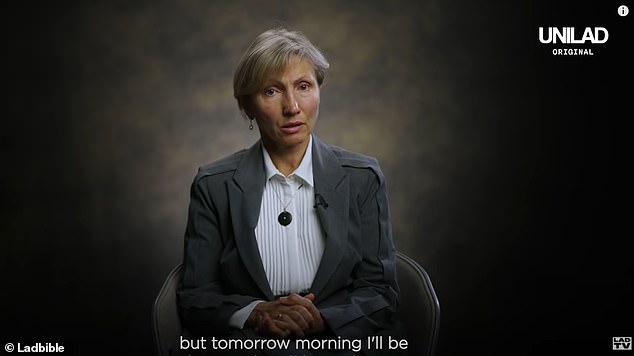 Speaking to LADBible , Mrs Litvinenko said she promised her husband, whom she affectionately called ‘Sacha’ that she would keep telling his story

She said: ‘I believe one day we will have proper justice. People who committed this crime need to go on trial. What I promised to Sacha, I promised to him if somebody wants to listen, he asked me “Please talk to them. Please talk to people. Say what happened to us.”

‘It might help people to prevent something, to protect them, I don’t know but I do what Sacha asked me.

‘And because of what I agreed to do, giving interviews, meeting people, it means he’s always around. I’m happy. I gave him this life.

‘I feel sometimes I’m protected by him too because my life was not miserable for these last 15 years. There was a lot of happiness. It was a chance to see our son became an adult. It was not easy. It was very difficult. But it’s exactly why I’m doing this. They killed Sacha physically, but he’s still alive.’

Alexander Litvinenko was born in 1962 in the Soviet Union – started life as a platoon commander for the Ministry of Internal Affairs before being recruited into the KGB in counter-intelligence, but later flipped to become a critic of the Kremlin and Putin.

He also served for a time as Boris Berezovsky’s bodyguard.

In 1998, Litvinenko fell out with FSB leadership when he backed Berezovsky who had accused senior FSB officers of ordering his assassination.

He was subsequently dismissed from the organisation, arrested, and twice appeared in court on charges of exceeding his authority – but saw both cases quashed. 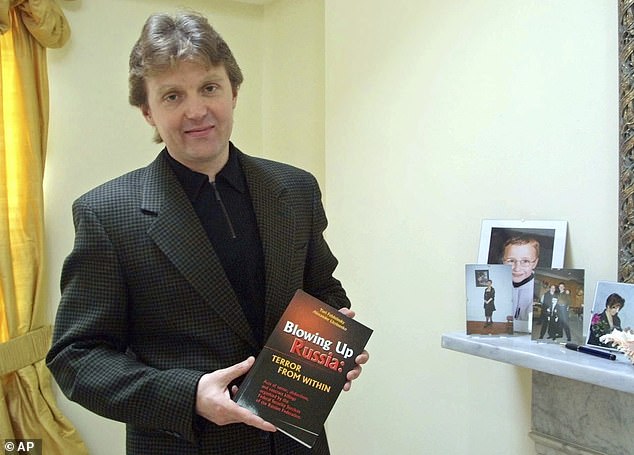 Alexander Litvinenko, pictured in 2002, was born in 1962 in the Soviet Union – started life as a platoon commander for the Ministry of Internal Affairs before being recruited into the KGB in counter-intelligence, but later flipped to become a critic of the Kremlin and Putin

Fearing for his life, Litvinenko fled to London in 2000 with second wife Marina and was granted asylum in London. The couple had a son, Anatoly.

Litvinenko then moved to Boston, Lincolnshire, where he worked as a journalist, author and consultant for British intelligence.

During this time he wrote two books accusing the Russian state of staging apartment bombings and other terror acts to bring Putin to power. He also coined the phrase ‘mafia state’.

In October 2006, he accused the Kremlin of being behind the death of journalist Anna Politkovskaya – another prominent Kremlin critic who was fatally shot in the elevator of her apartment building in Moscow. 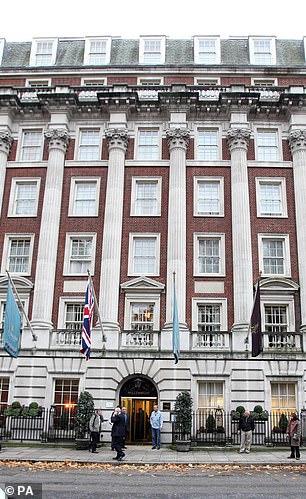 Litvinenko, a prominent critic of the Kremlin, died on November 23, 2006, three weeks after drinking green tea laced with Polonium 210 at the plush Millennium Hotel in London’s Mayfair, pictured

Just a few weeks later, Litvinenko fell suddenly ill after meeting with Lugovoi and Kovtun at the Millennium Hotel to drink tea.

Three days later, Litvinenko took himself to hospital in Barnet before being transferred to University College Hospital as his condition worsened.

Mrs Litvinenko told how she and her husband tried to talk about ‘the future’ while he was dying in hospital.

‘We talked about when he will leave hospital, what he was going to do,’ she said.

‘Because he couldn’t eat and his dream was when he will return home I will buy him pineapple and I will cut it into small pieces and put it in the fridge and he will eat it, cold pieces, and just enjoy it. We tried to talk about very normal stuff.’

His health slowly deteriorated and Mrs Litvinenko witnessed him becoming weaker and weaker.

‘But he still had three days to talk to the police,’ she said. ‘It means police still had all the statements from Sacha. About his meetings, where he went.

‘Sacha was professional and knew exactly what he should say to help to investigate this case. It means a person who was murdered investigated his own case.

‘The day before [he died] he was very weak, there were no more interviews with police. He said just a few words. When I was ready to go home, I said Sacha, “I’m going home because Anatoly is waiting for me. But tomorrow morning I will be here and I will be with you”. And he just told me, “Marina, I love you”.’

Hours after Marina left, on the night of November 23, Alexander passed away.

The day after his death, friend Alex Goldfarb read a statement that Litvinenko had dictated in which he blamed Vladimir Putin directly for his killing. 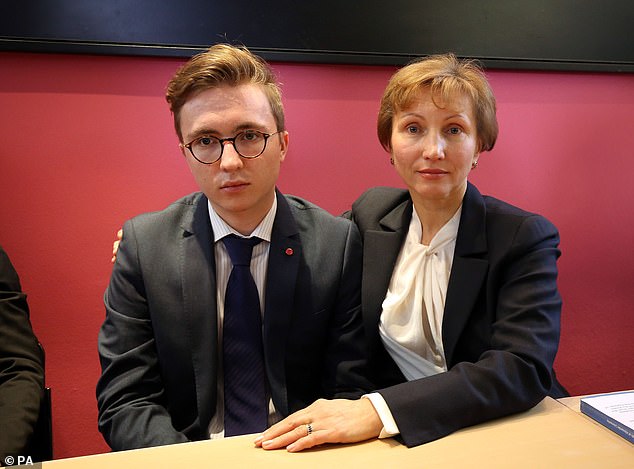 Mrs Litvinenko said she was pleased she was able to see their son, Anatoly, grow up, even though it has been a ‘difficult’ journey. Pictured, mother and son in 2006

Russia has always denied any involvement in Litvinenko’s death, which plunged Anglo-Russian relations to a post-Cold War low.

A lengthy British inquiry concluded in 2016 that Putin probably had approved a Russian intelligence operation to murder Litvinenko.

It also found that former KGB bodyguard Andrei Lugovoy and another Russian, Dmitry Kovtun, carried out the killing as part of an operation probably directed by Russia’s Federal Security Service (FSB), the main successor to the Soviet-era KGB.

In September The European Court of Human Rights issued a ruling in response to a claim brought by Mrs Litvinenko, stating the Russian state is responsible for the 2006 murder.

‘Russia was responsible for the assassination of Alexander Litvinenko in the UK,’ a ruling issued by six of the seven-member Strasbourg court said – with the sole Russian judge dissenting.

The court – which rules on whether states that have signed up to the European Convention on Human Rights are in breach of it – also found that Russian insufficiently investigated the killing, meaning no arrests were made on its soil.

Ms Litvinenko – who married then-FSB agent Alexander in 1994 and had a son, Anatoly, with him – had been claiming some £3million in ‘punitive’ damages for his death along with loss of income.

The court ruled against the majority of the claim, saying it does not award punitive damages and that other paperwork was submitted late.

Ms Litvinenko had brought her case before the ECHR once before, in 2007, when it was suspended because a public inquiry was underway in the UK.