One of the twin sons of Comedienne and Ghanaian media personality, Afia Schwarzenegger has reacted to trending picture of his mother passionately kissing his twin brother, just after actress Akuapem Poloo was jailed for 90 days over a nude photo shoot with her underage son.

However, Ghanaians on social media dug up old photos of Afia kissing her son, telling her she’s guilty of what she slammed Akuapem for and blasted her as some revealed she is next to be arrested.

After news portals made headlines with those pictures of Afia Schwarzenegger and her son, the comedienne reacted as she took a screenshot of a publication by GhanaWeb and shared on her Instagram page.

In reaction, Afia Schwar disclosed that she kisses her children on every part of their faces.

She boldly dared anyone to take legal actions if they think she is wrong to do that with her twin boys.

I do kiss my children on every part of their face.

If you have any problem with it…lets give the LAW a test..
Ghanafuor bi nom 3ne Gyimii de3 ay3 s3 Akuapem poloo ne Nsawam.

After Afia Schwar’s post, one of her twin son in a video cleared the air on viral pictures of his twin kissing their mother on the lips. 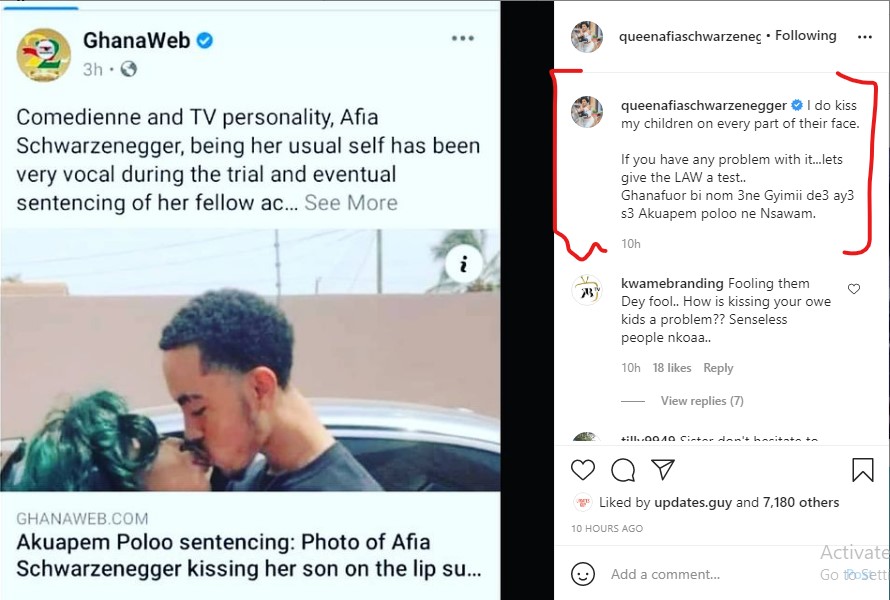 According to him, He stated that he and his twin brother are above 18 and that his mother, Afia Schwar can kiss them on the lips. He added that the photo has no correlation to child abuse as claimed by many.

Watch the video below: