A group of House Republicans wrote a letter Monday demanding information from the Bureau of Alcohol, Tobacco, Firearms and Explosives (ATF) that they feel could prove the agency is creating an unlawful federal gun registry.

‘It is critical that the [ATF] does not use its power to encroach on the privacy of gun owners and restrict their Second Amendment rights,’ the letter reads.

It comes after a report earlier this month found that the Biden administration has been compiling records of 54 million gun owners to possibly create a database of Americans who possess a firearm.

The letter from 52 Republicans, led by Texas Representative Michael Cloud, requests the agency provide answers to five questions posed in the letter by the end of the year.

In the queries addressed to Acting ATF Director Marvin Richardson, the lawmakers express they fear the new rule could be a workaround of Congress’ prohibition of a federal registry of gun owners.

Details emerged this month that the ATF was collecting and keeping records of firearms purchases from stores that went out of business.

The questions in the letter include how many records the ATF’s Out-of-Business Records Centers (OOB) have collected in total and how many have been processed into digital format.

It also questions if the collection of these records helped lead to the prosecution of violent criminals over the last three years – and how far back those records date. 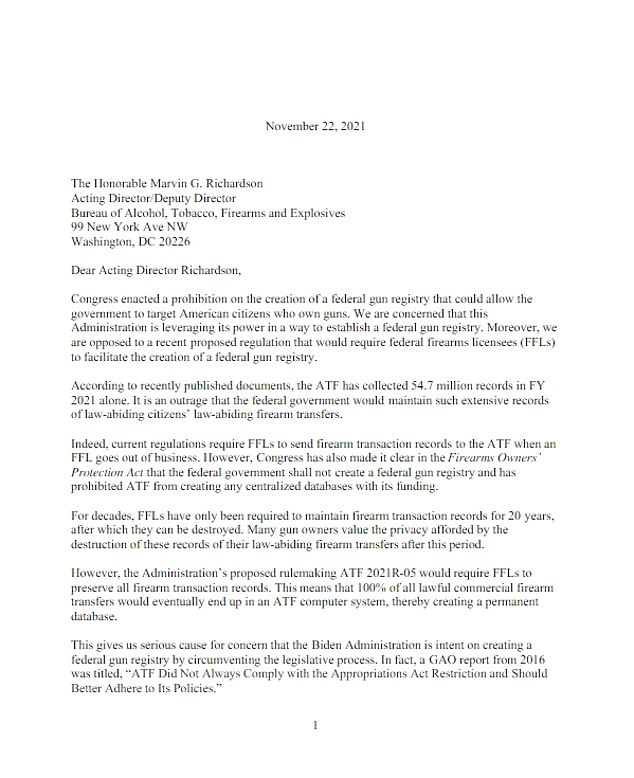 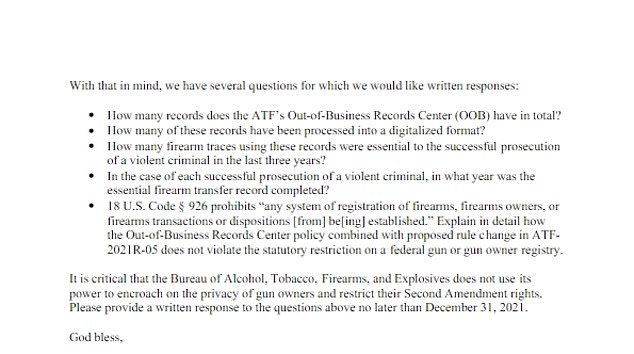 The letter continues: ’18 U.S. Code § 926 prohibits ‘any system of registration of firearms, firearms owners, or firearms transactions or dispositions [from] be[ing] established.’

‘Explain in detail how the Out-of-Business Records Center policy combined with proposed rule change in ATF-2021R-05 does not violate the statutory restriction on a federal gun or gun owner registry.’

‘Please provide a written response to the questions above no later than December 31, 2021,’ it adds.

Those notable lawmakers who signed on the letter include Lauren Boebert of Colorado, Andy Biggs of Arizona, Madison Cawthorn of North Carolina, Ronny Jackson of Texas, Jim Jordan of Ohio, Elise Stefanik of New York and Matt Gaetz of Florida.

ATF documents obtained by the Washington Free Beacon show the agency is keeping tabs on U.S. citizens who have purchased firearms in order to keep their personal information in the hands of the federal government.

The agency was able to obtain the information by using a process where the ATF can collect and store records on private gun transactions from licensed gun stores after they go out of business.

The information is stored at a federal site in West Virginia. There are so many records stored at this location that several years ago, The New York Times reported, the floor collapsed.

The practice of collecting these records has drawn criticism from Pro-Second Amendment groups who say the Biden administration is using the information to create a national database of gun owners, which is against U.S. law.

Record preservation of this nature means that, eventually, every American gun owner’s information regarding their purchase would end up in the hands of the ATF.

The revelations of the record-keeping comes as the Biden administration prepares to propose a series of firearms-related regulations. 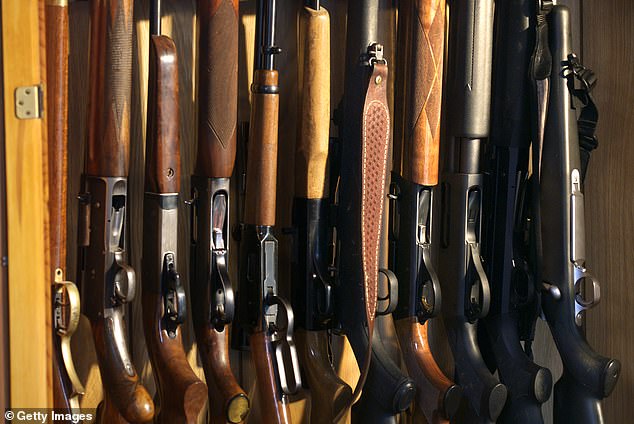 The Biden administration has been collecting information of 54 million U.S. gun owners in an apparent attempt to create an unlawful national database of firearms owners 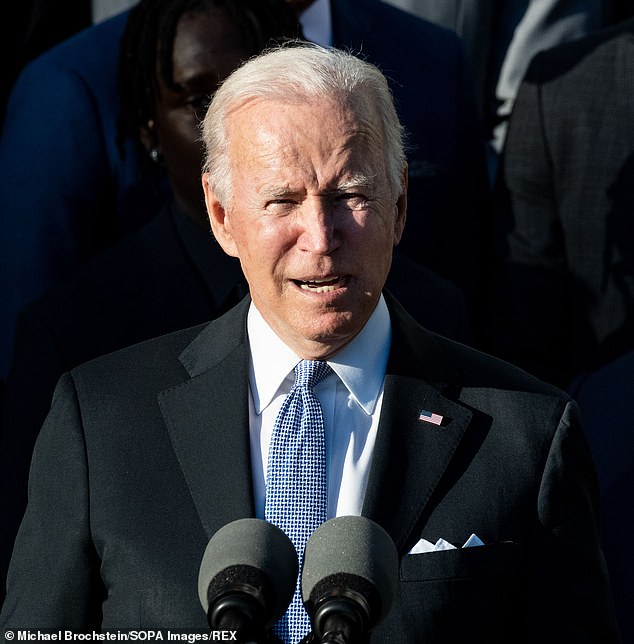 The move concerns pro-Second Amendment advocates who fear Joe Biden unveiling new restrictions on purchasing and owning a firearm in the U.S.

In fiscal year 2021, the ATF processed 54.7 million out-of-business records, according to the internal documents obtained by firearms advocacy group Gun Owners of America and provided to the Free Beacon.

The internal documents show that 53.8 million were paper records and another 887,000 were electronic from locations that went out of business.

The Gun Owners of America’s director of federal affairs, Aidan Johnston, said: ‘As if the addition of over 50 million records to an ATF gun registry wasn’t unconstitutional or illegal enough, the Biden administration’s misuse of ‘out-of-business’ records doesn’t end there.’

The Gun Control Act of 1968 mandates licensed firearm dealers who close down must provide their record to the ATF to be processed and maintained in a database that cannot be searched by the name of the person who purchased the gun.

The agency says after the record is created, the physical records are destroyed.

But this practice has faced a new line of scrutiny as President Joe Biden prepares to implement new restrictions on purchasing and owning a firearm.

One proposal from the administration is requiring gun owners to register or destroy certain sizes of pistol braces, which are stabilizers used on popular firearms like AR-15s. Other proposals include red flag laws that could prevent people from purchasing a gun in the first place.

Johnston told the Free Beacon: ‘The Biden administration has forced ATF to undertake the rule-making process in record time—resulting in faulty argumentation and demonstrating that neither ATF nor Biden’s anti-gun appointees know anything about the firearms and accessories they seek to regulate.’

The ATF’s registry site for closed locations has been a battleground between gun advocates and the federal government for years. For example, those in favor of more restrictive gun measures want the ATF to digitize this registry and create a federal database of gun owners in the U.S.